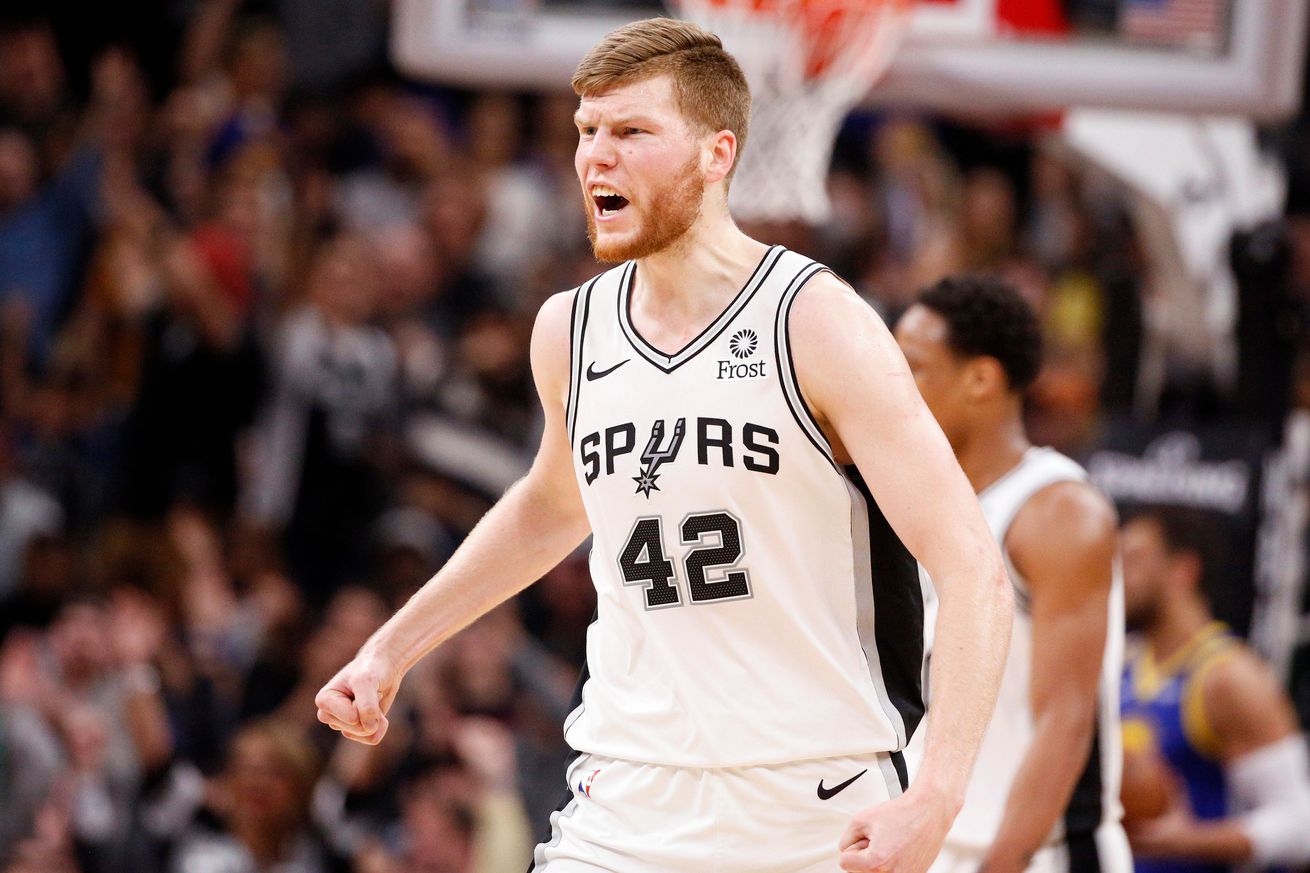 Defense and big-shot-making helped San Antonio hold on against the defending champs, 111-105.

Stephen Curry collects the ball with a few seconds left in the opening period and lets it fly from inside his own three-point line, setting it on its predestined arc towards the hoop some 60 feet away. In that time, the Warriors guard will have jogged all the way to half court, the buzzer has sounded, a bat in the rafters has slowed to a John Woo-like flap of its wings, and the well-conditioned observer has already accepted the most spectacular of outcomes. Watching the Warriors always involves a bit of fatalism, or faith, depending on which side you’re rooting for.

Curry’s basket leveled the score at 25 after one quarter, one of the many times the Warriors attempted to strike back in a game that they ultimately fell short. One reason why? The faith the Spurs have in their own personnel.

With Golden State eating away at San Antonio lead again late in the 4th, DeMar DeRozan drew a crowd as he dribbled into the defense and found Davis Bertans waiting on the wing, wide open. Bertans, who’d missed all 5 of his three-point attempts until that point, coolly buried his 6th, making it a 109-102 game with under 2 minutes to go.

“Davs can be oh-for-one-hundred,” said DeRozan afterward with a smile. “—and one-hundred-and-one is gonna go in, for sure.”

Bertans has emerged as one of the best shooters in the league, but his well-rounded contributions are what allow Gregg Popovich to keep him on the floor in crunch time, even when his shot isn’t falling. I asked the Spurs coach about it after the win:

“We always believe [Davis] is gonna make a shot. His defense has improved throughout the year. He’s learned to attack the closeouts and drive it a little bit — he scored a three-point play by hitting a shot at the baseline. He’s coming along.”

It’s the little things as much as the big shots that make Bertans the team’s plus-minus leader, both on the season (+3.7) and on Monday night (+10). Whether he’s drawing Kevin Durant away from the basket with his perpetual motion, or banging with bigger bodies like Kevon Looney, the Latvian forward’s impact on the floor is among the patchwork of intangibles that make this team work.

Curry’s buzzer-beating heave aside, it was San Antonio that ultimately came up with the big shots when they counted. Strong positioning and a hand in the face did little to alter shots by LaMarcus Aldridge (8 of 12 from the field) and DeRozan (9 of 17), the latter striking the final nail in the coffin off a baseline turnaround to beat the shot clock.

“[DeRozan] was great,” said Steve Kerr afterwards. “That shot he made over Klay at the end of the game pretty much wrapped it up, and Klay was all over him. He made a tremendous defensive play and DeMar just made a great shot.”

A win over the defending champs, even missing DeMarcus Cousins and Andre Iguodala, typically starts on the defensive end, and the Spurs sustained their level of play there for a 9th straight game, showing multiple bodies at ball-handlers, forcing the ball into Draymond Green’s unwilling hands, and scrambling desperately to close out on shooters like Klay Thompson and Curry, who shot a combined 4 for 22 in the first half. That performance was, unsurprisingly, a theme afterwards.

“Sometimes you gotta force the ball to swing, and force a guy like Draymond and kinda live with the result and play off that,” DeRozan said, noting the team’s pick-your-poison approach. “Everybody was conscious of that and tried to take advantage of it and keep playing.”

While Green finished 4 of 8 from the field (and 2 of 4 from deep), playing off him allowed Spurs defenders to constantly take away driving lanes from other players, and Green’s reluctance to immediately shoot meant that possessions often lost their zip once the ball worked its way around to him.

“We caught a lot of breaks,” said Derrick White of the Warriors’ missed looks. “But just team defense, knowing when to switch out, forcing them to tough shots — a lot of good things we did.”

Even if the Spurs won’t overstate the value of any individual win, the talent of their opponent wasn’t lost on anyone.

“They move and cut better than anybody in the world,” said Pop. “So it was a great classroom, so to speak, to try and guard that all night long. The effort was there for 48 minutes, and we learned a lot, hopefully. That’s a good thing.”

“It was a great test for us,” said DeRozan. “To go out there and show what we’re capable of when we’re playing consistent on both ends.”

Whether you deem Monday night a lesson or test, the Spurs won’t get any marks for what they do in March. Sitting at his locker afterward, LaMarcus Aldridge drew attention back to the team’s singular focus through one of his pet phrases: “It’s just winning time — I think everyone senses that, I think everyone’s trying to play better, we’re just trying to figure it out.”

While Pop retained his Poeltl-Aldridge backline to start the game, it’s worth noting that he turned to a smaller lineup down the stretch, finishing with Bertans and Gay at the forward spots. While Gay had a few defensive lapses and Bertans was not exactly a KD stopper, the decision worked out fine. It wouldn’t be surprising to see many games in the future follow a similar script.

The 34-year-old Aussie center made his Golden State return (and started) after stints in LA and, most recently, down under with the Australian league. In 19 minutes, Bogut had 7 points and 7 rebounds. Even with his hiatus, Bogut’s reputation may have preceded him, as it only took 9 seconds into his NBA return for him to pick up his first moving screen call.

Another big night from the big four

It took about two thirds of a season, but there is an increasing sense of hierarchy on this team. When it comes together alongside a strong defensive effort, San Antonio is tough to beat. On Monday, DeRozan and Aldridge paced the Spurs with a combined 49 points, but White and Gay also provided lifts doing what they do best: Gay (17 points, 6 rebounds) got buckets in isolation and off the catch, while White took turns guarding Curry, Thompson and Durant and still chipped in 12 points, 4 assists, 2 steals and a block.

Kerr with praise for the Spurs

“Sometimes they just don’t go in, but that wasn’t really the story of the game. I just felt like we got outplayed, you know. It’s the hottest team in the league. [They are] obviously really well coached, and they’re executing and I thought they out-executed us, out-coached us, and they deserved to win.”