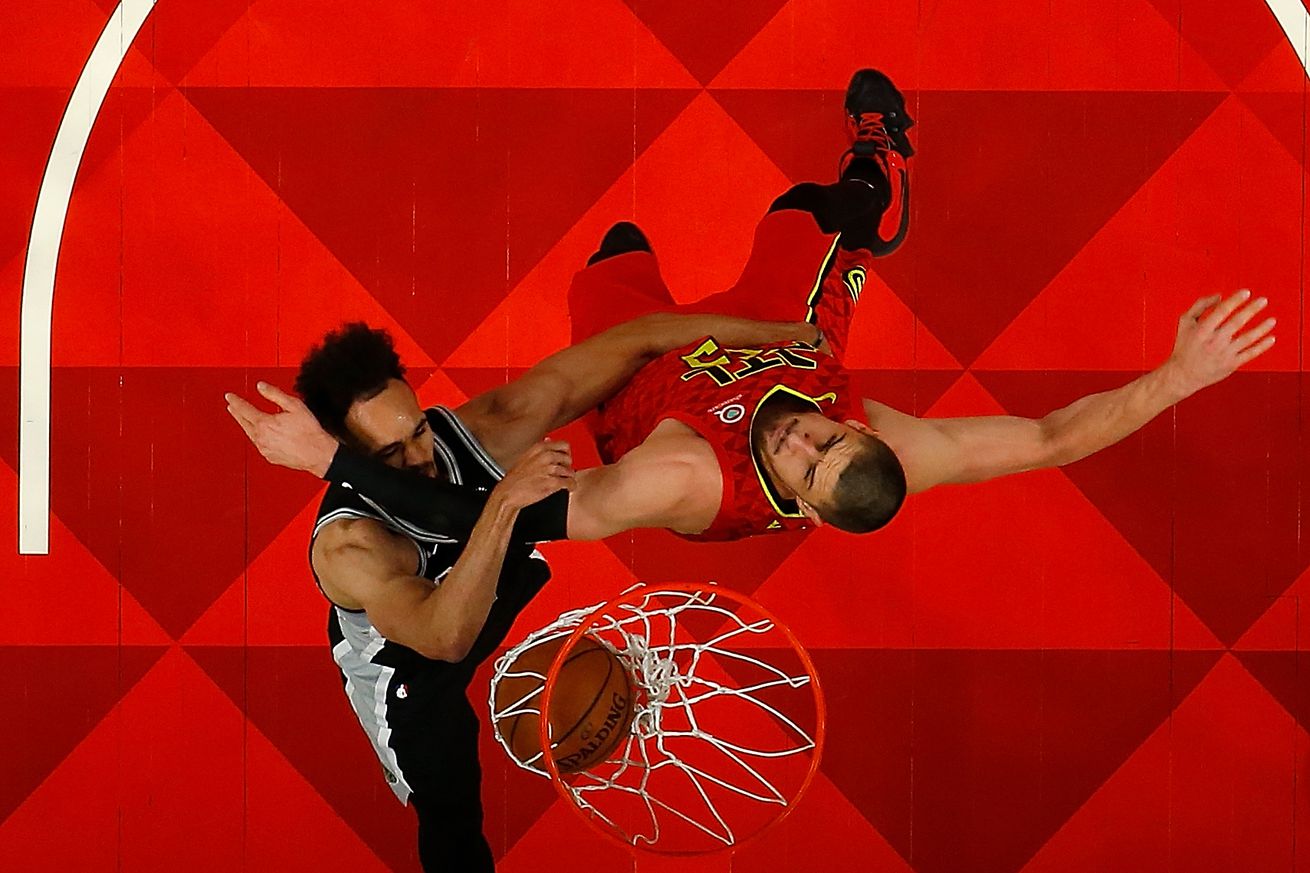 Strong performances from Derrick White and LaMarcus Aldridge put the Spurs over the top in Atlanta.

A road win is a road win, right?

Midway through the fourth quarter I had to pause the game and check the calendar. I was certain the San Antonio Spurs were in Las Vegas participating in the Summer League. I can’t really put into words how sloppy the majority of this game was. Derrick White and LaMarcus Aldridge came up huge down the stretch, allowing the Spurs to pull away late. The 111-104 victory tonight was their fourth win in a row, and the Spurs now find themselves tied with the Los Angels Clippers for 7th place in the Western Conference. More importantly (to me), the Spurs showed they can actually win a game on the road. The Spurs next game is on Sunday in San Antonio against the Milwaukee Bucks.

This was a strange game, but perhaps I should have seen it coming. Not sure if anybody else caught this, but midway through the first quarter DeMar DeRozan had a straight path to the basket for an easy layup on the left side of the glass. Instead, he took a weird angle and ended up driving towards the defender in the paint, which led to a double-clutched miss on the right side of the glass. Not sure if he was trying to draw contact or what, but it was strange. DeRozan could have stopped, waited for Boris Diaw to make him a cup of coffee on his espresso machine, and still made an uncontested layup on the left side of the glass.

The Spurs spent the majority of the first half looking like a team about to blow the game wide open, but they did not do a good job of closing out the first two quarters. The Hawks ended on a 6-0 run in the first quarter and a 15-3 run in the second. This lack of focus, execution, or some combination of both led to a 53-56 deficit heading into the second half. I don’t know about you, but my first thought at halftime was “here we go again.”

After a relatively quiet first half, LaMarcus Aldridge came alive. He scored 21 of his team-high 32 points in the second half. Much of the talk after tonight’s game will be over the play of Derrick White (and rightfully so), but Aldridge has been the one constant in what has been an extremely inconsistent 2019 for the Spurs. Aldridge ended the night with 32 points on only 16 shots, nine rebounds, and two blocks. One of those blocks was a rejection of Trae Young that sent the ball halfway across Atlanta.

I really wish Aldridge was three or four years younger, as he and White have excellent chemistry on the court and I would like to see them together for a long time. Even so, they could end up becoming a special duo for the Spurs over the next few years. Their pick-and-roll attack was giving the Hawks fits all evening.

If the third quarter was the Aldridge quarter, the fourth quarter belingee to White, who ended up with a stat line of 18 points on 11 shots, 6 rebounds, 9 assists (tied career high), and 6 blocks (career high). Beyond the numbers, his defense on Trae Young was excellent. Young finished the game with 22 points on 24 shots, but the majority of those 22 points did not come with White guarding him.

White has incredible control over his hands and arms, which leads to numerous wrap around steals and a high capacity for blocking shots. His six blocks tied him with Danny Green for the most blocks by a guard in franchise history. The Spurs are the worst defensive transition team in the NBA in terms of Points Per Possession, but it’s not White’s fault. He has a Green-like knack for keeping opponents from scoring in transition. They would have been fun to watch together, but I’m totally over all of that.

After the game Pop was asked about the play of Aldridge and White; he said:

All our players are important, but tonight Derrick and LA were special. They did a great job. LA has been doing it all year. While Derrick has been getting healthy, he’s been getting better and better. So those two guys obviously led the way for us.

When asked about what impressed him the most about White’s performance, Pop responded:

I mean he did everything well. His defense especially. He’s getting more aggressive scoring wise, but his defense is really solid. He blocked 5 or 6 shots and did a good job on a great young player [Trae Young].

Just ask Alex Len how he feels about White’s aggressiveness on offense.

I’m not a huge fan of arbitrary stats such as this, but I thought I heard Sean Elliott say during the broadcast the White is the only Spur outside of Tim Duncan who has finished with a stat line of 15/5/5/5 since 2003. That’s reasonably impressive company.

18 PTS | 9 AST | 6 REB | 6 BLK@Dwhite921 filled up the stat sheet tonight, tying the franchise record for blocks in a game by a guard with SIX. pic.twitter.com/iSls7vdoSd

Drew Eubanks may end up filling the final roster spot

Drew Eubanks has been backing up Aldridge the past two games, giving us some indication that the Spurs may be looking internally when deciding who will take Pau Gasol’s spot the rest of the season. I heard some hot takes immediately after a Drew Eubanks block against the Denver Nuggets that he already provides more than Pau Gasol was providing. Maybe it wasn’t such a hot take after all.

The effort from @DrewEubanks12 on both ends of the court pic.twitter.com/qSzDTdFV98

I’m only being partially serious, but when looking for a third big off the bench, the Spurs could do far worse than the activeness on the glass and around the paint that Eubanks has been providing. Eubanks ended up with five rebounds and one block in ten minutes.

Eubanks has only taken one three point attempt in the G-League this season, but before the Nuggets game, I saw him make five straight three-pointers from the corner. His form looks solid and he’s shooting 82% from the free throw line this season. It appears as though that’s something he could add to his arsenal as he progresses in his career.

Will the real “Red Mamba” please stand up?

Kevin Huerter apparently has the nickname of “Red Mamba.” I don’t know who gave him that name, or when (I found references dating back to 2016), but I think there’s a certain somebody in San Antonio who may take offense to such a name. Matt Bonner officially received this nickname on January 22, 2013 when Kobe Bryant made the following tweet:

.@DrinkGT @Scalabrine @nikebasketball The white mamba wasn’t in the building but the red mamba was…Matt Bonner

Sorry Kevin, but when the great Kobe Bryant gives somebody a nickname, you’re not allowed to take it. People have been sued for less. Bonner did briefly mention at halftime that Kevin’s not allowed to steal his name.

An aggressive Davis Bertans brings joy to my life

If Bonner is going to allow anybody to take over his nickname it’s going to be Davis Bertans. Bertans has been quiet the past five games, averaging only three points a game on two three-point attempts during this span. It was good to see Bertans aggressive in the second quarter, connecting on three of his five three-point attempts. He ended the game with 12 points on 4-10 shooting from distance. While six misses may seem like a lot, shooting 40% from three is more-than-acceptable. We need aggressive Bertans.

The future is bright in Atlanta

I have not had a chance to watch much of Trae Young since he joined the NBA, but I was surprised how slight he looked out there. His three point attempts was the thing most talked about leading up to the draft, but he has great touch on his floaters. He’s certainly not afraid to takes these shots, as I swear he took 10-12 of them in tonight’s game alone. I’d still prefer to have Luka Doncic, but if the Hawks end up getting another solid player with the additional first rounder they received from the Dallas Mavericks, the trade could end up working out for both teams.

This would have been a frustrating loss, but I really enjoyed watching this game. I love watching teams out of the playoff race playing hard. I loved watching 42 year old Vince Carter out there late in the game hitting shots, complaining about calls, and receiving technical fouls. That type of passion and leadership will only help their young core learn how to compete. The Hawks have played reasonably well the second half of the season and they have a promising future. None of this went unnoticed by Pop:

The Hawks are impressive. As I said before the game, they come and compete every single night. They’re establishing their culture. It’s a new program; new System. They’ve done a great job. The guys have bought in. They’re unselfish, they play hard, they’re physical, and they’re just going to get better and better.