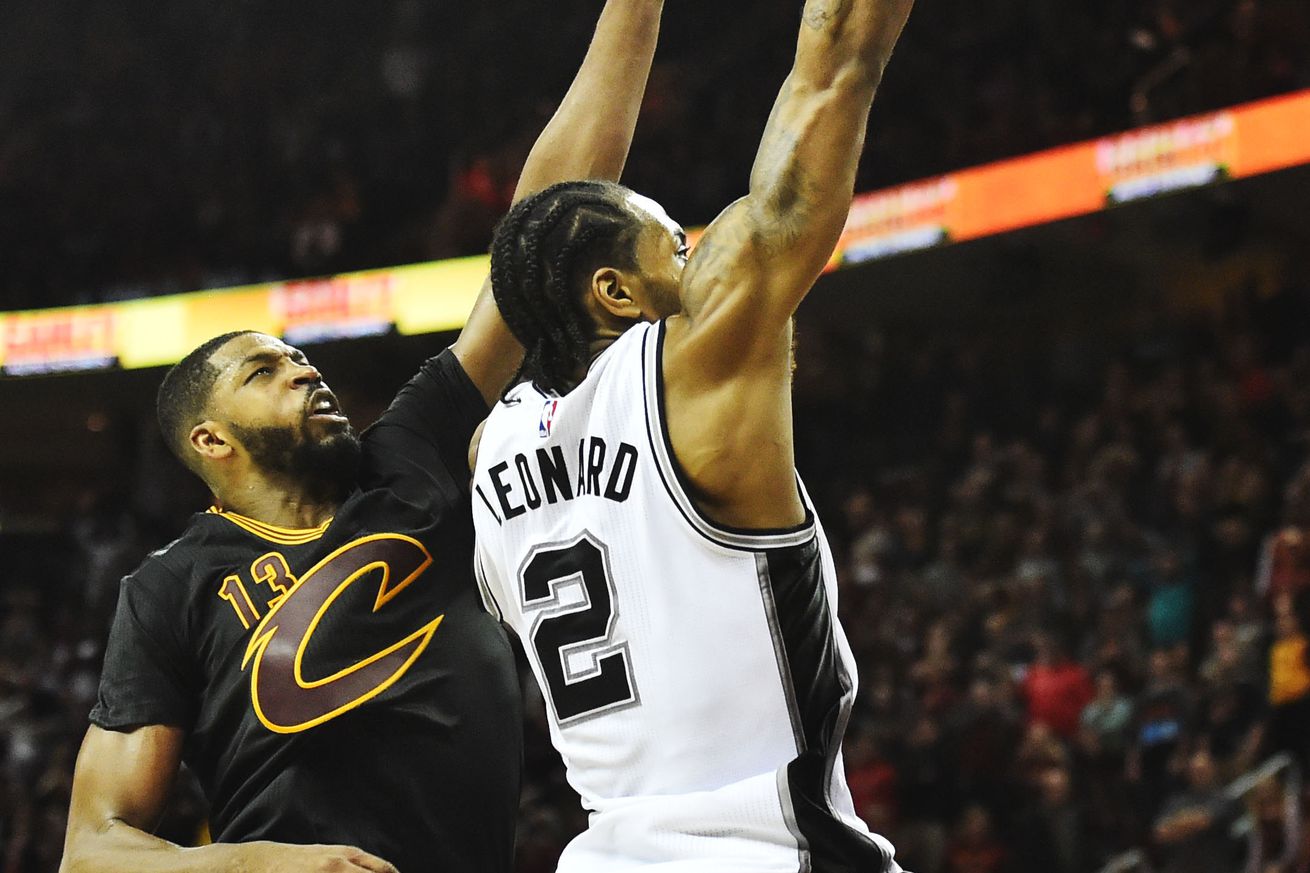 The Spurs have had a lot of duels against LeBron James over the years. They’ve won some, they’ve lost some —a few in heartbreaking fashion— but rarely have they been in the position to rally from behind in the fourth quarter against his teams. Sadly, the reverse has been true, where James has led memorable comebacks against them.

However, as we’ve seen repeatedly through the first half of the season, the 2016-17 Spurs give zero bothers about a bad half or even three quarters, much to the dismay of their skipper Gregg Popovich. They just refuse to fold or give in. It’s not the most talented squad they’ve ever had, not by a long shot, but it might just be the most resilient, and that makes for awfully entertaining games in what can be, at times, an interminable regular season.

Having Kawhi Leonard helps, of course. James raised eyebrows a week back when he declared that he and the Cavaliers had no rivals, and to be honest, I’m kind of on his side. It’s difficult for him to have an individual rivalry with the Golden State Warriors because there hasn’t been anyone on their roster for him to guard and who can check him on the other end. They’ve got Kevin Durant now, obviously, but he hasn’t faced off with Durant as a Warrior in the Finals yet and their personal history is rather one-sided in James’ favor.

A rivalry with Leonard would’ve made sense, had not the Warriors juggernaut came to be, but watching Saturday’s game I’ve never seen such closeness between the Spurs and James. It was practically a love-fest from beginning to end, with daps, hugs, jokes, words of encouragement and well wishes. It went beyond sportsmanship to practically kinship. The teams competed, they both no doubt wanted to win, but honestly it had the feel to me of a game from the 80’s, where both sides are running up and down, getting layups and open shots galore, and finally the defensive intensity rises in the fourth quarter.

What was billed as an epic match-up between Leonard and James proved to be that in box score only. For three quarters they were rarely in each other’s zip code, much less going mano-a-mano. Rather, for James, it was more like mano-a-Manu, and when he wasn’t abusing the 39-year-old Ginobili, he was primarily guarded by either Danny Green or Kyle Anderson. Leonard, meanwhile, was being checked by the likes of Iman Shumpert or Richard Jefferson. It brought to mind another Spurs win at Cleveland, in 2008, when Ginobili was at his peak. He scored 46 that night, and no matter how many shots he canned, James refused to guard him, preferring to chill on defense against Bruce Bowen while Ginobili torched Larry Hughes and Ira Newble.

The Spurs and Cavaliers aren’t rivals so much as they are brothers-in-arms, both all-too-aware of the dragon that’s waiting for them. The Warriors are the Death Star, the foreboding shadow looming over everything, and these veteran-laden teams know better than to try and kill each other in a January skirmish when the real battles will come in May. There’s only one sport where the games matter this time of year, and it’s not basketball.

At least, not for the first three quarters…

For a while, the game looked like it wasn’t going to be competitive or very fun. The Spurs trailed 33-22 after the first quarter and were fortunate it was close. Leonard and David Lee were the only live bodies at the outset, and they fed each other for slams on consecutive possessions, but the pick-and-roll coverage was terrible, Ginobili kept getting caught guarding James on switches after he checked in, and LeBron picked the Spurs apart. The Cavs had nine assists to no turnovers and were 3-of-6 from deep while the Spurs were 0-of-5.

It wouldn’t have been all that foolish to think the game over right then and there. After all, the Cavs had been 14-0 coming into the game when leading by double-digits after the opening period (and 26-0 when leading after three quarters, hahahaha), but out of nowhere the Spurs jumped on them in the second quarter with a 19-2 run, mostly from their reserves. Patty Mills hit a jumper, Ginobili got on the board with a transition three, Anderson had a block on one end and a fast (sort of) break layup on the other. After a Cavs bucket Mills was fouled on one shot and then hit a deeeeeep three. The Aussie fed LaMarcus Aldridge for a pick-and-pop J, and then Aldridge found Green in transition once more for a corner three. Finally Dejounte Murray got a floater over Kyrie Irving to fall in and just like that, the Spurs led 41-35.

While we’re here, let’s take a time out to discuss R.C. Buford’s latest draft heist. The Spurs general manager told us on draft night that the 20-year-old Murray had uncanny touch on floaters and he wasn’t kidding. Murray got four of them to drop in the first half, and his size and length was too much for Irving to deal with. He added a dazzling crossover and blow-by of Shumpert for a layup for good measure. Then in the second half he had a ridiculous banked-in floater and canned a step-back jumper.

Murray’s miles away from being a finished product, especially defensively, and his main strengths right now seem to be playing in the open court. But he’s already shown massive improvement from training camp and I liked his decision making in transition. The floaters were extreme degree-of-difficulty and sometimes they’ll go in and sometimes they won’t, but I was more impressed with the six assists to two turnovers.

Anyway, Irving taught the youngster some harsh lessons on the other end and then the Spurs lost new Cavalier Kyle Korver for back-to-back threes. They shot 14-of-17 in the second quarter, including 3-of-3 from downtown and 4-of-4 from the stripe, and had 10 assists, but Cleveland shot 61.1 percent themselves, with three bombs of their own, so it was “only” a 35-25 quarter for the visitors, and a 58-57 halftime lead for the hosts.

It was more of the same in the third quarter, the only real back-and-forth period of the game. Ginobili had consecutive baskets with a driving layup and a three, and somehow Leonard squeezed in nine points on the way to the quietest 23 points-through-three-quarters in all of creation, but again the Spurs were very un-Spurs-like defensively. The Cavs shot 11-of-15 in the quarter and the only reason they didn’t go completely nuts was because they turned it over six times, with the lengthy Anderson proving to be particularly vexing for them in San Antonio’s small-ball lineups that Pop employed liberally in light of Pau Gasol’s absence. Somehow, the Cavs were shooting 58.3 percent through three quarters and had made 11-of-19 threes, but were up just five, 89-84 going into the fourth. Luckily, they were paying homage to former Cavalier great Shaquille O’Neal at the free throw line.

The Spurs offense had been fairly democratic until then, but Leonard went full fascist in the fourth, and again San Antonio ignited, this time with a 19-5 run. Leonard hit a floater after another Anderson steal, then two freebies, then a wing three over the hapless Jefferson. Lee intervened with a layup, and then more carnage from Leonard with a straightaway three in Jefferson’s mug and a baseline floater. Aldridge —a terrific passer all night— found a cutting Lee for a baseline slam and then Leonard dished to Mills for a wing three. The Spurs led 103-94 midway through the fourth.

An Aldridge follow slam of a wide open Green miss from the corner made it 107-101 with 2:45 to go, and the Spurs were still up five with just a minute left, but Leonard was worn down and went cold late once James accepted the challenge to guard him. The game went to overtime after LeBron canned a shot he took from approximately Kentucky. To be honest, they were probably lucky the Cavs called time following a Leonard miss with 13 seconds remaining. Cleveland probably would’ve gotten a better look in transition than the one James settled for at the buzzer following the time out.

Leonard found a second wind in overtime and he and Irving traded buckets through the first half of the extra period before the Spurs finally caught a break. Mills missed a three so badly that it caromed wildly off the backboard (hmm, seems familiar, but I can’t put my finger on it), allowing Ginobili to pounce on it and feed Mills for another open look. This time, he nailed it, and from there the Spurs never trailed. Aldridge swished a 20-footer from the baseline to push the margin to three and then Leonard slammed home points 40 and 41 (a career-high) after Kevin Love tried to save a loose ball and threw it blindly right to Leonard’s gut. Love had a chance for redemption, but missed an open three from the corner at the buzzer.

Leonard’s now scored 30 for the sixth straight game, a feat that neither Tim Duncan nor David Robinson ever accomplished, never mind Ginobili or Parker. In fact, the last Spur to pull it off was Mike Mitchell, who was a prolific scorer in the mid-80’s. Mitchell, like Leonard was the 15th overall pick of his draft class and was a 6’7 small-forward, but to show you how times have changed since then, he was 0-of-3 in the six games combined from deep and San Antonio lost all six.

With all due respect to the late Mitchell, I’m pretty sure Leonard, when it’s all said and done, will go on to be the more celebrated player in the annals of Spurs lore. He’s 25, already a Finals MVP, and he’s just now getting the hang of this superduperstar thing.

Even if he’s not LeBron James’ rival.

The Nets hung an obscene 143 points at New Orleans the other day for their first win of the calendar year, but returned to form with a 112-105 loss at Charlotte Saturday night, with Brook Lopez leading the way with 24 points. The Nets have lost 12-of-13 and 17-of-19 and perhaps we can blame the Spurs for sending them down into the abyss, with a 130-101 browbeating at the AT&T Center on Dec. 10 during which Leonard scored a mere 30 points. It’s the front end of a back-to-back with the much tougher Toronto Raptors awaiting on Tuesday, so I’ll be absolutely shocked if Ginobili, who seemed to tweak his back late in the game, plays in this one. Heck, maybe even Leonard, who whacked his left hand on Jefferson and came out of the game briefly, might take a break here. I’m setting the over-under on Murray’s scoring total at 24.5 and taking the over.