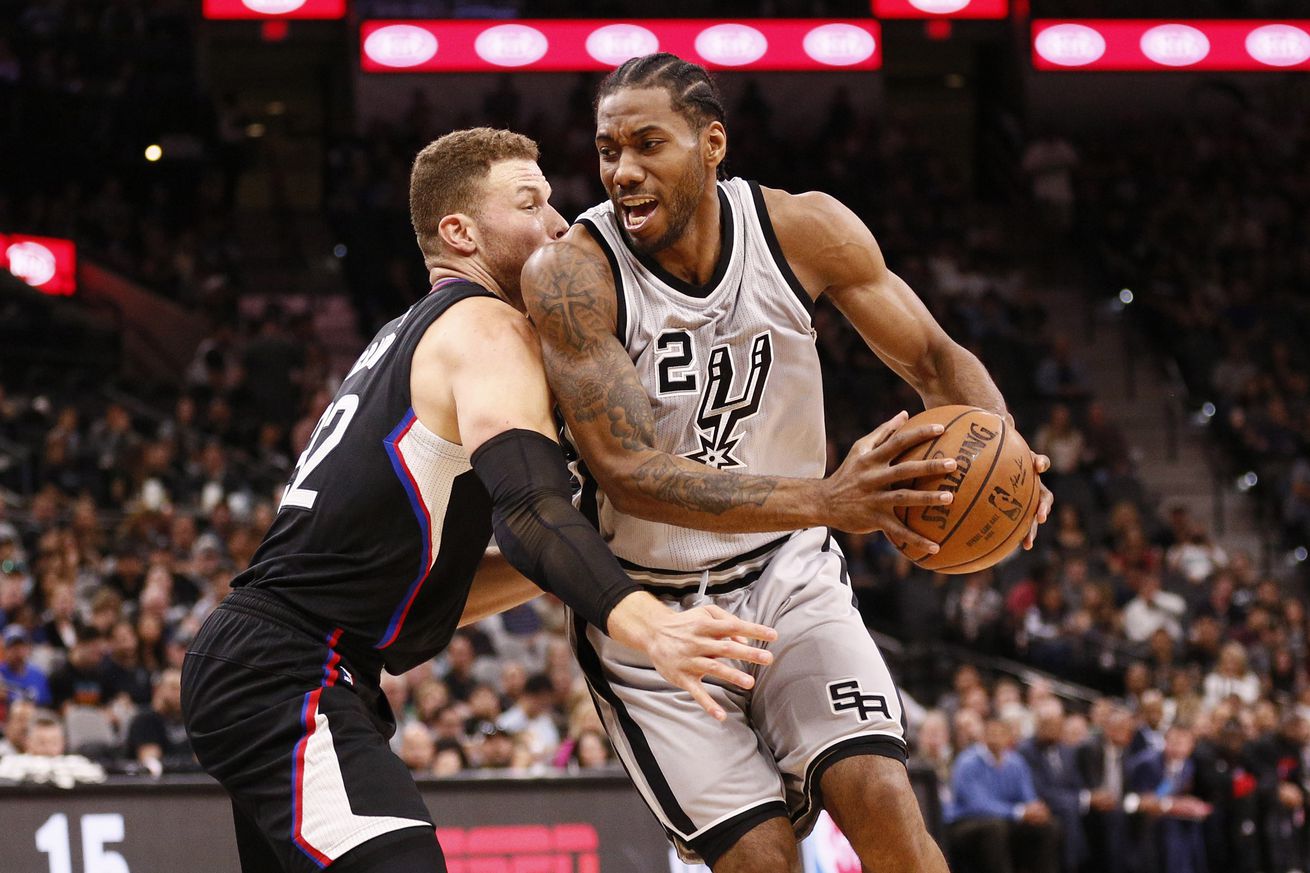 Welcome to Pounding the Rock’s first Spurs mailbag. You can tweet your questions for the next mailbag using the hashtags #AskPtR or #AskQ.

Let’s do this thing.

@poundingtherock What are the realistic chances of Kawhi stealing the MVP from Russ/Harden?

At this point, we are all familiar with Kawhi Leonard’s case for the Most Valuable Player award. He’s the best player on a 60-win team; he’s a destructive perimeter defender opposing teams avoid like the Black Death; he’s ridiculously efficient on every shot type; he’s made several big shots in big moments; he has dope cornrows.

His claim to the MVP throne is not what we are talking about, though. The thornier question is what, exactly, are Kawhi’s chances to steal the award away from Russell Westbrook, James Harden and LeBron James?

We could use Basketball Reference’s MVP award tracker — a statistical model which bakes in previous voting results and churns out a percentage — to create a baseline for Kawhi’s chances. The formula spits out six percent for Kawhi, sixth-highest in the league behind Harden, Kevin Durant, Westbrook, James and Curry.

That’s far too low. We can safely eliminate Durant (didn’t play enough games) from this discussion and Curry, who has a solid claim for the fifth spot.

Now, it’s certainly possible that Kawhi steals the MVP by virtue of second-place votes. He fits the traditional mold of a MVP candidate. He is who voters have been trained to reward based on historical context. Even if Westbrook or Harden garner more first-place votes, Kawhi could find himself with a sneaky-high number of second place votes, which could put him over the top if enough media members don’t gravitate towards Westbrook or Harden.

For that reason, I put Kawhi’s chances of winning MVP at 15-20 percent.

@poundingtherock Do you think if Kawhi loses MVP, should he be the front runner for Most Improved?

Kawhi improved his scoring average for a sixth consecutive season, along with increases in assists (3.5), 3-pointers (2.0), Player Efficiency Rating (27.7) and usage rate (31.2).

He’s been markedly better than last year, when he finished second in MVP voting. But he shouldn’t be a frontrunner for the Most Improved Player award. Giannis Antetokounmpo has improved more. So has Nikola Jokic. And Isaiah Thomas. James Johnson is garnering serious consideration for the award, too.

MIP always has a long list of candidates fitting the bill. Kawhi won’t win, even though he’s managed to make another leap in his game.

@quixem Do you think Dewayne Dedmon’s playoff inexperience will play a major role at some point in the playoffs, much like Boban’s last year vs okc?

No, I don’t think Dewayne Dedmon’s playoff inexperience should affect him. He’s a different type of player than Boban Marjanovic (obviously).

Marjanovic, as good as he was last season, remained a gadget player Gregg Popovich deployed in low-leverage regular season games. He wasn’t fit for the rigors of postseason play, because opposing teams could roast him in pick-and-rolls over and over again. Dedmon does not have that weakness. He’ll be valuable in any playoff series.

@poundingtherock What kind of price do you think Dedmon will command after this season? And will the Spurs pay it?

Those big men aren’t too good at basketball; Dedmon, a big men with a pliable skill set, is actually very good. Plus, another hike in the salary cap this offseason will increase player salaries in an already inflated big man market.

So Dedmon is gonna get paid. He should expect at least $15 million per season, given the precedent set by the NBA. Anything less would be pennies on the dollar.

@poundingtherock what will be the bigs rotation and how many minutes will each rotation play? will Dedmon, Bertans see minutes?

Just a rough guesstimation of the Spurs frontcourt rotation in the playoffs: Aldridge (33 minutes), Dedmon (23 minutes), Gasol (23 minutes), Lee (17 minutes). I have no idea about Davis Bertans’ playoff usage, nor do I even want to venture a guess. Anything is in play with Pop.

At first, Aldridge popped into my head. He’s from Texas, played college basketball at the University of Texas and now he plays professional basketball for the Spurs. Texas eating establishments are quite good at making tacos. With years of taco experience, he’s the logical frontrunner.

Second point: Anderson runs really slow compared to his NBA peers. Perhaps it’s because he chows down on al pastor tacos during his off time?

@quixem @poundingtherock If the NBA draft were today, who would be the ideal pick/best fit for the team?

This is a question better suited for Spurs draft connoisseur Trevor Zickgraf, but I’ll take a stab anyway.

From my extensive experience watching college basketball the one college basketball game I watched this season, I really liked Gonzaga’s Nigel Williams-Goss. He averaged 16.8 points, 6.0 rebounds, 4.7 assists, 1.7 steals and 1.1 3-pointers per game on a team that lost just two games all season. He even made a Tim Duncan-esque bank shot in the national championship game, so he’s pretty much a lock for the Hall of Fame.

@quixem who is your favorite current Spurs bench player not named Manu? And why? #AskQ

Say what you want about the man, but Tony Parker is still an important player for this postseason run. He’ll need to sustain positive production for the Spurs when he’s paired against the elite point guards in the league. Which is basically every team in the Western Conference.

It’s not Dejounte Murray’s time yet. But it might be soon.

@poundingtherock how many minutes a game should play Manu and Tony in order to remain efficient through the playoffs?

Let’s go with 20 minutes per game — 25 max. Anything more figures to stretch their old-man bodies to the physical brink. Anything less feels like they are being under utilized.

@quixem @poundingtherock Among the number of free agent PGs this summer, who’d you want the Spurs to go after?

It’s safe to cross Curry, Paul and Lowry off the Spurs point guard wish list. That leaves Holiday, Hill, Teague and Rose (yuck) if the Spurs want to nab a starter-level point guard in free agency.

My personal favorite among the crop is Hill, a 32-year-old point guard with past Spurs experience and a well-rounded game. It’s worth noting, though, that Tony Parker is still on the books for $15.5 million next year. Unless he retires (unlikely) and Mills walks too, San Antonio won’t have enough cap resources or the willingness to dive into the point guard free agent pool.

Q: Would you sacrifice eating Whataburger again if it meant getting a young Tim Duncan back? — Alfred Herrera

Absolutely yes. 100 percent without hesitation. And if you didn’t think I was serious enough, I’d even give up Whataburger for the rest of my life AND willingly eat at Burger King five times a week if we could get another 20 years of young Tim Duncan.

I’d take one for the team. You’re welcome, Spurs fans.