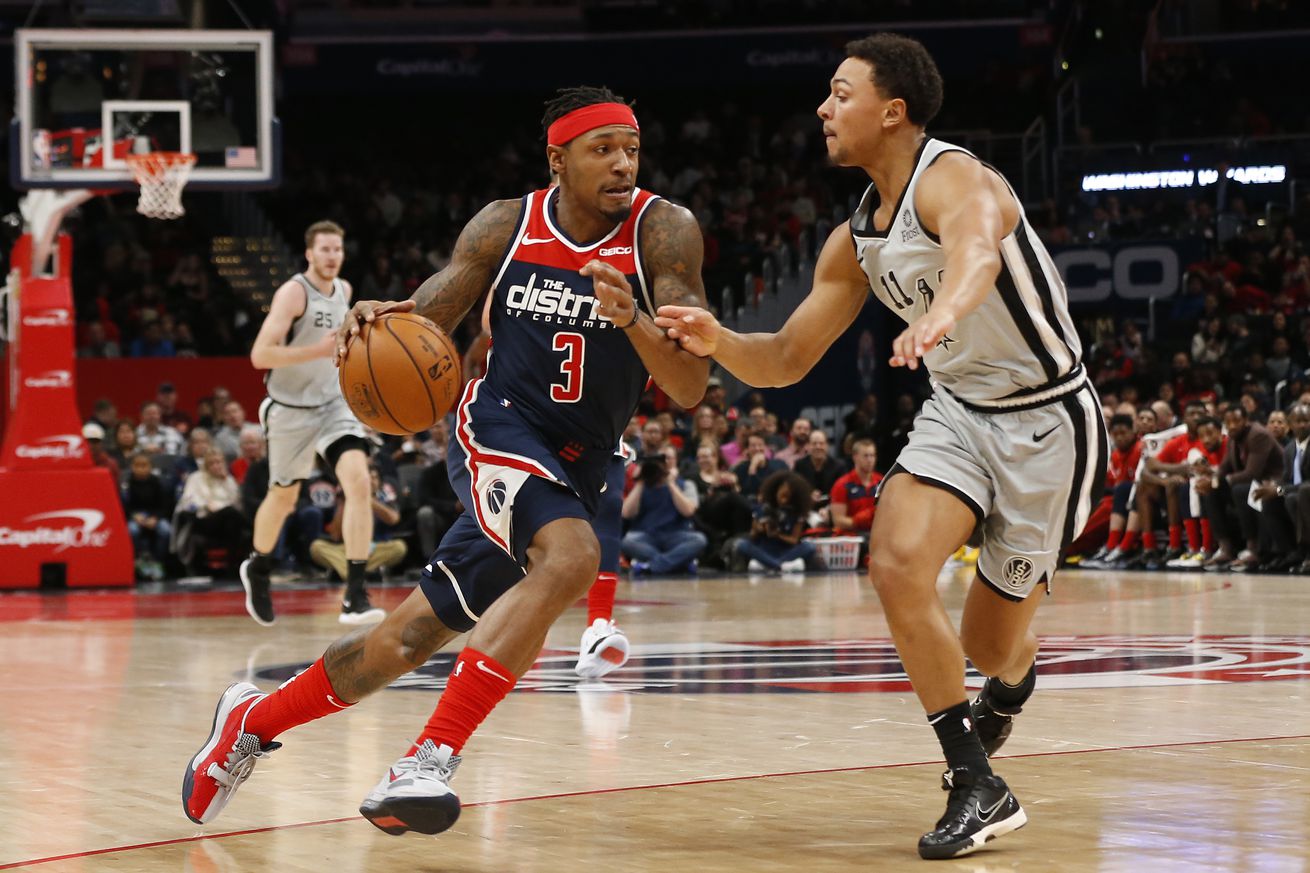 The Wizards prevailed in a battle of terrible defenses and potent offenses to sink the Spurs further in the standings.

The tailspin continues. Despite scoring 132 points the Spurs allowed 138 and lost their seventh straight, this time against the lowly Wizards in Washington. San Antonio is now five games below .500 and firmly out of the playoff race (although it’s still early).

The combined 270 points might feel like too many, but this one was always going to be a high scoring game. Both the Wizards and Spurs came into their matchup boasting top five offenses and bottom five defenses, so Gregg Popovich decided to try to fight fire with fire and started Patty Mills in hopes of outgunning Washington. Unfortunately it didn’t work, like everything else San Antonio has tried this season.

The Spurs did start the game well, something they’ve rarely done this season, with Mills and Jakob Poeltl on the court at tip-off. The Mills-Bryn Forbes perimeter duo hit some outside shots and provided DeMar DeRozan with more spacing to attack, while Poelt and LaMarcus Aldridge prevented the Wizards’ starters from going off early. San Antonio led by double digits in the first quarter before Washington’s subs cut the deficit, and again in the second quarter. Neither team could really stop the other at all, but with Bradley Beal struggling in the first half it looked like the Spurs were actually going to shoot their way to a win. All they needed to do to snap their losing streak was keep their focus, prevent their opponent from gaining momentum, and get Aldridge involved on offense. What happened next was painfully predictable.

Beal heated up in the third quarter against a helpless San Antonio perimeter, shooting Washington back into the lead right as the Spurs’ abhorrent transition defense started to give the opposing role players easy buckets. The Wizards bigs drew the Spurs’ centers out of the paint or rained threes when they failed to come out to the perimeter. The offense went dry at the wrong time, with Aldridge, who is supposed to be the stabilizing presence inside, nowhere to be found. The Wizards went on a 12-0 run to get the lead midway through the frame, then relied on their star guard to hold off the Spurs’ push.

By the start of the fourth quarter the game was even more chaotic that it had been earlier, with both teams running and gunning. DeRozan and an energetic Dejounte Murray tried to keep the offense afloat as the Spurs waited for the Wizards to give them a chance to catch up, but by then Washington was rolling. The inevitable failed comeback attempt came late but fell short, because that’s what happens to the 2019/20 Spurs.

There really are no positive takeaways from this loss, other than it was refreshing to see Pop try something new, even if it didn’t result in a win. The Spurs are bad right now, and nothing should be off the table. The coaching staff needs to find a rotation that works or the team’s playoff chances will vanish quickly.

The adjustments made to face the Wizards didn’t work. It’s time to keep experimenting until something does.

Next game: @76ers on Friday

The 76ers’ offense is a mess right now, but the Spurs defense is so bad that it’s hard to be confident about the losing streak ending against them. Let’s root for the upset anyway, since it’s all we can do right now.