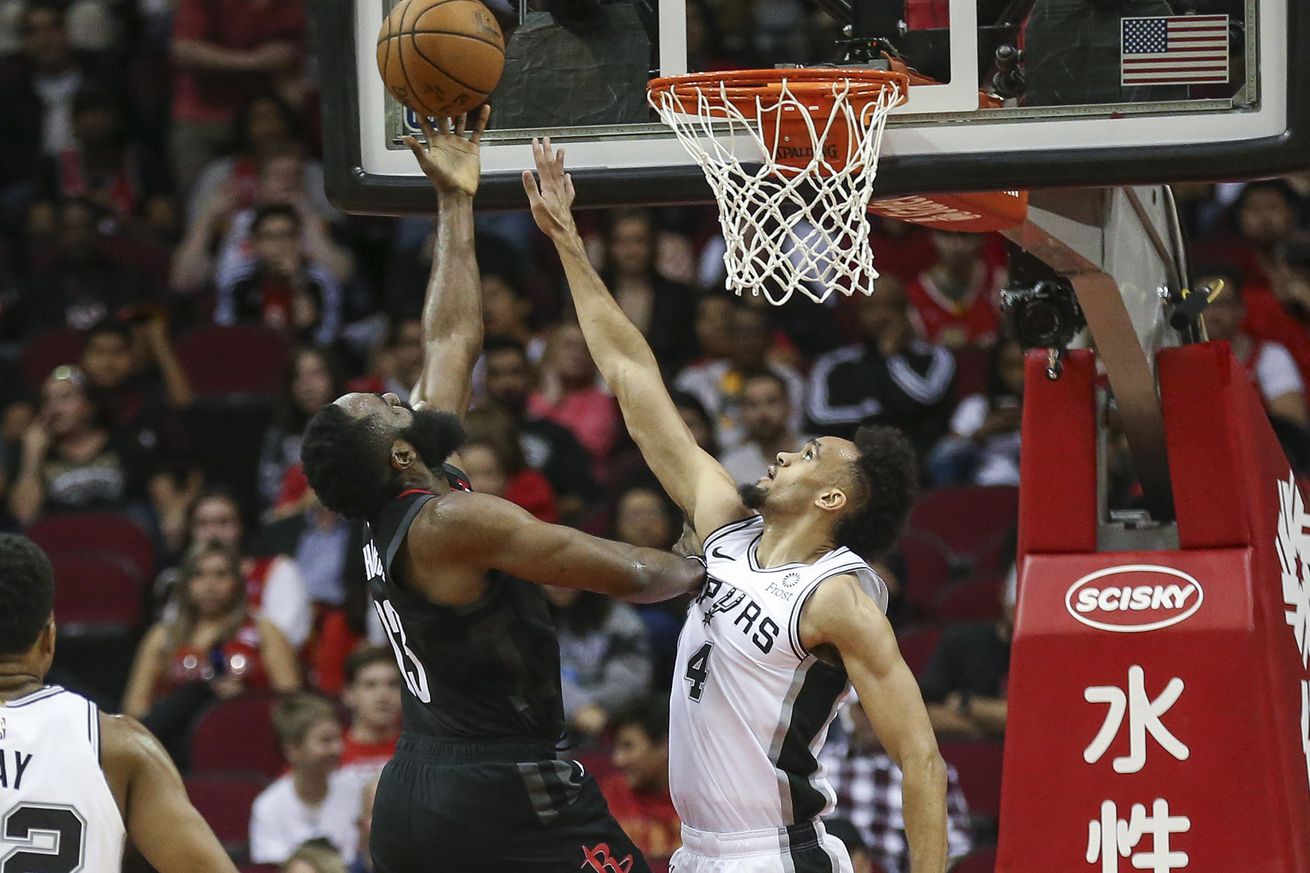 Couldn’t clean glass to save their lives.

The Rockets dominated the Spurs on the glass on Saturday night. Whether it was the road SEGABABA or the 24 games in 42 days without consecutive nights off, the Spurs appeared to lack the energy to fight the Rockets off the boards, giving up 26 second chance points off 20 offensive rebounds in a game they only lost by 7.

If you’ve the stomach for such masochism, you can watch them all here.

There’s a lot of Clint Capela out-jumping and out-reaching everybody for the ball. There are also a few fouls committed as Rockets players crash into Spurs going for the rebound but that’s pretty common in a scrum. More troubling are the uncontested offensive rebounds the Spurs gave up.

Watch P.J. Tucker and Nene on these plays.

Per NBA.com, the Spurs only had 11 box outs on defense in this game. They average 24.2, and had 30 and 41 in their two previous games against the Rockets, so it’s not a matchup issue. It’s also not a matter of fewer opportunities, as the Rockets missed 58 shots in this game after missing 49 and 60 in their last two contests with the Spurs.

The most likely explanation is energy and effort, and the Spurs just didn’t have enough of either in this game. That they were still so close to stealing a win with that kind of performance is impressive in it’s own right.

Derrick White deserves a lot of credit for keeping the team so close. He only scored 5 points, but added 5 rebounds, 5 assists, 3 blocks, a steal, and some of the best defense on James Harden you can find. The Rockets’ superstar went for 39 points, but he had to use up a ton of possessions to get there. With 34 shots, 4 shooting fouls drawn and 3 turnovers, it took Harden 41 possessions to get his.

Of course, he also had 10 assists and the Rockets rebounded 9 of his 22 misses, so it isn’t like White dominated one of the best offensive players on the planet, but he made him work for it the entire game.

White did an excellent job of moving his feet and staying in front of Harden, and rarely risked catching cheap fouls by reaching.

After taking the contact to his chest, Derrick watches as the ball bounces out of the basket, but then strips the ball from Harden on his way up for a block.

Harden tries to go around Derrick instead of through him this time, but Derrick swipes the ball away off Capela and out of bounds for a turnover.

Harden is able to get to his left and into the paint on Derrick this time and creates just enough space to finish over Derrick’s outstretched hands on the opposite side of the rim. Harden’s ability to create space is world-class.

He plants a brief forearm into White’s chest to maintain space as he goes by initially, then swats White’s right hand up and away from him while still maintaining perfect body control as he transitions into his gather and goes up for the contested layup.

Here’s another case of Harden using his off arm to maintain space.

In case you missed it, Harden actually whiffs on his first attempt to ward Derrick off and has to hit him again to establish enough room to get his shot off. Derrick maintains perfect position the whole way through and does an excellent job of keeping his arms straight up.

Derrick also defended Harden’s stepbacks as well as can be expected, though he made a critical mistake at the end of the game interfering with Harden’s landing space.

Of course, the only play most people are going to remember happened with just over 6 minutes to go in the game.

Derrick very clearly beats him to the spot, and Harden very clearly uses his off arm and shoulder to create space. That this level of contact somehow doesn’t meet the threshold for a whistle is problematic in and of itself, but coming as it did near the end of a night where the Spurs felt the refs had missed a couple of obvious calls on the other side of the ball, it felt especially egregious. Derrick’s sitting protest as the play finishes up with a Capela dunk makes it very clear what he thinks of the no-call.

But the Spurs didn’t lose this game because of a few missed calls, and there’s no reason to dwell on plays like this. This is Harden’s game and he’s probably the best the NBA’s ever seen at creating space without drawing a whistle. Derrick did a fantastic job of guarding him all night, and should the team’s rebounding show up in their fourth and final showdown in March, the Spurs will likely have little trouble knotting the season series.