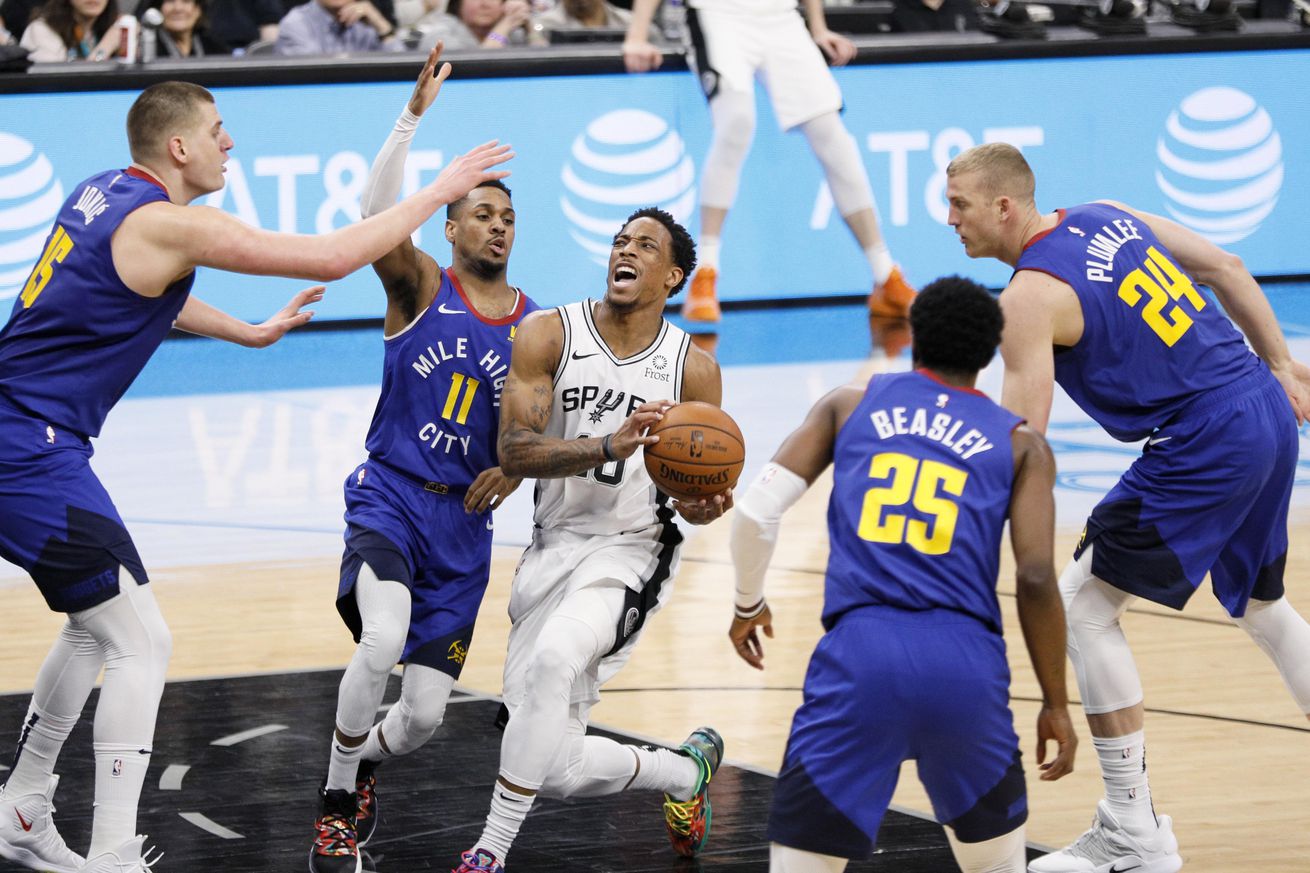 With a chance to seize a 3-1 edge, the Spurs’ defense and focus failed them against a locked-in Nuggets team.

DeMar DeRozan bore down the middle of the court and feinted right, then spun left, making contact with Malik Beasley before — in the same fluid motion — turning back towards referee Scott Foster, standing near the sidelines at halfcourt, and launching the basketball at him. The play had been whistled dead: offensive foul on the Spurs guard.

DeRozan’s toss, like many of the Spurs’ long-range heaves on Saturday, missed the mark. No matter, though: the gesture was enough, expressing the player’s stark disapproval with the way things were going and, in the process, earning him an early exit from Game 4. The outburst didn’t doom San Antonio — who was already down, 110-92, with 5 minutes left and showing no signs of turning things around — but it was at least symbolic of a 117-103 loss characterized by a distinct lack of composure and focus.

There were other sequences, of course. Losing 69-65 and coming out of a timeout, the Spurs were unable to inbound the ball and hit with a 5-second violation. Going back the other way, they allowed Paul Millsap to rebound his own three-point miss, which bounced back to him just inside the arc and, on the same extended possession, fouled Nikola Jokic on a three-point shot.

“I thought the Nuggets played harder and smarter than we did,” said Gregg Popovich. The Spurs coach, who typically errs towards the abstrct in his post-game talks, defaulted to coach-isms on Saturday — “competing,” “physicality,” “wanting the game more,” etc. — and side-stepped questions about the 5-second violation in the 3rd quarter and his star’s ejection in the 4th.

DeRozan who’d tallied 19 points, 5 assists and 5 rebounds before getting tossed, did speak on his final play: “Frustration. I thought it was a bad call. Combination of both.”

The frustration had likely burbled as the game went on. After pulling away 34-22 in the 1st, the Spurs were outscored, 95-69, in the next three, failing to make a single jumper until garbage time. Overall they made just 5 of 17 three-pointers and, on the other end of the floor, struggled to contain penetration and was late closing out on Denver shooters. The Nuggets shot the three ball confidently, benefiting from the hot hands of Torrey Craig (who matched the Spurs’ three-point total by himself by going 5 of 7), Will Barton (3 of 3), and Jamal Murray (3 of 5).

While Murray and Barton both had impressive bounce-backs — the former having been dominated by Derrick White in Game 3 and the latter being demoted to the bench for his struggles — it was Craig (18 points, 8 rebounds, 2 steals, 1 block) that served as the real revelation for Denver. The versatile wing was inserted into the starting lineup in place of Barton, and rewarded his coach’s decision by not only hitting his shots but by playing strong individual and off-ball defense.

“I think this is a great education for him,” said Pop of White. “Last game and this game. He was a completely different player tonight, at both ends of the court. He’s a young, dedicated guy who’s gonna keep learning and in a way this is a great experience for him, because every young player has to go through it. And he felt it, at both ends.”

It’s hard to say what’s more costly for San Antonio: the lack of composure or a quiet night for their budding guard, who’s quickly shot up the ranks of the team’s most important players. They’ll need both as the series swings back to Denver, where the Spurs will have to win one more if they’re to advance.

Denver had lost 14 straight in the Alamo City, a streak that dated back to 2012, before Saturday’s win, something Mike Malone was sure to note in his post-game presser. Like many factoids surrounding his team — Malone reminded reporters on Thursday that these Nuggets are the 8th youngest playoff team in NBA history — the coach went into the game’s historical relevance and how important it was that his players lacked that same reverence:

“I saw a young team that wasn’t thinking about 2012,” he said. “If you think about the last 7 years, it’s gonna overwhelm you. We’re living in the present, we’re living today — Game number 4. That’s all we’re worried about.”

The Serbian center had another big game, rumbling to the rim and following misses while setting up teammates with dribble handoffs and passes to cutters. He had 29, 12 and 8, along with a game-high +17.

Pop on those 5 playoff minutes for Donatas Motiejunas

Pop dug deep into his rotation at the end of the 3rd quarter, giving some unexpected run to the late-season acquisition. While Motiejunas doesn’t project to be an X-factor in this series moving forward, the coach did answer a question about him, so here’s his response:

“He’s a good basketball player. He’s a Lithuanian — it’s kinda like these other countries who seem to find big, long guys who understand how to play. He’s a smart basketball player who’s been playing a long time. He’s been well-coached over the years no matter where he’s played. He just came out and played. He doesn’t know what we’re doing — just the basic NBA kind of stuff he can do, and that’s what we did while he was out there. And he was fine.”

Losing aside, this is pretty neat.

Today marks our 200th playoff game in San Antonio, becoming one of four teams in NBA history to have 200 home postseason games.

Thank you Spurs Family for being here for every single one of them!@Budweiser | #GoSpursGo pic.twitter.com/HlFKSAT89O

Spurs lose their cool and homecourt advantage in Game 4 loss to Nuggets
Source: Pounding The Rock