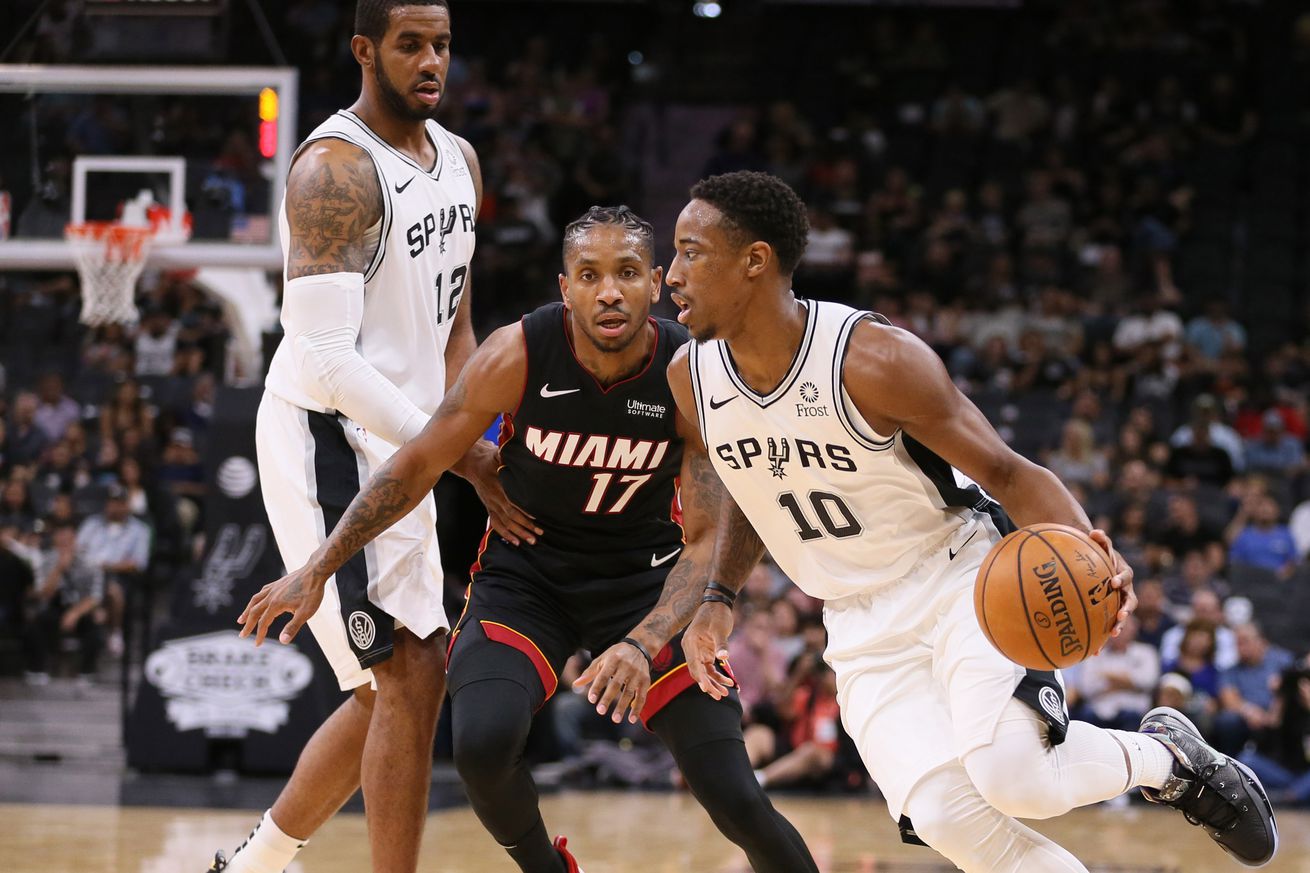 Led by strong performances from Rudy Gay and Derrick White, the Spurs held on in their preseason opener, 104-100.

In the same way that you take in an orchestra warming up, with its dozens of non-melodies gradually overlapping one another, what preseason basketball lacks in stakes it makes up for in the unchecked anticipation of what might be. The on-court result is its own wall of sound — far from harmonious, but intriguing in how it can tease what may or may not form in the months ahead.

It’s a welcome recalibration from last season in San Antonio, when an ominous announcement at the start of preseason last year ultimately set the 2017-18 Spurs on their unforeseen contingency course. Sunday’s game versus the Heat had the comfortable feeling of business as usual, even with the many new faces in town and the familiar ones now having moved on.

The afternoon began with the kind of levity you’d expect from Gregg Popovich. When asked a couple of hours before the game who his starting five would be, his response was playfully, typically deadpan:

“I got some idea, because I know what players are on my team.”

He ultimately went with Pau Gasol, LaMarcus Aldridge, Dejounte Murray and Rudy Gay, joined by new arrival DeMar DeRozan — a group he was quick to note after the game was far from set in stone moving forward.

Gay was excellent in the preseason opener, making the most of his start by going 5 for 6 from the field for a team-high 13 points, his only miss coming on what would have been a thunderous tomahawk dunk that careened off the back of the rim and sailed some 60 feet into the Spurs’ backcourt. Nevertheless, the 32-year-old looked confident as he pulled up from three (he made all 3 attempts) and attacked the Heat defense. He commented about the longer leash he feels he has in year number two in Pop’s system and mentioned the benefit of coming into training camp fully healthy.

DeRozan was largely deferential in his first outing as a Spur, dedicating more time to finding a rhythm within the offense and getting a feel for his new teammates. He hit 3 of his 6 shot attempts, and finished with 7 points, 2 rebounds, and 2 assists, looking to find some early rhythm in the pick and roll with Aldridge (10 points, 4 rebounds). “It’s gonna come along,” he said about finding his place on the team. “I’m not worried about that at all… It’s gonna get easier.”

Pop shared a similar lack of concern for his newly acquired star:

“It’s pretty much a given that team-oriented players, when they get into situations like DeMar’s in now, he’s gonna probably pick and choose a little bit, he’s gonna take his time, get the lay of the land, figure out his teammates. In that respect, I thought he was great… it was a great first outing for him.”

It’s not likely a coincidence that DeRozan’s locker is next to Rudy Gay’s, a former teammate and one of the players he first spoke to after hearing word that he was being moved from Toronto. The two traded friendly barbs in the locker room after the game, and that chemistry should translate to both players’ performances on the floor this season.

DeRozan’s fellow former Raptor Jakob Poeltl (6 points, 10 rebounds) also showed flashes of the kind of players the team traded for, putting in a consistent effort in running the floor and competing on the glass. The Austrian seven-footer spent most of his time spaced out with four shooters — most often some combination of Patty Mills, Derrick White, Bryn Forbes, Davis Bertans, and Marco Belinelli. Pop’s post-game comments again asserted the uncertainty about rotations and their intent on simply seeing what works:

“We just threw it out there. We just wanted to have different people in different positions… see how it came together.”

A pair of former first-rounders, Dejounte Murray and White, both showed developments in their game, Murray with a pull-up jumper that looks far more fluid than last season and White playing with considerable poise as the ball-handler for the second unit. Both gave cause to be optimistic about where their games could be headed.

Pop had some positive words for White, who finished with 12 points and 5 rebounds on the day:

“I felt good,” said White. “The first half was kind of rough. I was too excited or something. The second half I felt comfortable.”

Every rostered player saw the floor save for one — rookie Lonnie Walker, who was reportedly still experiencing a bit of soreness and held out as a precautionary measure. In a particularly restless moment in the fourth quarter, the AT&T Center crowd erupted into cheers of “We want Walker,” a chorus that carried on irregardless of the action on the floor. (Such is preseason.)

Even if the crowd’s cries for a distinctly styled Spur to take the floor rang comically close to home, Sunday’s win still served as a positive step away from the chaos of last season and towards a new unknown. We still have plenty of questions about this team, but we should get the answers this time.

Other notes and quotes:

“I think some things will probably develop in the locker room. Last year, LA was fantastic just in realizing his position on the team. Manu was a great help to him because he watched Manu in the locker room, in timeouts, that sort of thing, how he conducted himself. So LA made a huge step last year in that regard. And Patty Mills has been kind of part of our spirit for a while now, to where he doesn’t just energize our team, he gives them a direction and a goal and standard in the way he plays everyday. He and LA were doing a great job last year. I think that’ll continue but it’ll be interesting to see who else in that regard will step up.”

Pop on his expectations for Dejounte this season

“I don’t expect him to take over the leadership at this stage. What we expect him to do is really understand what his job is and become kind of like the favorite player on the court, so everybody wants to play with him. Score some, distribute, play D, gain the respect of everybody. And at that point, we can worry about leadership as far as taking hold of the whole team. As a point guard, he’s learning a lot.”

“These can be big culture years for organizations, when there’s a lot of change. Change is always inevitable for franchises like San Antonio and us. It happens less with both organizations. Eventually it does happen, and you lean on your culture… you lean on the consistency of whatever your values are. They’re gonna be just fine. Pop and RC have built something that’s extremely strong at the base.. It can weather changes. It doesn’t mean there won’t be adjustments, but they were already going through that last year. The last year in my mind was one of the more remarkable seasons they’ve had, missing players and still able to have the success they had. It just shows how strong the culture is.”

A strong showing for Davis Bertans

Bertans did what people expected from deep, going 3 of 5 on threes, but added five rebounds and two impressive blocks at the rim. It’s a rare combination of strengths that should be on display more than ever this season.