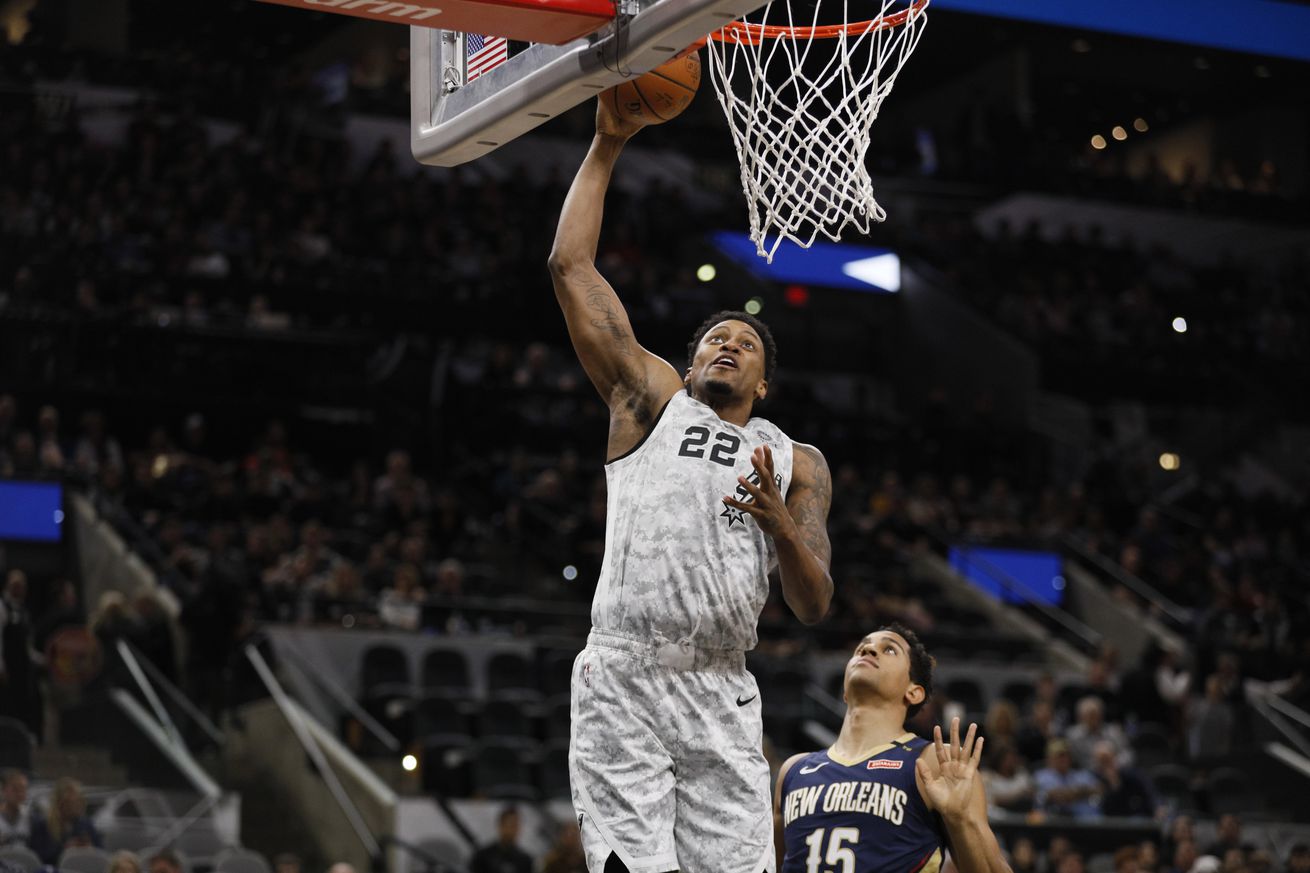 The Spurs eventually took care of business at home, picking up a fifth straight win and improving to 32-22 overall after beating a feisty, short-handed New Orleans team.

The Spurs’ lead slowly wilted on Saturday, from 22 with 7 minutes to go in the fourth quarter, to 15 at the 4:19 mark, to 10 with under 3 minutes left, to 5 with 45 seconds still left on the clock — and all the while Gregg Popovich let it play out. Against a Pelicans team missing five of its six top players, and with the only healthy member sitting on the bench, the Spurs coach let his group of reserves try to figure things out — still calling plays, certainly, talking to players, and making the occasional substitution as needed — but looking to avoid the final measure of sending his starters back on the floor. Until he had no choice but to.

The coaching decisions that define a basketball game are rarely so obvious to us watching as the one that played out in the final quarter of the Spurs’ 113-108 win over the Pelicans. Pop’s move, just like a thousand other little things he will do (or won’t) during the game, was an attempt to foster growth on the intangible level. In a scrum that felt notably different from his incensed Suns monologue, he spoke about the smaller game that sometimes occurs within the greater one:

“[I was] just trying to give the confidence to those guys when they’re out there and, you know, if they make a mistake and the lead goes away a little bit and you pull them and that can be a really a negative for those guys. I won’t say I wasn’t nervous doing it. I just decided to stick with them and let them sink or swim for a little while, but when it got to three obviously I had to do something different.”

If you had to grade the reserves’ effort as ‘sink’ or ‘swim,’ well, let’s just say it’s a good thing that Tim Frazier’s three-point attempt, which could’ve knotted the game at 111 with 4.4 seconds left, swirled in and out. Rudy Gay, subbed in along with DeMar DeRozan and LaMarcus Aldridge to try and secure the win, gave a good contest on Frazier’s jumper, while Aldridge pulled down the rebound. Then DeRozan, whose previous shot didn’t fall (thanks, perhaps, to some contact on his arm that was not called), was able to redeem himself and ice the game at the free-throw line.

There were essentially two different versions of Saturday’s game — the collapse, and the fairly dominant performance that came before it. Pop made a point to draw attention to that, referring respectfully to what happened previously as “the main game,” lauding the visitors’ effort, and calling it overall “a good win for us.”

And it was, for all the reasons you’re used to attributing to a Spurs win in 2019. LaMarcus Aldridge (25 points, 14 rebounds) had his way on the low block in just 27 minutes of action. Gay found his three-point stroke (3 for 4 from deep, 17 points and 8 rebounds) and made plays on both ends of the floor, and Marco Belinelli, who’s been the team’s third-leading scorer through the last 13 games, added 17 points on 7 of 10 shooting. Patty Mills and Bryn Forbes each had 12, both effective as shooters and secondary creators through the team’s increasingly drive-and-kick offense.

As with Saturday’s win, there are certainly more positives than negatives with this team through 54 games. They’ve now won 21 of their last 29 and are sitting in fifth place in a highly competitive Western Conference. If they go 12-16 the rest of the way, they’ll have eclipsed the over/under Vegas laid out for them at the beginning of the season.

And yet, Pop knows this team is not like most that he’s taken out with him on the typically catalyzing Rodeo Road Trip. “It’s a long list to get to,” he said of the qualities and habits he still needed to embed in his new team. “It’s the first year with all these new guys and everything — we can’t get to everything. We got lots of stuff we used to run that we don’t run; there’s defensive schemes we don’t do. You can’t stick a fire hose in people’s mouths, you know? We’re in the garden hose stage.”

Things are different with this group, one that now hits the road for most of February with a 21st-ranked defense that can succumb to dolorous swoons at any moment, and with a top-two player that is yet to emerge from his own month-plus playing slump.

DeRozan came into Saturday night averaging 15 points over his last 12, shooting 38.5% from the field and turning the ball over 3.8 times per game. His performance versus New Orleans (13 points on 3-of-10 from the field, 6 rebounds, 5 assists) didn’t do much to statistically improve that, but he did make a lot of things happen in the half-court by collapsing defenses and finding the open teammate.

“We’ve always looked forward to the Rodeo Road Trip, because it’s fewer distractions,” said Pop. “They have to depend on themselves more than ever, kinda like being in the foxhole together. So, win or lose, it’s always a good experience because you learn more about each other.”

Win or lose, sink or swim, the Spurs will have to take what they get on the road. Outside the AT&T Center there are trucks, marquees, signs, and turkey-on-a-stick stands, collapsed rides that are ready to fold out and light up, adjacent buildings already sectioned off and flooded with brown dirt. Ready or not, the Rodeo is here.

After four bats suspended play on Thursday only to evade capture, there was another sighting of one at almost the exact same point of the game on Saturday. This time, the Spurs were ready:

BatYote with the special assist!

It should be noted that there are at least three bats from Thursday still unaccounted for, so the Coyote will hopefully remain on his toes if the AT&T Center staff are unable to clear them away over the next 25 days.

Pau Gasol the first big off the bench again

Gasol remains ahead of Jakob Poeltl in the Spurs’ rotation, making the early appearance and mustering a 6-4-4 line in 15 minutes (to Poeltl’s garbage-time 7). Whether this is an attempt to get the previously injured veteran back on track or raise his trade value ahead of the deadline is hard to say. We’ll see if the minutes remain the same after February 7th.

Either way, here’s Pop on if he thinks Gasol has is back to the Pau of old since returning to action in January:

“No, not yet. He’s still getting his rhythm back, feeling confident in his shot and that sort of thing.”

A look ahead at the RRT

The upcoming road trip is not an easy one, with 7 of the their 8 opponents boasting a combined record of 210-126. I left off the Knicks, who are erroneously terrible, but even with that game being a likely W, the Spurs have a tough challenge ahead:

More of Pop’s thoughts on the RRT

“I enjoy getting out of town for a while and watching the guys on their own. You know, eating together, trying to figure out whether we need shootarounds or what combinations are gonna work best, who hangs with who — all those little things.”