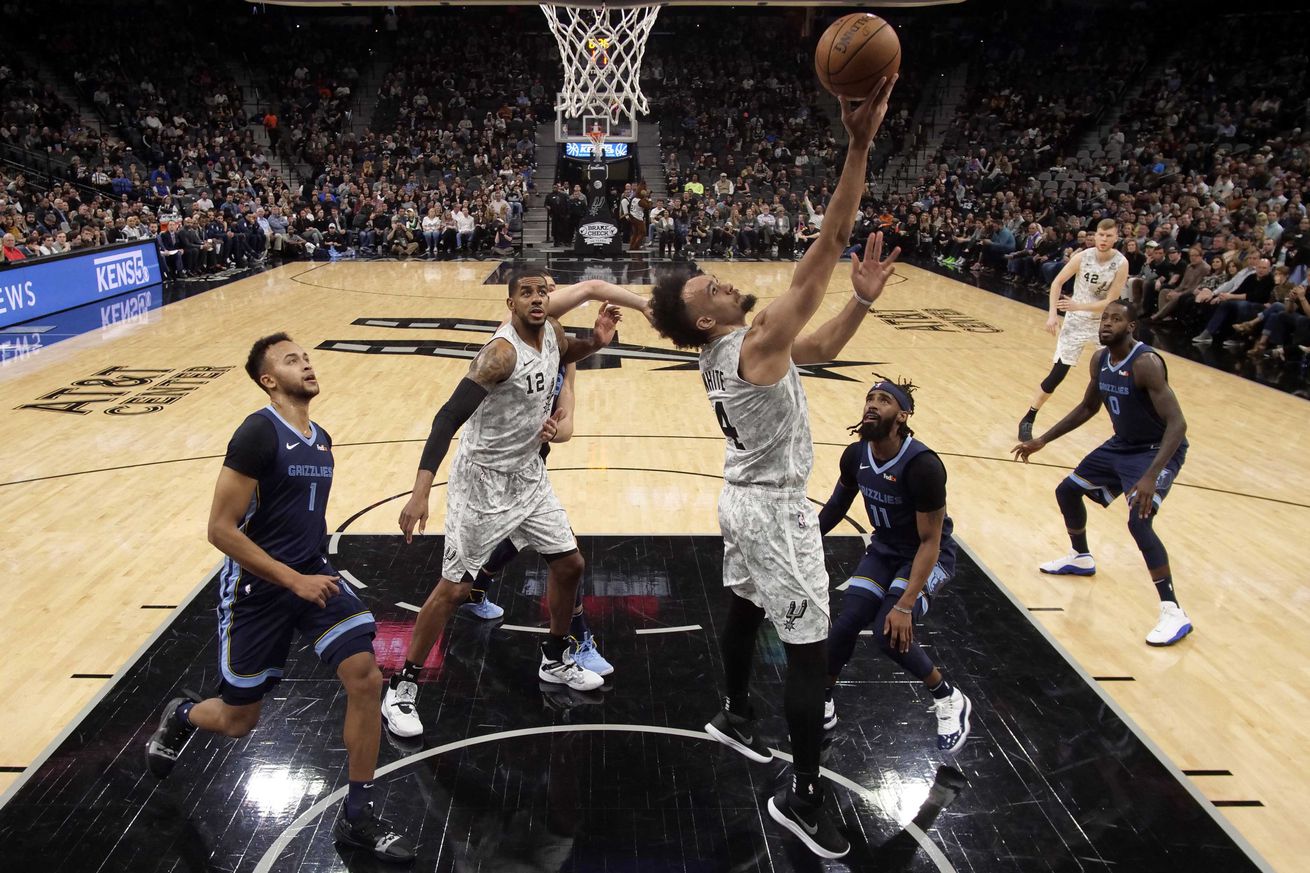 Another win, another reminder of how far the new-look Spurs have come from their early-season struggles.

Most of the talk after the Spurs’ November 21st loss to Memphis circled around a series of controversial late-game calls that sealed their fate and sent them below .500 for the first time on the season. They made sure Saturday’s rematch didn’t come to that, racing out to a big first-half lead and beating Memphis, 108-88, providing another reminder of how much things have changed since Thanksgiving.

Consider LaMarcus Aldridge’s dramatically improved shooting: 40.6% in the first 17 games through that Memphis loss, and 57.8% since. The Spurs’ big man had 18 points (5 of 9 from the field, 8 of 10 from the line) on Saturday and regularly worked to get deep position against a physical Grizzlies frontcourt. In a fourth quarter where the Spurs’ offense sputtered, mustering only 2 points in the first 4:49, Aldridge stepped up, scoring their next 7 points and helping stave off a late Grizzlies run that trimmed a 22-point lead to 10. He also chipped in a season-high 7 assists, getting many of them out of savvy passes out of the double team to three-point shooters — another dynamic that was missing in the first month of the season.

Gregg Popovich more or less scoffed when asked if any adjustment had contributed to the turnaround — “He’s a professional. That’s what their job is,” he responded — but there are at least a few stats that stand out in those before and after splits: averages of 11.4 rebounds and 35.4 minutes per game before, and 6.7 and 30.1 after. (On Saturday, he played 31 minutes and pulled down 2 boards, although the latter number isn’t indicative of the role he played in their overall edge on the glass.)

Whether or not fresher legs are a factor, the Spurs’ bellwether appears to have his groove back, although another part of the Spurs’ recent surge also showed out. Second-year guard Derrick White, who’d barely broken into the rotation the first time these two teams played, got the start again and paced the Spurs on Saturday with a team-high 19 points (on 8 of 9 shooting) and 4 assists, running the offense with poise while remaining aggressive as a scorer when necessary.

“He’s getting better,” said Aldridge. “He’s learning how to control the game, find his shot. I think every game he comes out, he’s getting more comfortable… Derrick is more of a true point guard. It’s showing with our team play, having a guy out there who’s making a point to move the ball and making shots — it makes life easier.”

It was White’s 5th straight game scoring in double figures, but perhaps more impressive was that it was a third-straight with the night’s toughest defensive assignment, taking on Mike Conley after getting Kyrie Irving and Kawhi Leonard duties in the two previous games. Conley’s tidy line (21 points on 7-of-12 shooting) is probably not indicative of another strong showing from White, which included plenty of off-ball activity, strong work on the boards, and a perfectly timed weakside block on former Spur Kyle Anderson.

“Derrick’s a talented young player who’s basically getting his feet wet,” said Pop before the game. “The people he guards every night are a little bit different than what he expected at the beginning of the season, so we couldn’t be more pleased with what he does each and every night.”

Alongside the novelties in San Antonio were the old staples — a defense-first victory, guys diving on the floor for loose balls, multiple drawn charges by Patty Mills, key players emerging seemingly out of nowhere, and Pop’s first technical foul of the season, as much a sign of this team settling into itself as any.

The story surrounding this team as of late seems to be hitting on all the usual Spursisms that simultaneously sound trite but ring true — and that’s just fine. After some trepidation, the cliches are back in San Antonio, in the best way possible.

Pop on White’s play of late

“He’s doing a lot of good things on both ends of the court. He’s improving and mostly because he’s got some skills and he’s becoming more confident in using them and feeling free out there. He’s not worrying about making mistakes, so he’s doing a fine job.”

Eubanks brought new meaning to the idea of a two-way player on Saturday. After taking on the Memphis Hustle in Austin in the afternoon, he saw the floor late against the Grizzlies and even got on the board by hitting two free throws. He can also frame this post-game quote from Pop, when the coach was asked about him (before dropping the mic and walking out from the scrum):

“Drew [Eubanks] is my favorite my player.”

(To be clear — I’m pretty sure he was kidding.)

The Spurs hit the deck multiple times in their win, but this was easily the most memorable: