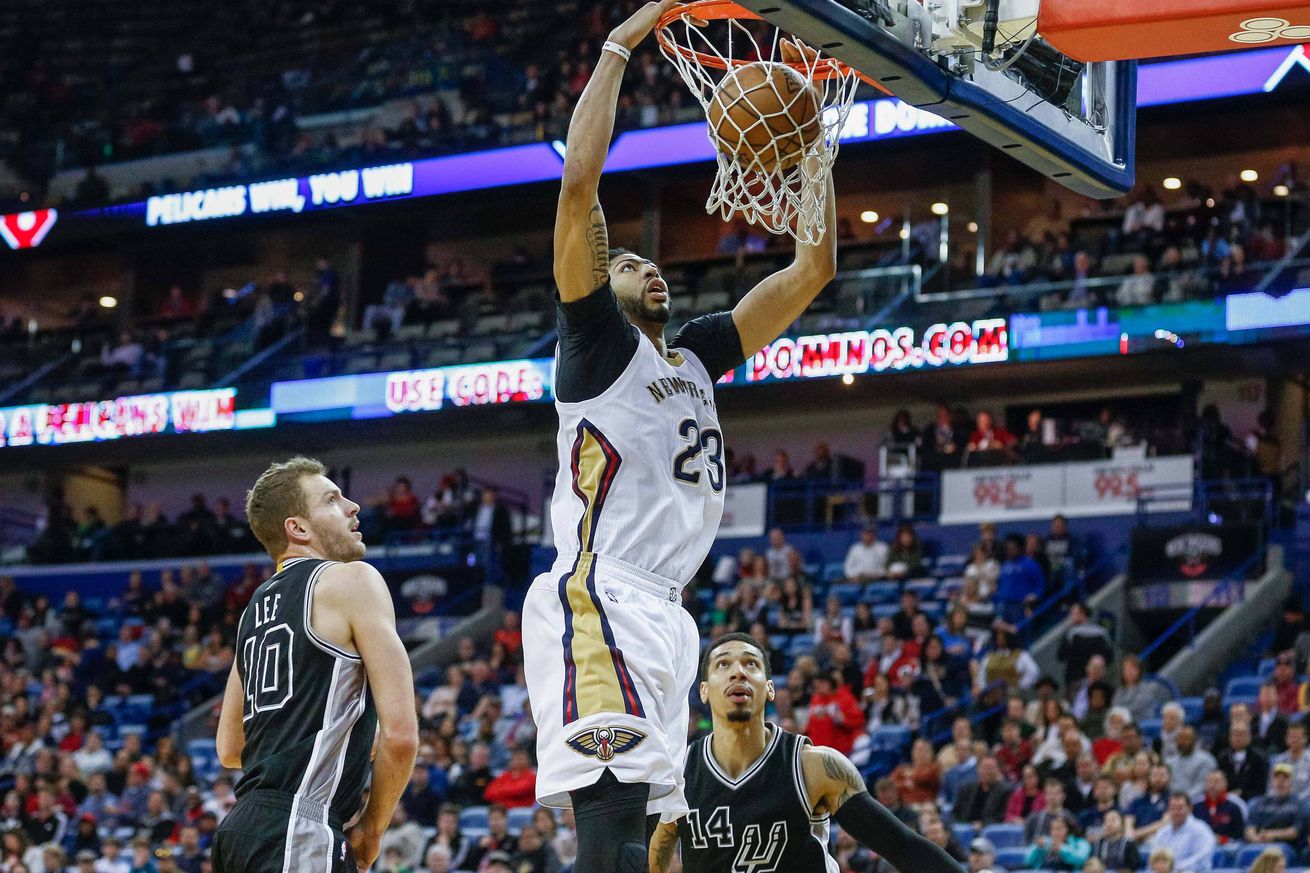 They were outscored 71-46 in the second half, but don’t worry, it looked worse.

In the macro sense, you can’t be mad at the loss. Not really. If I told you before the four-game road trip that the Spurs would go 3-1 even though they’d be without Kawhi Leonard and Tony Parker for three of the four, you’d have signed up for it no questions asked in a second, especially considering the opponents involved. Any of us would have. Heck Gregg Popovich would have.

But man it always leaves a bad taste in your mouth to drop the finale of an otherwise perfect trip, especially against a sub-.500 team.

And it’s particularly annoying to lose at the Smoothie King Center, where things have rarely gone smoothly for the Spurs. Ever since they won the NBA Championship in 2014, their personal house of horrors has traveled southeast, like a hellish game of The Oregon Trail in reverse, from Portland to New Orleans, where the Spurs have suffered through everything but a bout of syphilis in dropping four of their past five to a middling Pelicans outfit.

Perhaps you recall the early-season game last season, on Nov. 20, where the Spurs came into with a sparkly 9-2 record against a Pelicans squad that looked brutal to begin the season under new coach Alvin Gentry. New Orleans was 1-11 and riding a five-game losing streak. They trounced the Spurs 104-90, with Ryan Anderson lighting them up for 30 and looking like prime Dirk Nowitzki. Tim Duncan played 19 minutes that night and didn’t snatch a single rebound for the first time in his professional (or collegiate) career.

Or maybe you remember the regular-season finale from the year before. The Spurs had several buzzer-beater heartbreaking losses that season but looked to have righted the ship just in time. They had an 11-game winning streak and all they needed to secure the two-seed was one more win. But the game was important for the Pelicans too, they needed a victory to hold off a Kevin Durant-less —I know, right?— Oklahoma City squad for the eighth seed. The Pelicans won 108-103, with Anthony Davis going off for 31 and 13. It was a nightmare scenario for the Spurs, as various tiebreakers tumbled them all the way down to the sixth-seed, and they’d go on to lose to the L.A. Clippers in seven games in the first round of the playoffs, a most ignominious defense of their title.

It would be more of the same Friday night, where all things considered, the Spurs didn’t have too many excuses to play as poorly as they did. It was the finale of a road trip sure, but they had been in town for three days already, so jet lag was’t an excuse. Also, they had Leonard and Parker available once more, after they were waylaid by minor dings. They were still without Pau Gasol and Jonathon Simmons, but on paper this should’ve been no contest.

What we saw instead was a heavy-legged Spurs team that perhaps enjoyed their down time a bit too much and wound up paying the price. Ironically, “The Big Easy” led to quite the difficult time on the court. Did they party it up in the French Quarter on Thursday and not have anything left for the fourth quarter on Friday? Did Rue Bourbon lead to rueful shot-selection? Or was it too much time at the craps tables hoping to shoot sevens what caused them to crap out against the Pelicans shooting threes?

(I can do this hacky stuff all day.)

Whatever the reasons were, the Spurs’ individual performances ranged from mediocre (a rusty Leonard, David Lee, Davis Bertans and, charitably, Manu Ginobili) to terrible (just about everyone else). The guys who were useful on offense gave them nothing on the other end. The ones who were poor on offense also gave them nothing on the other end. Parker spoke afterward about the game plan being to suck in the paint —ahem— and let New Orleans’ poor outside shooters launch bricks. Solomon Hill, who came into the game shooting 32.8 percent from three burned them by making 5-of-7 from deep, but with all due respect to Parker, I don’t think that had as much to do with the loss as the Spurs allowing 60 points inside the paint to the Pelicans in spite of all the collapsing they did. Nor do I think it helped matters that the Spurs managed only 30 points inside of their own. When one team shoots shoots 21-of-57 on twos and the other makes 35-of-63, you really need to have an epic swing from the three-point line to make up that kind of difference. Instead, both teams were pretty good from out there.

Quietly, the Pelicans have built a roster uniquely designed to annoy us. Davis is a monster against everyone, of course, but Jrue Holiday has always given Parker fits. To that foundation they added a pair of Spurs-killers in Terrence Jones and Donatas Motiejunas, and the former Rockets both played well, combining for 31 points, 14 rebounds and 5 assists. San Antonio’s bench rarely gets outplayed badly, but they were on this occasion. Bertans sank five threes, but Patty Mills looked fatigued and Kyle Anderson was perfectly brutal in a do-nothing, Kyle Anderson sort of way.

The only real frustrating part of the game was that the final score belied the competitiveness of it through three quarters. The Spurs shook off a blah first quarter —where Davis and Holiday played long enough to feast on the reserves— to take a nine-point lead at half. Leonard scored 14 of his 23 in the second period, getting to the free-throw line at will, while Lee added 8 points and both Ginobili and LaMarcus Aldridge chipped in with five. Yet despite the Spurs’ 37-point blitz in the quarter the Pelicans hung in, shooting 61 percent in the quarter and making 9-of-12 from inside the paint. They took the visitors’ best punch and were undaunted.

The game turned in the third quarter. The Spurs still lived at the line, making 9-of-10 freebies, but only Bertans was hot from the field. Conversely no one could miss for N’Awlins, with unheralded E’Twaun Moore leading the way with 11 off the bench. The Ginobili-to-Bertans connection was all that kept the Spurs in the game, and they found themselves trailing 85-84, with all the momentum squarely with the home side by then.

Curiously, Popovich benched Ginobili to start the fourth when normally he continues his bench rotation in the overlap between quarters. Maybe he was looking to save him for the stretch run. Unfortunately, the Spurs’ offense took a seat alongside the Argentine sixth-man as they shot 6-of-20 the rest of the way compared to the Pelicans 13-of-25. The game quickly got away from them, to the point where bringing Ginobili back in wasn’t logical. Leonard and Aldridge took mostly contested shots while the Pelicans got whatever they wanted.

So it goes. It was, probably, their worst all-around performance of the season and still they were within five after a Danny Green three with 7:16 to go. They just couldn’t string any stops together or get anything easy.

I suppose it could’ve been worse. Imagine losing to these guys with your big three logging heavy minutes and combining for 97 points and Davis not even playing. There, you feel better now, right?

Speaking of feeling better, the Spurs return to the AT&T Center against the Western Conference’s version of Homecoming Week, the Mavs. Okay, Mark Cuban’s dudes have been better of late since their miserable start, having won five of their past ten, but they did drop their most recent game, Thursday at the Thunder, allowing a mere 45 to Russell Westbrook. The Spurs have won both the previous two meetings this season, though narrowly, first 96-91 at home on Nov. 21 and then again 94-87 at Dallas on Nov. 30. Neither side was close to full-strength in either of the games and they likely won’t be in this one either. Pau Gasol will still be out with his broken finger for the Spurs while Wes Matthews (hip) and Deron Williams (toe) are both questionable to play for Dallas. Pesky J.J. Barea will definitely miss the game with a calf strain.