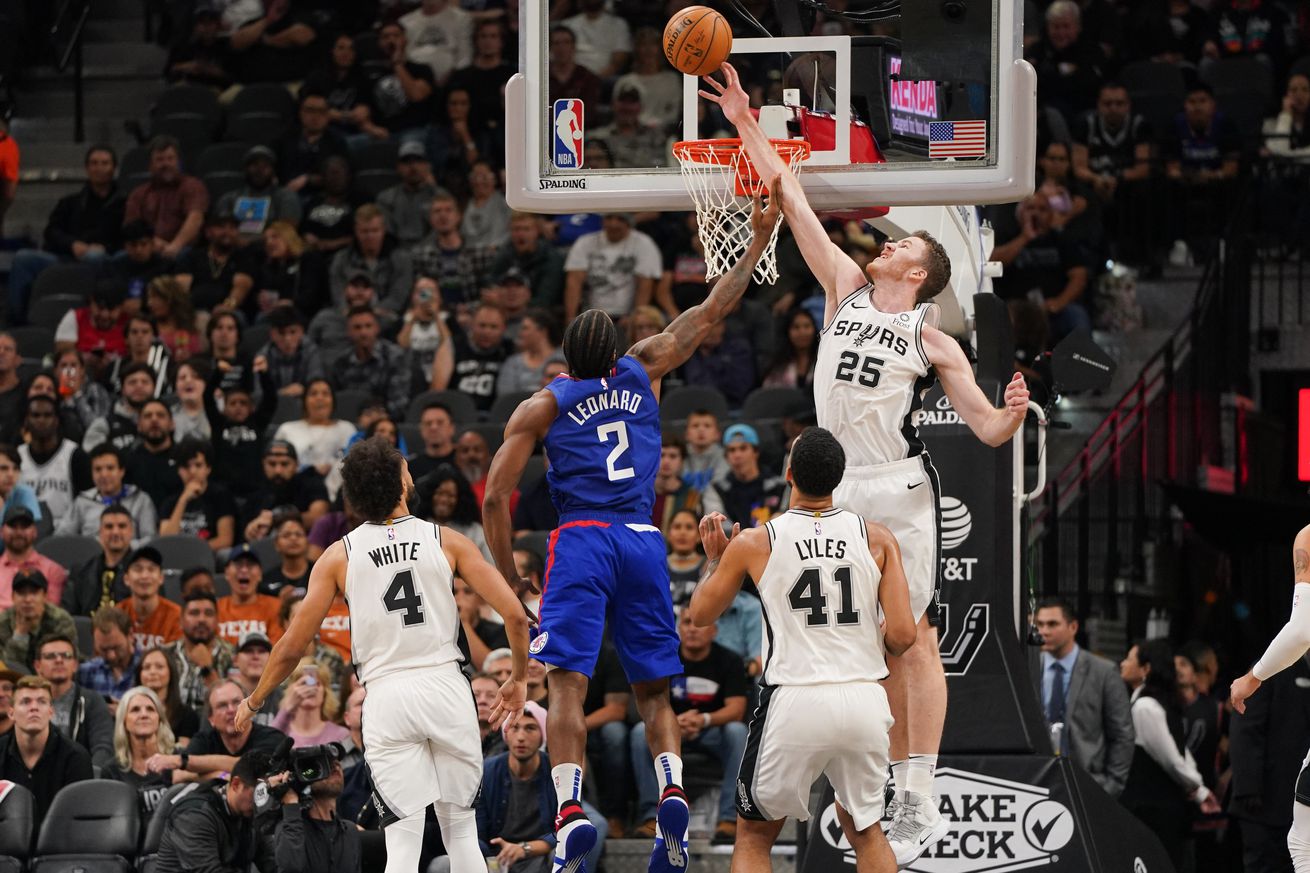 The Spurs rode a strong defensive effort and a balanced attack on their way to victory, improving to 7-13 and 2-0 against Kawhi Leonard at the AT&T Center.

The Spurs’ shaky start has been an identity crisis at times. As poor defensive performances and 4th quarter breakdowns pile up, a vexed Gregg Popovich has rightly noted that this team, one that’s already banked an 8-game losing streak, is largely the same as last year’s 48-win group. In looking to rediscover what worked, he’s tinkered with lineups and experimented with rotations, swapped starting point guards and divvied out DNPs to rotation players, every night a slight tilting of the light this way or that as the team tries to recognize its own reflection in the mirror.

It could be that Doc Rivers knows the Spurs better than they did themselves. Speaking before Friday’s game between San Antonio and LA, the Clippers coach dismissed any fatalistic takes on the Spurs’ struggles. “They’ll get it going at some point. We’re just trying to see if they can just not get it going tonight, you know,” he said to some laughter, while continuing: “But you know they will. They have capable players, they have Pop and the whole thing going here. It’s not falling apart anytime soon.”

Doc’s quote proved prophetic, as the Spurs pieced together their first full game of the young season and beat his Clippers, 107-97. The victory snapped a 5-game home losing streak for the Spurs and kept new Clipper Kawhi Leonard winless in San Antonio since forcing his way out. It also halted the Clippers’ win streak at 7 and gave them their first loss with both Leonard and Paul George both in uniform.

The win came through the kind of effort and edge the team’s seldom shown this season on the defensive end. Ball-handlers were funneled into inefficient looks, shots around the rim were contested or sent away and sound rotations were rewarded with steals. Leonard went 8 of 23 from the field for 19 points under an unrelenting deluge of boos, while George made just 2 of his 11 attempts and finished with as many turnovers (5) as points.

On the other end, the team made up for the cold shooting of its own stars with a balanced attack and aggressiveness from its role players. No one should be surprised by Patty Mills’ willingness to pull up from deep (he chipped in 13 points on 3 of 7 from three-point range), but Trey Lyles (2 of 6) and Derrick White (a career-high 5 of 7) both made use of green lights to let loose from distance at will. White’s high volume was especially encouraging after watching him pass up open opportunities a few games ago.

“We’ve been saying that all year,” Pop said when asked about White seeking out his own shot. “He’s just gotta have confidence and let that thing go.”

Responded White later with a smile:

Pop’s desire for more of the same from his starting guard encapsulates the question facing the now 7-13 Spurs: How do they carry over the elements from what is easily their best win of the season and try to right the ship? Post-game quotes from players predictably (and understandably) echoed factors like effort, focus, and following the defensive gameplan to a T, but fans hoping for repeat performances would preferably deal in more transferable concepts.

It could be that the team is finally onto some of those, too. Maybe there was a meaningful change in communication or strategy in how the team defended one of the league’s most talented duos. Maybe they’ve found the right role for Dejounte Murray for the time being, splitting time between the reserves and serving as a secondary creator at the ends of the first and third quarters with DeRozan and Aldridge. Maybe Pop’s use of the same starting five that anchored their December turnaround last season (with Rudy Gay as the starting 4 for the first time in 2019-20) heralds a similar trend.

At least for one night, they looked the part.

If we’re not counting Drew League or the preseason (DeRozan went 3 for 3 in an exhibition win over the Grizzlies), Friday’s catch-and-shoot make by the Spurs’ throwback guard was his first in 11 months:

Before tonight, DeRozan’s last 3-point make was Dec. 26, 2018. He turns into Steve Kerr the day after holidays, apparently.

I still wouldn’t expect it to become a habit all of a sudden for him. Here’s DeRozan when asked about it afterward:

Poeltl and Aldridge made life difficult for any Clipper attempting to score around the basket, with the Austrian receiving the loudest cheers of the night early in the game after having recorded his 2nd block on Leonard in one quarter. The duo combined for 8 blocks in total, 4 a piece. Per Poeltl, it turned into a friendly contest as the night went on:

“It was definitely a competition tonight. We were going back and forth with each other. I’m pretty sure I was aware of my blocks, how many I had, the whole game.”

Dejounte contributing in his new role

It’s still not a perfect fit, but things look more settled with Murray in his new role. Pop has him check in towards the 2nd half of the 1st and 3rd quarters, splitting time with DeRozan and Aldridge before playing with the more movement-happy reserves. It feels like a good developmental compromise that allows Murray’s strengths to shine.

He did a sound job sticking with one of the best reserves in the league, Lou Williams (2 of 10 on the night for a season-low 7 points), and now has put up a positive plus/minus for 2 games in a row. That hasn’t happened since the first 2 games of the season.

No minutes for Walker and Carroll

Pop’s 10-man rotation for most of the game didn’t include Carroll (DNP) or Walker (1 minute of garbage time).