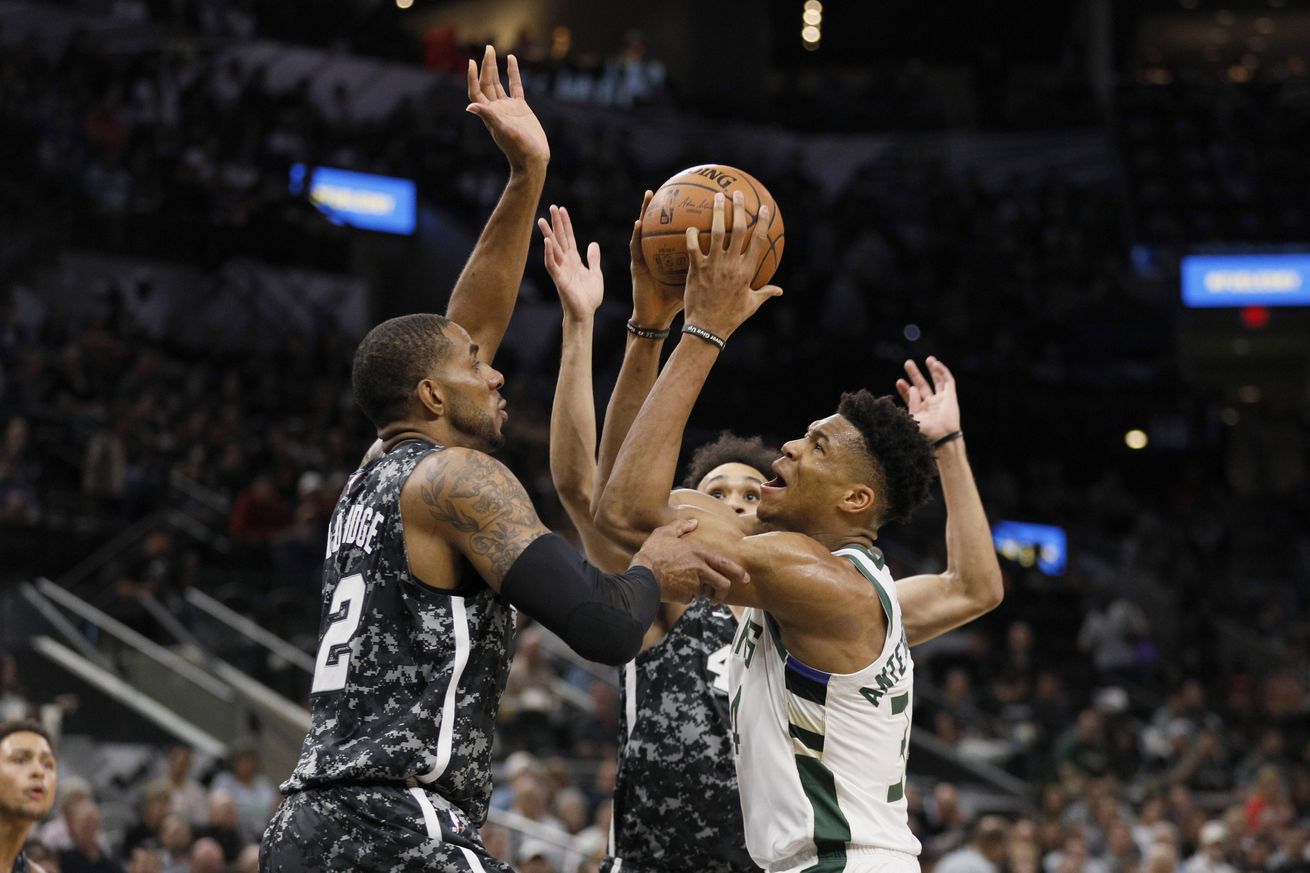 A win over league-leading Milwaukee made it five straight for a Spurs team that’s admittedly still trying to figure itself out.

Don’t expect much affirmation from Gregg Popovich after a win, not when San Antonio gets by on the skin of its teeth versus lowly Phoenix or following a 121-114 takedown of the league-leading Milwaukee Bucks.

The Spurs coach has long been the necessary chaser to what could otherwise be an intoxicating result, and Sunday was no different. His post-game calibration highlighted the quality of his opponent — “It’s a really fine team,” he said. “Obviously talented, athletic, physical; Mike [Budenhozler] has done a great job of putting in a system that works for those players” — the challenging circumstances they faced — “We caught a break, because it was a back-to-back for them” — and the just-one-gameness of it all: “We’ll just see if we can honor it by continuing to play well.”

More than hitting his usual, gracious beats, Pop knows better than to talk of turning corners with this group, who he’s seen appear to have figured things out in December only to hit a wall the next few months.

“I’m just seeing an enigma that we’re trying to figure out. If I was smart enough to figure out what was going on there, I would do that, employ it — whatever knowledge we got — and hopefully stay in that area.”

The win made it five straight for San Antonio. Worth noting: a W against the Mavs on Tuesday would mark a bold step into the unknown, as five is as far as this team has gone (albeit three times now) this season.

To avoid hitting a figurative snag on Sunday, the Spurs had to build more literal obstructions against one of the MVP frontrunners, Giannis Antetokounmpo. While LaMarcus Aldridge got the primary assignment of trying to slow the Greek Freak down, it took a supporting network of collapses and rotations by his teammates to make life difficult for the All-NBA forward, whose downhill drives to the basket resembled a weather system quickly gathering strength as it barrels towards land.

In embracing that inevitability, the Spurs’ defense was at least a makeshift levee upon which the storm broke. Bodies converged at the rim, contested, and then scrambled with each kickout to the perimeter. Bryn Forbes (12 points, 6 rebounds) spoke of the concerted focus it took to face him:

“Giannis is a hell of a player. Just trying to build a wall — it’s a team effort, not just a one-man effort… I think we did a good job, especially late in the game.”

Antetokounmpo still bulldozed his way to an impressive line of 27, 13 and 6, and got help from Eric Bledsoe (21) and Khris Middleton (15), but the Spurs will live with that when their own star duo are both in the zone. Aldridge and DeMar DeRozan combined for 57 points on 24 of 46 from the field, anchoring the team’s offense and creating breakdowns for the three-point shooters to exploit.

“If DeMar’s going and LA’s going, we’re gonna be a hard team to beat,” said Forbes. “If they’re both in their rhythm, they score the ball so well, that’s a lot of points they’re gonna have to stop.”

Aldridge, who complemented his 29 points with 15 rebounds, 2 blocks and 2 steals, remains a rock for this team. He also appears to be taking a late-season shine to the three ball, going 3 for 5 from beyond the arc over his last 3 games. Meanwhile DeRozan continues a post-All-Star Break tear in which he’s shot over 54% from the field while averaging 22.4, 6.3 and 6.1. Combine their production with the team’s elite outside touch and a return to big ball that has seemingly steadied the defense and, who knows, the Spurs may be on to something.

If a win over the league’s best doesn’t affirm who this enigmatic team is, then it still may be a reminder of how good they can be. Either way, it won’t hurt to have one of the game’s best minds serving as codebreaker, trying to figure it all out.

Much like the first time these two teams met, the Bucks raced out to a 15-point lead in the opening quarter, only for the Spurs reserves to help key a comeback. Patty Mills and Marco Belinelli (16 points a piece) were both feeling it, while Davis Bertans made up for an off night (2 of 8 from the field) with his hustle and off ball movement. The Spurs also took a lead into the fourth quarter in both games but, unlike in November, were able to hold on this time around.

Gasol, who joined the Bucks after being bought out by San Antonio earlier this month, was greeted to a round of applause and video tribute set to Fleetwood Mac’s “Don’t Stop”. The Spurs’ welcome for their former center quickly turned into a neverending series of pick and rolls attacking the 38-year-old, who ended the night with just 3 points and 3 rebounds and, more importantly, a -20 plus/minus in just 15 minutes of action.

Rudy out with an illness

While the Bucks had their own scheduling disadvantage (not only did they play in Milwaukee the night before, but they lost an additional hour of sleep due to Daylight Savings), the Spurs came in with a handicap of their own. Missing third-leading scorer Rudy Gay forced Pop to essentially roll with an 8-man rotation, quickly scrapping Dante Cunningham after 4 ineffective minutes.

Pop on the team’s up-and-down season

“Probably part of the answer is we haven’t been together long enough, either in the system or the players with each other, to form habits and be consistent in those areas… So it hasn’t become a habit yet. The culture hasn’t sunk in definitively enough to have that consistency. We’ve been used to that for a long time — it’s good to see that it’s there in spurts, which makes me feel like we can get it together as time goes on.”

Pop on DeRozan creating three-point opportunities for his teammates

“We don’t really have people that blow by anyone. With DeMar, with his strength and size, he’s been able to get into situations where he’s found other people on the court, and it’s been a blessing for us, because we don’t have a lot of downhill guys, so to speak. But he’s provided that for us — and if he hadn’t, we’d really be in trouble as far as shooting three-pointers.”

“He’s been spectacular… Everything he’s done has been off the charts and I couldn’t be more thrilled for him. He wasn’t expecting to be a point guard, he wasn’t expecting to be starting, and here he is after a year in the D-League with his buddy Bryn. Both of those guys have been really spectacular for us, given us a chance to be in the playoffs.”

Pop on the team’s history of player development

“Well, we’ve had great people in those positions for over a decade. We’ve developed a lot of players as time has gone along, either as second-round picks or people we’ve picked up that no one else wanted. But, you know, going back to before with Chad Forcier and now Chip’s been here for a long time. He’s been a part of it for a very long time, the most important part. Chad did that, and Monty Williams was only here for a year but he helped with development. You can go all the way back — there are people in lots of organizations that went through here, from the film room to development, and somebody grabbed them. They’re all over — I’d be remiss to start naming too many because I’d forget somebody. Development has been very important here. The group that we have now has been fantastic, and they’ve continued to do that. Cory Joseph… Kawhi Leonard… Bryn, Derrick, and others. It’s been part of what’s kept us being competitive for so long.”