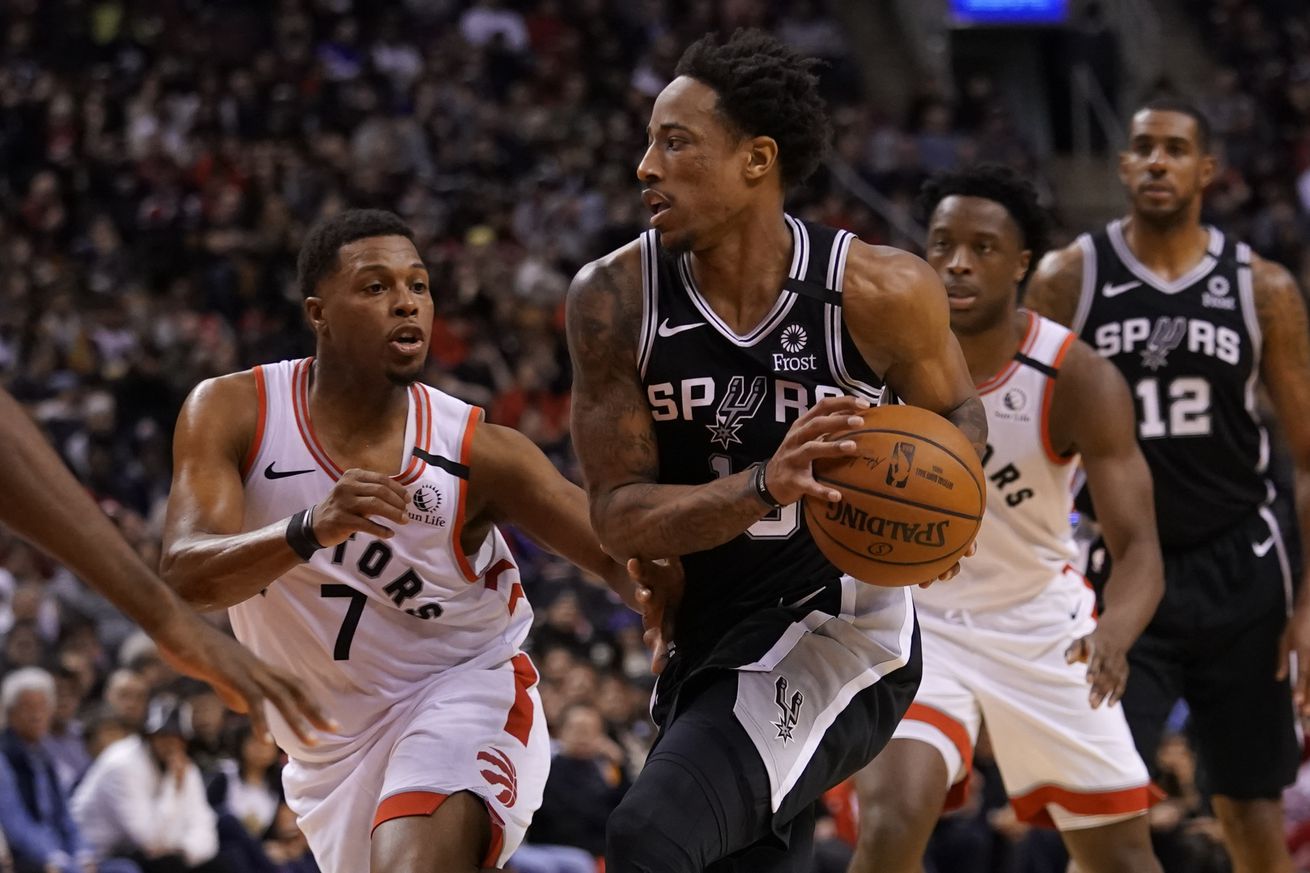 The Spurs win their third straight game against Eastern Conference powerhouses fueled by a fourth quarter comeback against the Raptors.

Through the first 32 minutes of their game against the Toronto Raptors, it looked as though the San Antonio Spurs’ offense had failed to clear customs. The Raptors used their second-ranked defense to swarm DeMar DeRozan any time he touched the ball, taking the Spurs out of their rhythm on offense. DeRozan had only seven points at this point in the game, and the Spurs found themselves down 56-74.

To DeRozan’s credit, he wasn’t trying to force the issue despite going up against his former team. He was making the right basketball plays, but his teammates were failing to knock down the shots necessary to force Nick Nurse into switching up his defensive strategy. This game was giving me flashbacks of the Spurs from two seasons ago when the offense would come to a complete stop anytime teams started trapping LaMarcus Aldridge in the post. DeRozan is the main reason the Spurs have sported the second best offense over the past ten games, and it is a bit concerning to see how a good defense can expose the Spurs’ lack of playmakers in the starting lineup outside of DeRozan.

As great scorers often do, DeRozan refused to be stymied for an entire game. He broke free for ten points over the final four minutes of the third quarter, but the Spurs still found themselves down by 13 heading into the fourth quarter.

To start the fourth quarter, the Spurs — who are now at the cutting edge of modern NBA basketball — implemented the one thing teams lean on when trying to mount large comebacks. No, not a barrage of desperation three point attempts. That was so last season. The Spurs actually only made three three-pointers in the fourth quarter. Instead, the Spurs started the fourth quarter by switching to a zone defense.

Yes, that’s right, the dreaded zone defense. In an era of analytics, NBA teams have designed offenses around ball movement and shooting, two things that typically stop a zone defense dead in its tracks. I consider the zone to be a last resort death sentence, but maybe that’s because I don’t consider the Spurs to have the personnel required for playing strong zone defense.

In all fairness, despite the way modern NBA offenses are built, zone defensive possessions have actually increased in each of the past three seasons. As we saw against the Raptors, it can catch teams off guard when executed properly. The Spurs completely flipped the script on the Raptors, becoming the aggressors on defense and forcing the Raptors to live or die by the three. After trading a few baskets to start the fourth quarter, the Spurs went on a 17-0 run to take their first lead since the beginning of the game.

I also consider Marco Belinelli to be a last resort death sentence, but he ended up playing the entire fourth quarter while Pop was searching for an offensive spark from somebody other than DeRozan. Pop did find the offensive spark he was looking for, but it came from Derrick White and not Belinelli. White scored nine of his 13 points in the fourth quarter and helped anchor a strong defensive performance from the closing unit.

Belinelli was given two wide open looks from deep towards the end of the game that would have likely sealed the win for the Spurs. As each of those shots clanked off the rim, I became increasingly upset with Pop’s refusal to sub Belinelli out even though I felt the Spurs’ comeback had been despite him and not because of him. My anger only increased when the Raptors went on a 10-0 run to take a one point lead with 40 seconds to go. I was ready to spend my entire recap article ranting about Belinelli receiving more minutes than Lonnie Walker IV.

Then, with 28 seconds to go, Belinelli calmly let a defender fly by him before knocking down what ended up being the game winning shot. For those who don’t think these players feel the pressure building during times of struggle, look no further than Belinelli’s face after knocking down that shot. It was as though an infinite amount of psi had just been deflated from his body. It was a nice moment for him.

The Spurs have now won three out of their last four games, with each of those wins coming against top four teams in the Eastern Conference. They will get a chance to complete the quadfecta of top teams in the East if they are able to beat the Miami Heat on Wednesday. Two full days in Miami can be dangerous, so don’t be surprised if the Spurs come out sluggish to start.