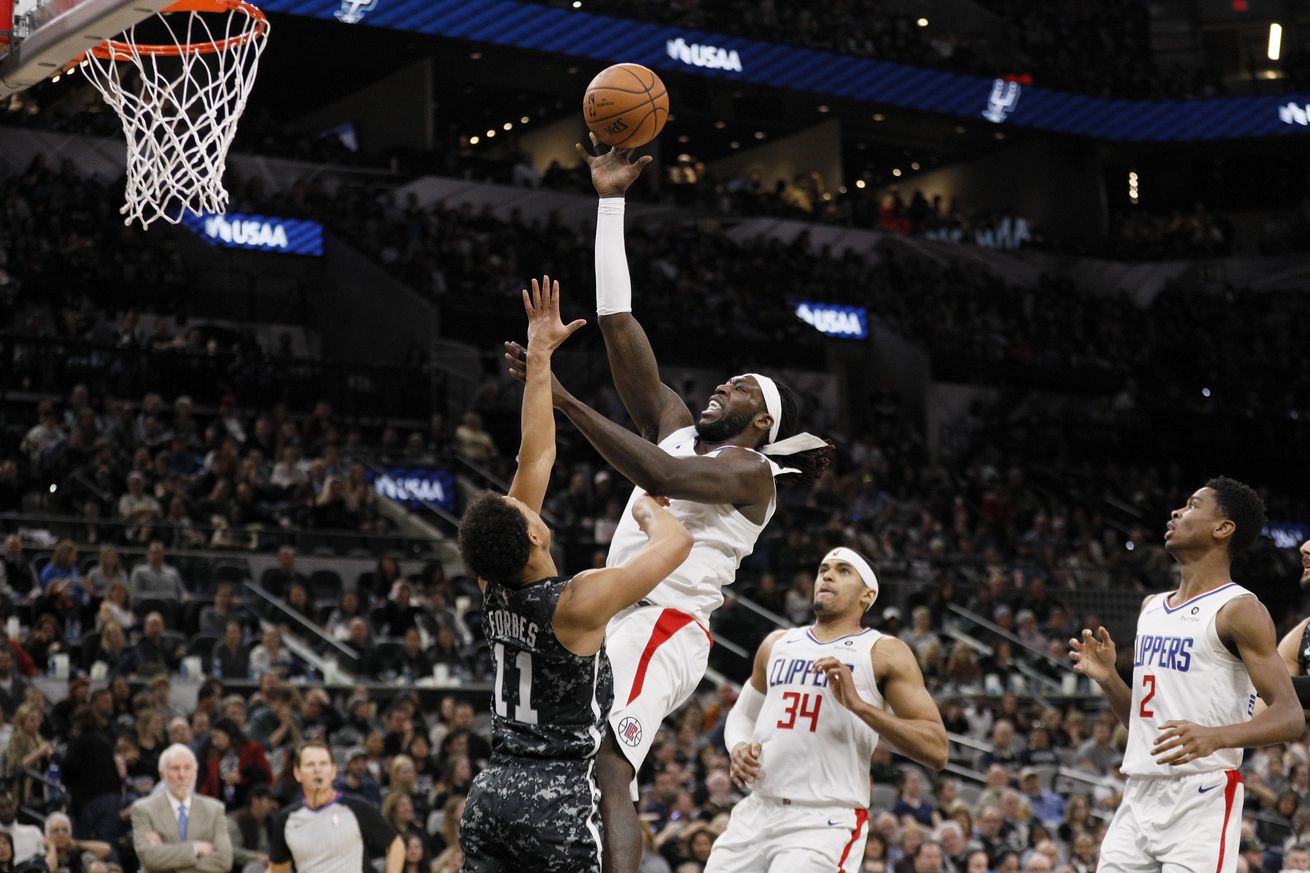 After winning two straight on the road and facing a team down two of its best players, the Spurs came up short and dropped another winnable game at home.

In their most natural form, media scrums are a scramble for answers that don’t really exist, as reporters hold out their mics and phones and ask players and coaches, on the spot, to distill the vagaries of their sport into quotes of substance or, better, narrative. Even on nights where you fade timidly into the background, you’re still a complicit part of the exercise.

Sometimes, however, they can foreshadow a game quite nicely. Outside the visitors’ locker room before the tipoff between the Spurs and Clippers, Doc Rivers entertained all the requisite questions, including how his squad, losers of five straight and playing without both Lou Williams and Danilo Gallinari, might gut one out in a tough environment. Specifically: What does he tell his team on nights like this?

“Win. That’s it… You can still win games that way (while missing your two best players). The one thing you know in the league: you can’t win 10 in a row that way, and you can’t win a series that way, but you can win one game. And that’s what our guys have to understand. Just win today and see if one of them can play tomorrow.”

Rivers was right, even before explicitly proving so with a plucky 103-95 win on Sunday: In a season that’s serialized into 82 parts, there’s enough variance in effort, execution and sheer serendipity to make most outcomes possible.

While the Clippers coach was his usual gregarious self in pregame, Gregg Popovich was equally on brand, quickly parrying questions about Rudy Gay’s recent 15,000-point milestone — “What do you want me to do — send him a card? It’s just basketball.” — and what the NBA might be able to adopt from the European system — “I’m not here to philosophize. Ask Adam Silver.” The more you see it up close the more performative it feels, not as a rebuke of the reporters doing their jobs but of the superficial nature of it all. Some questions may not merit consideration, while others can’t be answered without meaningful consideration. Either way, it is just basketball.

After the dust settled on Sunday, the answers offered in the Spurs’ post-game scrums shed a pinhole of light as to why they’d suffered another disappointing loss at home.

“We didn’t compete,” Marco Belinelli (12 points) said afterward. “It’s not the first time — we lost the game against Charlotte; we lost a couple of games at home. We can’t do that.”

There might be deeper truths to the poor result than the words White and Belinelli likely echoed from the team’s post-game talk in the locker room, but there isn’t always a compelling throughline that summarizes it all. Sure, you can point to the the Spurs’ 9-of-17 shooting from the free-throw line, but the Clippers didn’t fare much better at 14-of-24. Yes, San Antonio turned the ball over 18 times to LA’s 11, but also created 6 more opportunities on the offensive glass, out-rebounding them, 10-to-4. DeMar DeRozan had his worst shooting night of a Spur (4 of 16 from the field for 8 points), but his counterpart in the Clippers’ backcourt, rookie Shai Gilgeous-Alexander, had the worst shooting night of his career, going an equally poor 3-for-15.

The Clippers certainly deserve credit, beginning with the balance of aggressiveness and discipline they showed on defense. Whether it was Avery Bradley stymieing DeRozan’s isolation attempts, Patrick Beverly’s activity on the perimeter, or the live ball turnovers they forced as a team with active hands and defensive rotations, their focus and effort didn’t let up, which is precisely what an overmatched group needs on the road. Timely timeouts by Doc Rivers also seemed to nip potential Spurs runs in the bud before they built any more momentum and, in a game of runs, the visitors were always there to push back and keep the momentum their way.

Anyone hoping for a greater explanation from Pop afterwards would be disappointed. The Spurs coach appeared for 30 seconds, complimented his opponents’ execution, lamented his own team’s, and left without taking any questions — not that they were likely to enlighten any further anyway.

(In case you’d like to know what was actually said)

“The Clippers were missing 40 points in a couple of guys that didn’t play tonight. We’ve all seen it many times in the NBA. It’s one of the mysteries, where it always seems like that team that comes up and plays well, and the team that has everyone kinda loses a little bit of emotion, or juice, or whatever you wanna call it. I think they out-executed us and out-competed us tonight, in every way, shape and form, and we were sloppy on top of it — and that’s a bad combination.”

The Spurs paid tribute to Dr. Martin Luther King Jr. in advance of MLK Day on Monday. At halftime they showed a video of a recent team visit to the ___ Museum in Memphis. Moments before tip, Patty Mills addressed the crowd and spoke of the day’s importance:

“We are honored and proud to celebrate the legacy of the Reverend Dr. Martin Luther King Jr.”@Patty_Mills addressed our Spurs family pregame about honoring the life of MLK. pic.twitter.com/59ljIN56ye

To his credit, Pop didn’t deflect every question thrown his way in pregame. Here’s a response to the role that shot doctor Chip Engelland has played during his time in San Antonio:

“I’ve said it many times before. He’s developed so many players over the couple of decades that I’ve been here… The players really respect him. He’s got a great way about him. The process he uses has helped many people, on our team and other teams. We’d be lost without him — he’s been really special.”

“He’s funny. I was at dinner with Sean Elliott last night — he’s a true Spur, ‘cus I tried to get some information and he wouldn’t give me anything — but we were talking about Belinelli and I was like, “My gosh, that dude is never balanced.” I coached Ray Allen, who would do drills with a box, and if he didn’t land in the box he would punish himself to do 10 more shots. Belinelli would never do that drill — he’d be dead before he finished it. It’s just amazing. And what I’m amazed by — he shoots falling left and he shoots falling right. Usually with guys, when they do shoot off balance, they go one way. What it tells you… he must practice a lot. Because you can’t do that on the fly.”