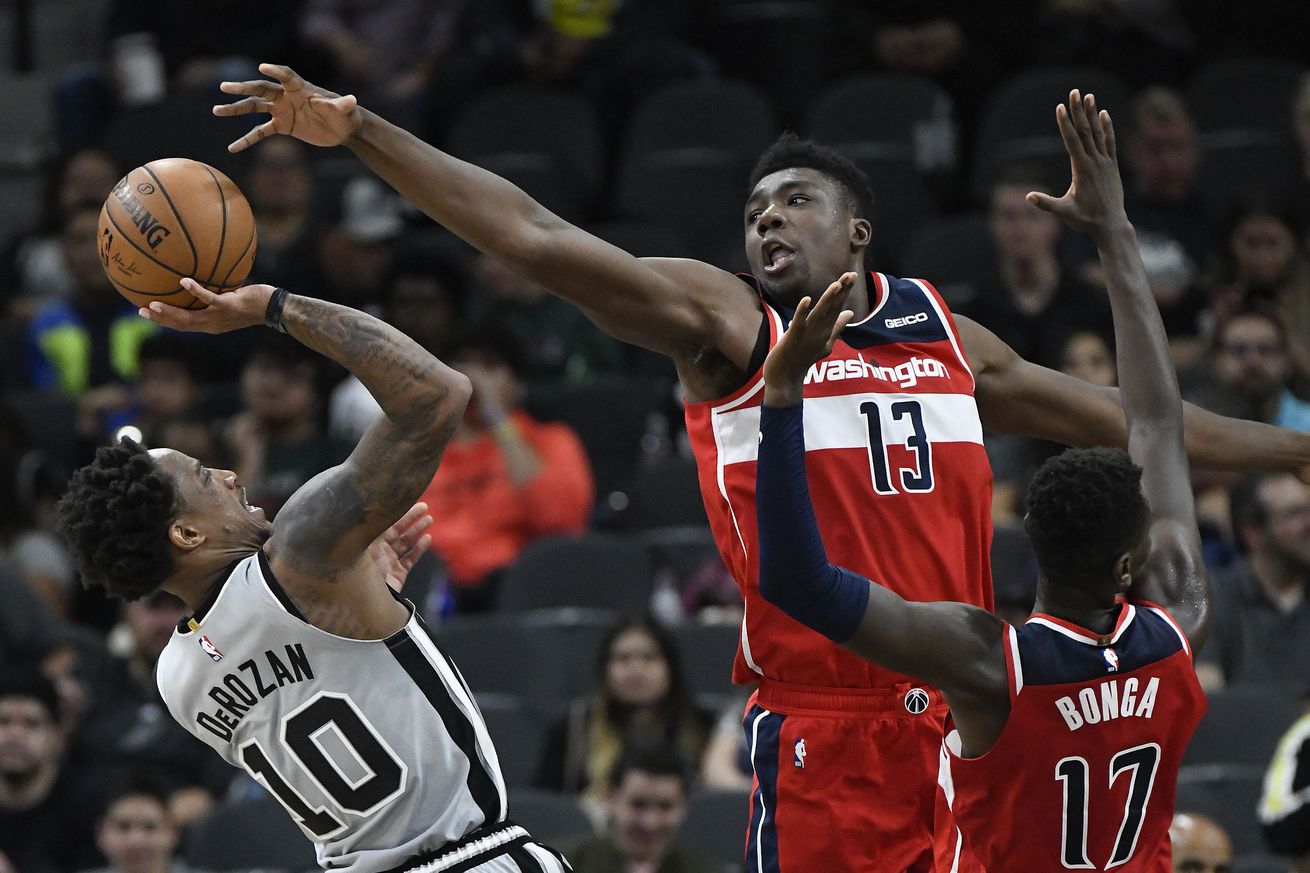 San Antonio gets its second win in as many games this season in a sloppy but entertaining matchup with the feisty Wizards.

You have to love early season basketball, when everything is forgiven. And there was a lot to forgive in the Spurs’ fun, sloppy, chaotic, unnecessarily suspenseful 124-122 win over the Wizards.

It really was a mess of a game, at times. San Antonio looked as discombobulated on both ends as it did during the worst parts of last season for large stretches. Transition and secondary transition defense were a disaster, and any play the Wizards ran involving misdirection had a high chance of working in the half court. The offense was good on the break but mostly consisted of strong individual efforts in one-on-one situations or after a couple of passes when Washington’s defense was set. Had this performance happened in December, no Spurs fan could actually be encouraged by it in any way.

Fortunately, it was just the second game of the season, and we can look past all the flaws and enjoy one of the most entertaining nights of basketball that will be played in San Antonio all year.

Both the Spurs and Wizards gave everyone all the highlights and narrative twists they could handle. Isaiah Thomas looking like his old self, at least for a few offensive trips; Dejounte Murray showing that he’s a game-changer on both ends; DeMar DeRozan sporadically exploding for dunks but also working like a master craftsman from mid-range; Davis Bertans having a revenge game, raining fire from outside; Rui Hachimura looking as clueless as he is talented; LaMarcus Aldridge hitting from inside, out and everywhere in between. The game really had it all. Even the ending was perfect, as Derrick White and Dejounte Murray, in the first seconds they’ve ever shared on the court, combined to contest and block Bradley Beal’s potential game-tying floater to secure the win for San Antonio.

It’s almost a shame to have to talk about the stretches in between the big moments instead of just bask in their beauty, but that’s what we need to do in hopes of learning something meaningful. The obvious lesson this season has taught us so far is that the Spurs have a lot of work to do. They were blessed by the schedule makers, who set them up to open the season against two young teams which are trying to figure out their identity, because had they performed as they did against the Knicks and Wizards against more disciplined and talented squads, they could be 0-2 right now instead of undefeated. There’s a lot of room for improvement, to put it mildly.

There will be time to worry about that later on. The Spurs do seem to have the pieces needed to be good already in place and need to simply figure out how to make them fit. So for now it’s better to chalk the struggles up as early season woes that will disappear as the team develops its chemistry and everyone gets accustomed to their roles.

As long as the wins keep on coming, let’s enjoy the unique entertainment that only early season chaos can provide for a while longer.

Next game: Vs. Trail Blazers on Monday

The Blazers will visit San Antonio on a SEGABABA on Monday, after playing the Mavericks. Hopefully the Spurs will be able to use their depth to their advantage to remain undefeated.