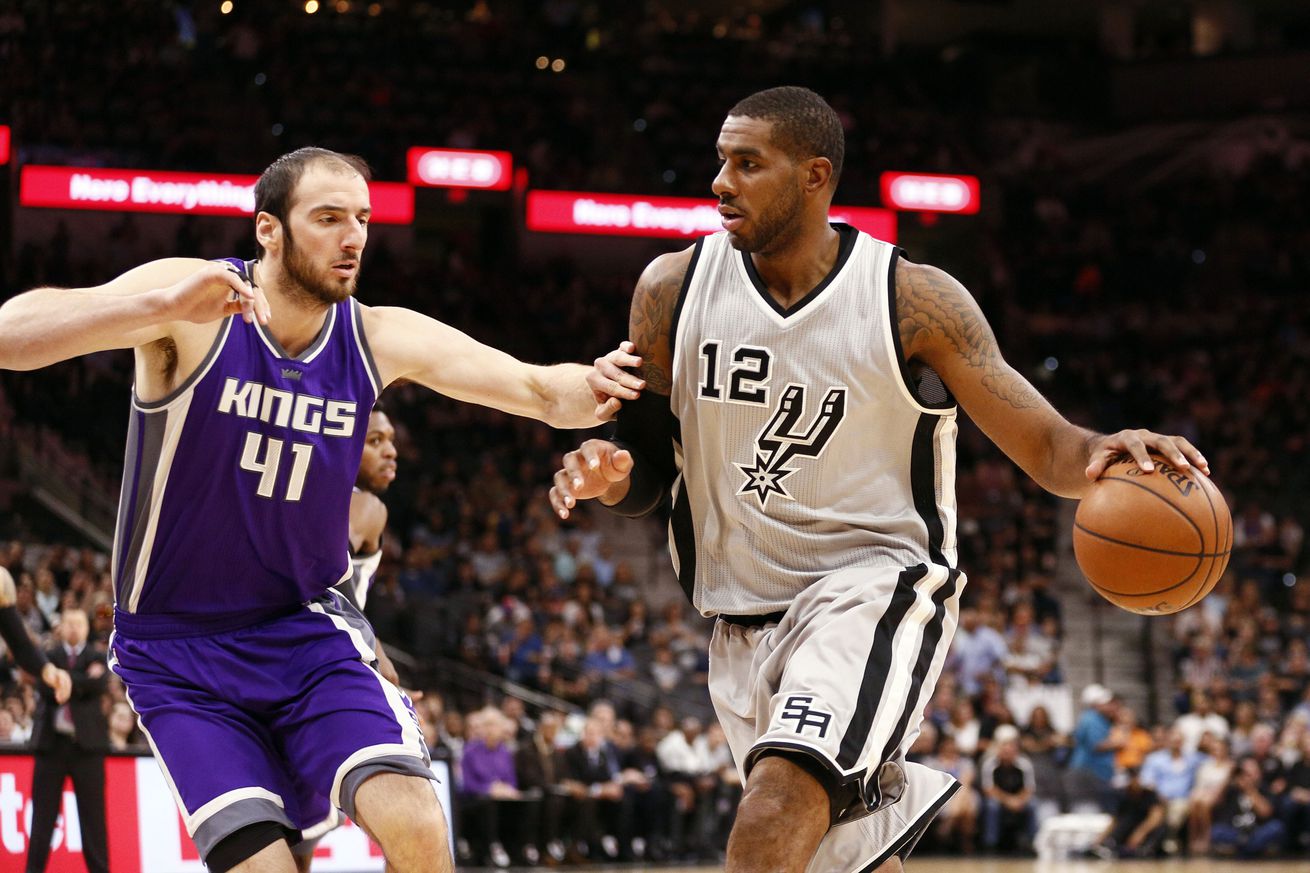 The last time these teams met the Spurs had to dig themselves out of a 28-point hole to notch a W. Not so much on Sunday night.

Gregg Popovich decided to shake up the starting lineup, presumably to get the offense going early but that didn’t work out too well for San Antonio as the Sacramento Kings scored the first nine points of the game. Extraneous G inserted Davis Bertans at the four and moved LaMarcus Aldridge to center while Dewayne Dedmon moved back to the bench.

Aldridge scored the first points for the Spurs on a putback to make it 9-2 before the Kings dropped five more on the Spurs. Down twelve was enough for Gregg Popovich, who put the game on pause. The Spurs missed 12 of their first 13 shots while the Kings were on fire, hitting seven of their first 10.

A 9-0 run got the good guys back in it at 16-13 and we had us a ballgame. At least for a few minutes. It was back and forth for the rest of the first quarter and the Kings took a 27-21 lead after 12 minutes. The Spurs became more aggressive on defense and their shots started to fall.

The second quarter belonged to the Spurs, who outscored Sacramento 37-22 and took a 58-49 lead into the half. Tony Parker was good for San Antonio, scoring 12 points (6-of-7) in the quarter and adding a nice assist to Kawhi for a triple along the way.

The game pretty quickly got out of hand for the Kings, with San Antonio going up 18 at 75-55 and the Spurs getting everything to go offensively. LaMarcus Aldridge was excellent, scoring 12 points in his eight minutes in the quarter and adding a couple boards and a steal.

Parker and Aldridge headed to the bench with four minutes left to play in the third, Kawhi Leonard would follow a minute later, and none of them would not return to the court with the game in hand. By the time the third quarter was over the Spurs held a commanding 25-point lead after outscoring the Kings 41-25 in the third on 70% shooting and 12 assists on their 16 buckets.

The fourth quarter was garbage time with Patty Mills and Pau Gasol doing the heavy offensive lifting for the Spurs before they hit the bench with nine and six minutes left to play, respectively. Davis Bertans, Bryn Forbes, Kyle Anderson, Joel Anthony and Jonathon Simmons finished the game out for the Spurs.

The final score is closer than this game was, the Spurs were up 24 as late as the two-and-a-half minute mark of the game. The Kings scored the last 10 points of the game and San Antonio was held scoreless for the last four minutes of the game.

The energy and focus was great for the Spurs in this one, a great sight to see for fans after dropping a pair of games including a loss in Memphis the previous night. In the end San Antonio did what they were supposed to do, beat a lottery-bound squad and righting their ship along the way.

Your Spurs improve to 53-16 and still trail the Warriors by two in the loss column for the one-seed, though the Spurs do own the tiebreaker should it come to that. The Spurs hold a six-game cushion over the Rockets.

Here’s a stat for my morning piece:

The Spurs get a night off before they take on the Minnesota Timberwolves on Tuesday night at the Target Center. You can catch that game at 8:30 CDT, aka STTOTTM, on Fox Sports Southwest or ESPN. Then it’s a four-game homestand with games every other day coming against the Grizzlies, Knicks, Cavaliers and their third and final game against the Warriors coming on Wednesday the 29th. It’s a good, tough schedule to end the season, one that will provide the Spurs with plenty of opportunities to tighten up and prepare to play their best ball when the playoffs roll around in just four weeks.

Just for fun, here’s the rest of the schedule with their opponent’s current winning percentage. Nine of the remaining teams have winning records and four have won 60% or more of their games. Note that the Spurs don’t have more than a day between any games and have two back-to-backs. Eight of thirteen remaining contests are at home, though.