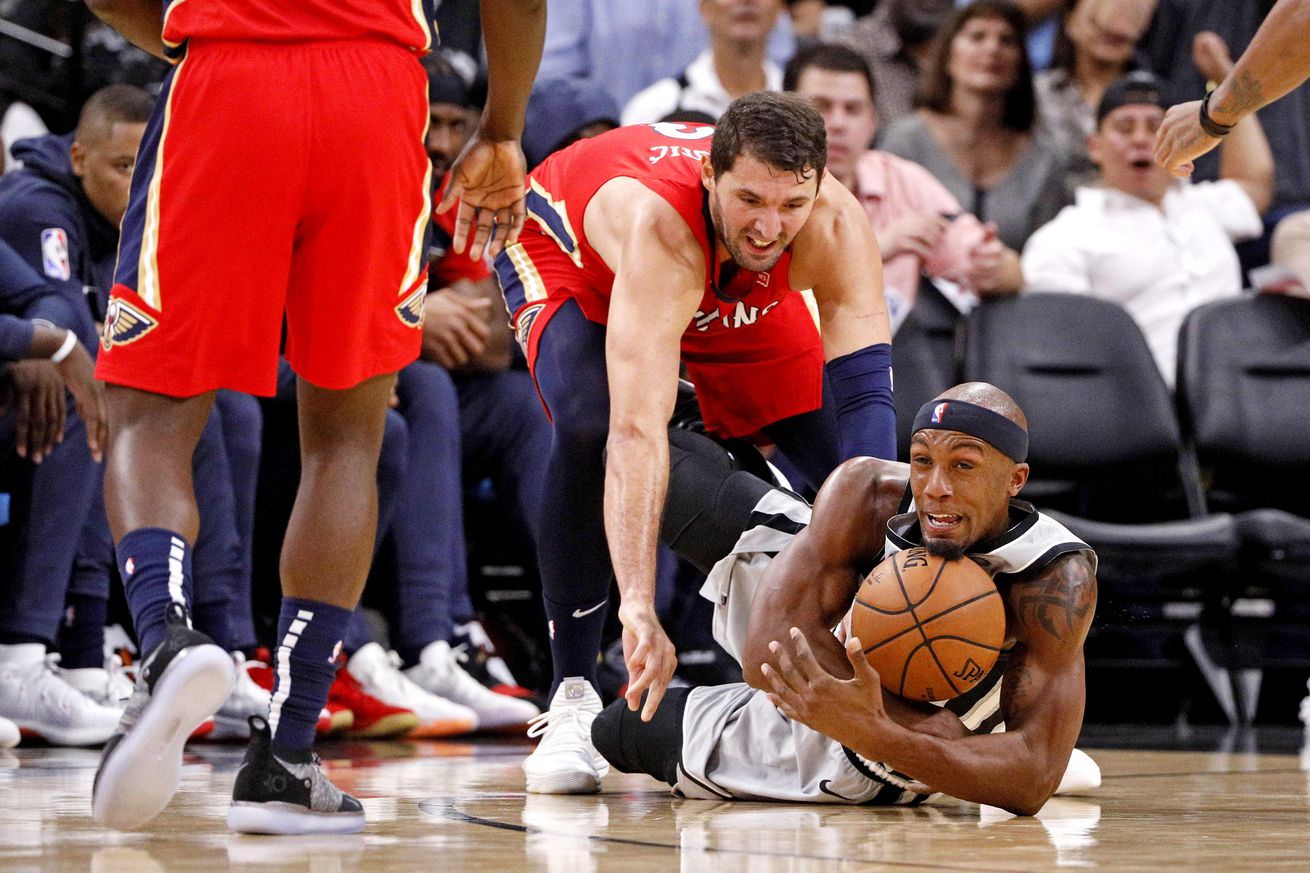 For the second straight game, the Spurs held an opponent to under 100. This time, it was against Anthony Davis and the third-ranked Pelicans offense.

The range of skillsets in the NBA has always made it more chess than checkers, players serving as distinctly effective pawns, bishops, and knights rather than uniform pieces on a grid.

It’s a somewhat limited metaphor as it applies to ten super-athletes trying to put a ball through a hoop, but the Spurs’ 14-point win over the Pelicans did have a few more analogues to offer, whether it was watching Julius Randle relentlessly make the same rook-like B-lines towards the basket (and typically into the outstretched arms of Pau Gasol), or DeMar DeRozan using shifty, L-shaped routes to his preferred shooting spots.

In this sense, the supremely talented Anthony Davis operates more like a queen, fluidly stepping back into jumpers with LaMarcus Aldridge’s hand in his face, thwarting pick and rolls and taking the ball coast to coast, and, in a rare, mortal moment in the first half, catching an errant shoulder to the face only to immediately collect himself in time for a weakside block on Dante Cunningham. There are few spots on the floor he can’t make an impact, and few things he can’t do on any given night.

And yet the steadily improving Spurs defense was up to the task, holding Davis to just 17 points on 38.5% shooting and, more importantly, containing the league’s third-ranked offense (New Orleans came in averaging 114.3 points per 100 possessions) to 95 points. Even with this being the Pels’ fifth straight loss, passing a test against a dynamic offense and elite talent can only be a positive thing.

When considering the team’s success against the Brow, it helps to start with this figure: 39:41. That’s how long LaMarcus Aldridge saw the floor, which just so happened to mirror Davis’ game time. The two were joined at the hip all night, which certainly seemed to be a part of Gregg Popovich’s gameplan. Here’s what he said about the matchup afterward:

The box score might give the edge to the Spurs big man (22 points, 12 rebounds, 6 assists) this time around. Aldridge’s adaptability versus different styles of opponents is always something to appreciate; like an inside-fighter in boxing, he used his size to nullify Davis’ length, consistently wresting position on post-ups and rebounds with his lower center of gravity. By working him on both ends of the floor, a visibly gassed Davis (who’s also been battling an elbow injury) struggled to take control of the game as many are used to seeing.

For the Spurs, it was the second game in a row they held an opponent to under 100. Don’t look now, but the team that was 29th in defensive rating not long ago now ranks a more palatable 16th, complementing an offense that’s still hanging in at 10th. Even better: over the past four games, no team has posted a better defensive rating than their 95.2 points per 100 possessions.

A big reason for this has been the uptick in minutes for journeyman Dante Cunningham, who got his fifth start of the season on Saturday, playing a season-high 38 minutes against his former team. With Cunningham sliding into either forward spot on the floor, the Spurs are playing like a top-five defense, holding opponents to a good-for-a-2018-NBA-team 102.3 rating. Patty Mills, who put in an all-around excellent game with 15 points, 8 rebounds, and 7 assists, spoke to the identity Cunningham is helping restore in San Antonio after a shaky start:

“I just think the grit and the nasty that we’re developing defensively is good,” he said. “We’ve got some guys like Dante Cunningham coming in physically and using his body and diving on loose balls and really getting after it energy-wise, which everyone feeds off of. It’s really good to have.”

Pop had similar things to say after the win:

“So far, Dante has been — not exactly a surprise, but we didn’t expect him to be playing all these minutes. He’s taken advantage of the opportunity, I think he’s been really good for us. He sets the tone for us defensively. LaMarcus does under the bucket, and Dante’s picking up people that are really good shooters or good one-on-one players, and he’s done a great job. I’m sure he wasn’t expecting to play all these minutes either, but he’s been an important piece to these wins.”

Beyond his defensive contributions (7 boards, 2 blocks, 1 steal), Cunningham reminded fans he’s no slouch on the other end of the floor, hitting 3 of 5 shots from deep, making intuitive cuts to the basket, and scoring a season-high 15 points in total. That kind of balance is always great, but especially at a position where the Spurs are considerably thin.

“I’ve always been kind of that guy that coaches get and figure out where you put him,” he said, not entirely surprised to find himself in a position to be a difference-maker on a new team. “I just keep my head down and do what I can and what I’m supposed to do.”

With an essential set of skills and quintessentially Spursy attitude, Cunningham is proving to be one of the savvier offseason pickups for any team thus far, not to mention an important piece to the puzzle Pop is looking to solve.

Pop and DeMar, remaining grounded with the team’s improvement

Pop: “Well, I’m not of the mind that it’s come together yet. It takes a while, but they are doing everything they can to learn it, and I couldn’t ask for more as far as people allowing us to coach them.”

DeRozan: “It’s coming along. You know, we just preach consistency. The coaching staff and Pop stay on us everyday about the same thing. So we keep in mind every time we go out there to be better defensively, and it’s kind of showing.”

Make that four wins now for San Antonio, who improves to 6-2, with seven of those eight games coming against teams many consider playoff-caliber teams. Banking these Ws early while figuring everything else out is huge.

New Orleans meanwhile, has lost five straight after winning its first four. Davis’ injury issues have certainly contributed to that, but the Pelicans are going to want to turn things around soon, lest they keep hemorrhaging games in a competitive Western Conference.

A quiet night for Rudy Gay

Gay was limited to 19 minutes of action and, according to Project Spurs’ Paul Garcia, could be seen heading to the locker room at one point with some of the team’s training staff. Nothing notable seemed to happen while he was on the floor, but it’s nonetheless something to keep an eye on with a SEGABABA on Sunday versus the Magic.

Marco continues to be a plus-minus maven

Belinelli and Mills combined to give the Spurs a huge spark off the bench, moving tirelessly off the ball and providing firepower from deep. Belinelli had the slightly better net rating, and continues to lead the team in that category on the season.