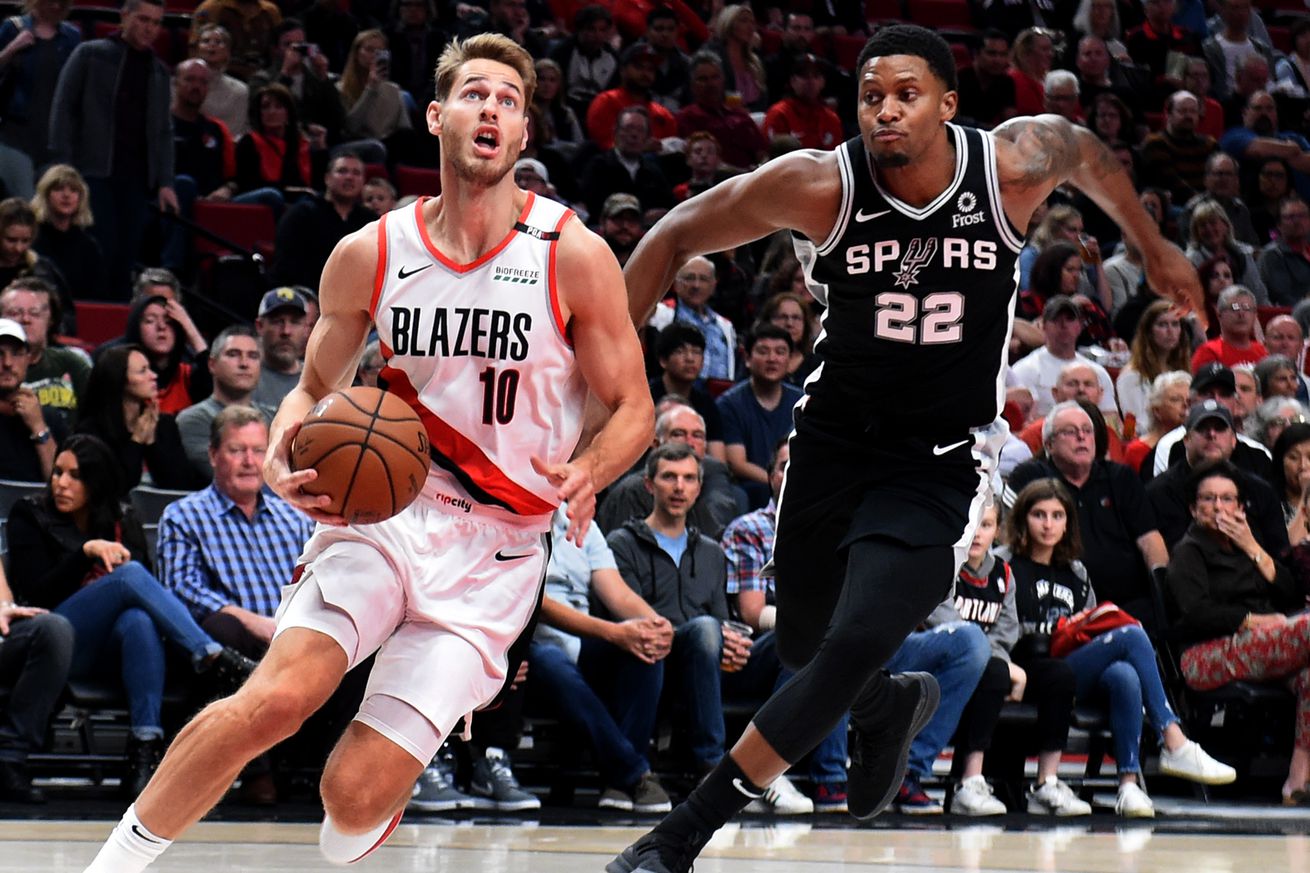 The duo of Damian Lillard and C.J. McCollum were too much for the Spurs’ shaky perimeter defense.

The Spurs struggled on defense but managed to escape with a win nonetheless on their season opener. In their first away game, they weren’t so lucky.

The Trail Blazers exposed San Antonio’s lack of quality perimeter defenders in a 121-108 win in Portland. Damian Lillard and C.J. McCollum led the way for the home team, combining for 53 points. DeMar DeRozan had 28 in the losing effort.

The game was a clash of styles that started out as expected. The Spurs tried to take advantage of mismatches inside, posting up LaMarcus Aldridge and DeMar DeRozan while the Blazers tested San Antonio’s perimeter defense with drives by their guards. Both strategies worked, as neither team could contain the other’s primary weapon without sending help, but neither squad was sharp enough to take advantage of the resulting breakdowns early on. The result was a low-scoring first quarter that ended up tied at 22.

Neither team counts depth as a strength, so it’s not surprising that the second units failed to break the parity. The big guns were going to have to step up to create separation, and they did. Unfortunately for the Spurs, it was the Blazers’ stars that answered the call first. Damian Lillard and C.J. McCollum scored or assisted on 17 of Portland’s last 20 points of the first half, getting whatever they wanted against a defense that looked outmatched. It was exactly the type of push the Blazers needed to get their offense jump started an go into the break with a nine-point lead.

More of the same followed to start the second half. Lillard and McCollum continued to break lose and connect on outside shots. The gap widened, reaching 15 points at one point in the third quarter. The Spurs tried to answer, with DeMar DeRozan leading the way, to no avail. With Aldridge hampered by double teams, San Antonio lacked the offensive punch to make a serious run. There would be no comeback, as the Blazers managed their lead until Pop pulled the plug and emptied his bench down 18, with 3:28 to go in the fourth following a Zach Collins three-pointer.

This is not a surprising loss. Teams with explosive backcourts will cause the Spurs all kinds of trouble, likely even after Derrick White’s return. On the other end, opponents will focus a lot of attention on Aldridge and force the Spurs to get their points from the perimeter, where they lack firepower. That’s the blueprint to beating San Antonio and this season, against quality opposition like Portland, it will work at least for stretches.

The challenge then will be to stay avoid the mistakes that turn a small run into a big one and stay within reach even when the opponent is playing better. There’s no easy fix to the Spurs’ weakness, but better execution could go a long way into masking them. On Saturday, the discipline wasn’t there and a game that could have been close turned into a blowout loss. Let’s hope that doesn’t happen too often going forward.

Up next: @Lakers on Monday

The Spurs will travel to Los Angeles to face LeBron and the Lakers. Expect Rajon Rondo and Brandon Ingram to be suspended after their fight with the Rockets. It will be a good opportunity for the Spurs to get a road win against a similarly shorthanded direct opponent.

For the opponent’s perspective, visit our friends over at Blazer’s Edge.