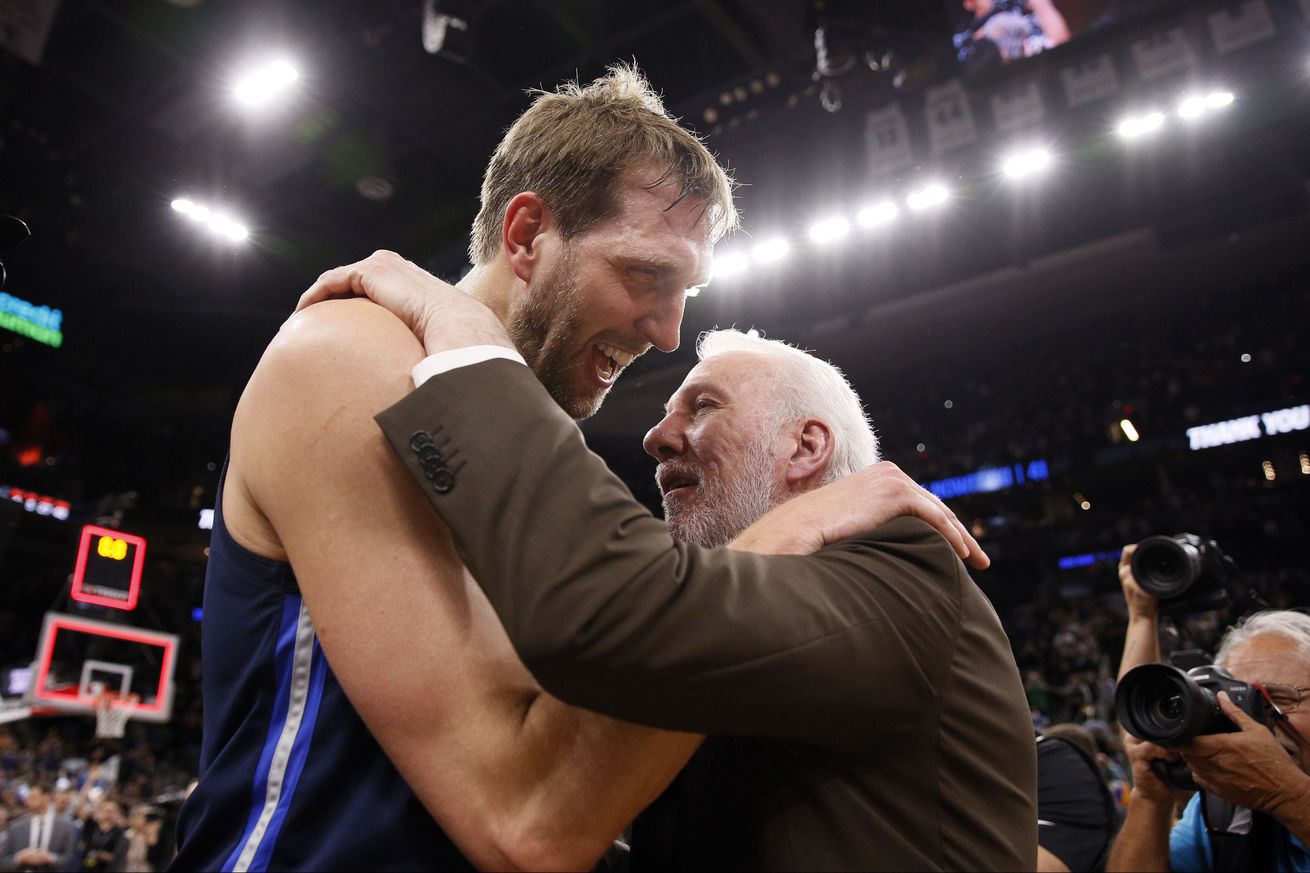 The Spurs gave their longtime rival a worthy sendoff, and got a much-needed win in the process.

For the second time in two weeks, Gregg Popovich took pregame questions from atop a small platform rather than in his usual scrum, obligingly hunched over a mic as he tried to distill the qualities of an NBA great to an international group of seated reporters. Even regular-season basketball can occasionally get too big for its main stage, and nights dedicated to the Manus and Dirks of the league force some unlikely characters to play narrator at times.

From the pregame pageantry — which included a touching tribute to the retiring Dirk Nowitzki — to the host of blue-clad Mavs fans and Dirk supporters in the crowd, to the playoff intrigue that lingered until past midnight, San Antonio’s 104-95 win over Dallas was a reminder of the various contexts that overlap a game. Pop has an appreciation for this, to be sure, but he’s also quick to ground things when the questioning veers toward playoff speculation or too far away from actual basketball.

“This is a big game for us,” he has to remind one reporter when asked how he might use the night to provide rest for his stars. “We want to win the game. Everybody’s still jockeying for playoff position.”

How might he balance paying tribute to his competitor while keeping his team focused on the win?

“You do both,” he says. “I don’t know how to answer that question. You just do.”

If part of the latter question related to taking it easy on the veteran, those concerns were quickly cast aside once the game began. Much like they did through most of their rivalry, the Spurs weren’t shy about throwing double teams Dirk’s way. And much like he’s done all these years, Dirk routinely found the open man or scores anyway, each bucket leading to a slightly louder roar from the AT&T Center crowd. He finished the night with 20 points and 10 rebounds, just north of his career averages of 19 and 8 against San Antonio.

But, at 40, Dirk doesn’t make this look easy. Not the moving part, at least. And of all the praise that Rick Carlisle effused in his 18-minute pregame talk while simultaneously trying to stifle the emotions that attempt to flow out with it, it was him talking about what it took to keep that 7-foot-frame animated that fascinated me the most. The Mavs coach noted the judicious distribution of playing time at the end of his 21-year playing career, as well as the support from teammates and upkeep that, in the end, included “needles, acupuncture and electrical stim” to help Dirk manage pain, but it all came back to an unwavering will to compete.

Pop, too, speaks warmly about what he thinks young people could best learn from his longtime rival — “His professionalism… the way he went about his work, how he handled himself during games and after games… there are many examples of his professionalism that would be a great example for anybody who wants to do anything in their lives, whether it’s basketball or playing the violin or being a computer scientist.” — extols Dirk’s impact on the game — “He was one of those guys that had to be dealt with because we’d never really seen anything like that — somebody that’s 7 feet tall and out on the court shooting the shots he shot. He made everybody change, and the league had to respond, because guarding him was different than guarding anybody else at that size.” — and reminisces about the series-winning and-one he scored in 2006: “That was a great moment for him,” he said to a round of laughter. “I think he got touched with a feather when they called the damn thing — and he knows it, too!”

Ultimately, both sides went home smiling. Dirk, competing in NBA game 1677 of 1677, made the final shot attempt of his career with under a minute to go, completing one last vintage performance that drew an enduring rain of applause. For Pop and the 2018-19 Spurs, it was game 82 of X, with a result that lent further hope for what’s around the corner.

The man who so often put the Spurs on his back did so once more on Wednesday, pacing his team with 34 points (on 15 of 21 from the field) and 16 rebounds. He finished the season with new career highs in blocks per game (1.3) and field-goal percentage (51.9%), while his rebounds (9.2) and assists (2.4) were the best averages he’s posted in San Antonio.

“It’s kind of fitting in one way and it’s kind of odd in another. But there’s a lot of history here with this rivalry and Dirk, and Dirk’s been a big part of it. I know Pop has an enormous amount of respect for Dirk the person and Dirk the player.”

Once the win was secured and a first-round matchup versus the Warriors averted, all sights were set on the various other games that would determine the Spurs’ fate. While it was looking like it would be Houston with the Nuggets trailing the short-handed Wolves at home late, a Denver rally set the table for what is likely a more favorable first-round series for San Antonio.