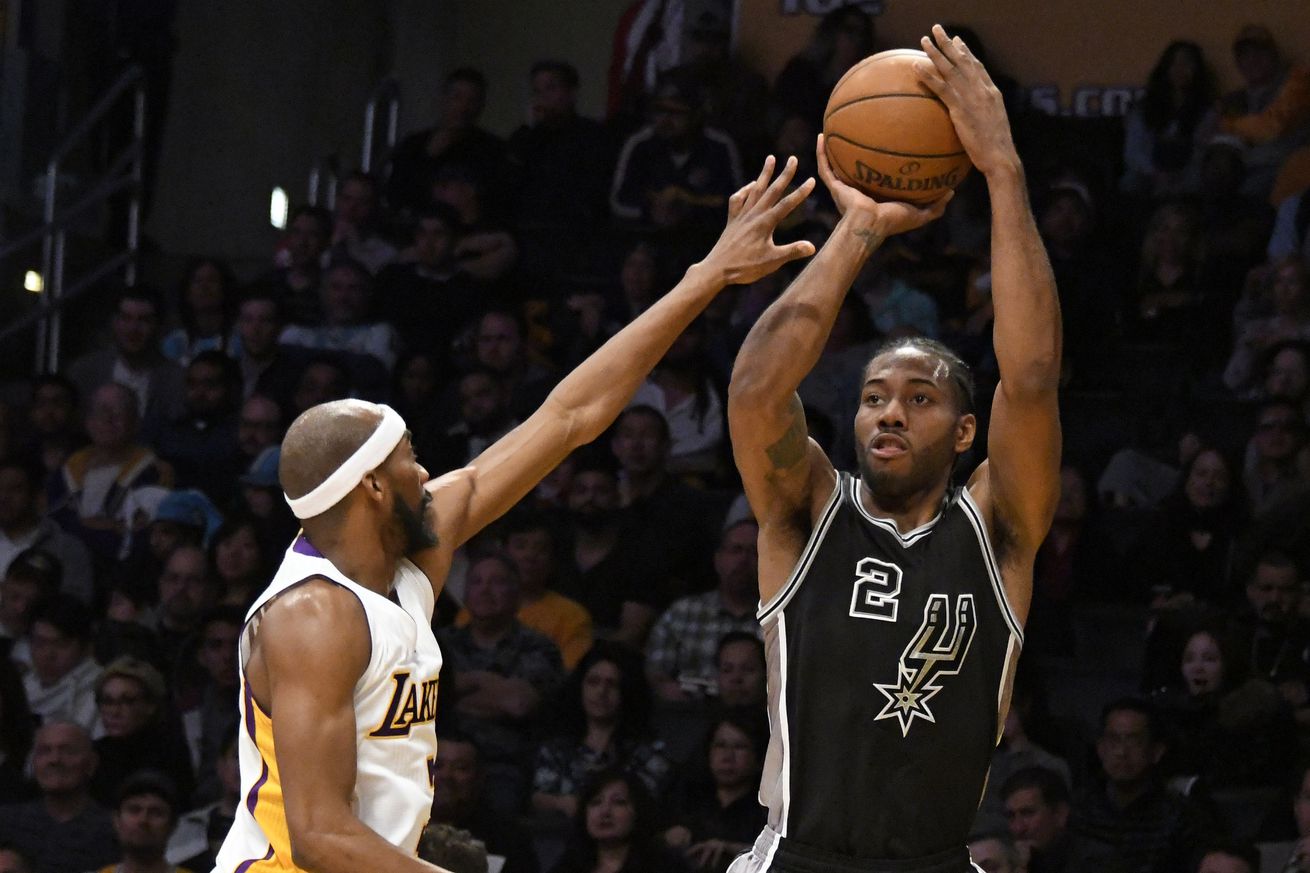 The outcome was never in doubt after Kawhi Leonard scored 16 points in the first quarter as the Spurs easily defeated the Lakers.

Sometimes these afternoon games can be a little scary, because the Spurs sometimes just don’t play very well in the daytime. Maybe that little run in that Manu Ginobili had with a bat was more of a big deal than the team is letting on. But today, against what seems to be an obviously tanking Lakers squad, the Spurs, led by a strong start from Kawhi Leonard and DeWayne Dedmon, had no problem putting the game away early and giving plenty of time to their young players late to show off their stuff.

The Spurs started off quick with a Tony Parker feed to Dedmon for a thundering dunk to put the Silver and Black up by two. Then LaMarcus Aldridge got into the action with a drive to the bucket for an easy dunk. Julius Randle was holding down the interior defense and tried hard to make it a game for the Purple and Gold, but KAWOW! went off and the Lakers had no answer. Late in the quarter, Pau Gasol entered the game for Dedmon and showed that the aftereffects of a broken hand weren’t a problem for his three point shot: he quickly sunk two of them. The Spurs led 34-18 after one quarter and the rout was on.

The second was a whole lot more respectable for the Lakers as they got some hot shooting from San Antonio native Jordan Clarkson. But the Los Angeles defense was carved up by Tony Parker driving the lane and Dewayne Dedmon continued to dominate the LA bigs inside. The Lakers also got Corey Brewer to hit shots for them, which is something he couldn’t do for the Rockets. Nevertheless, the Spurs extended their lead and led 61-41 after two.

The Spurs looked a little bored early in the third quarter as their offensive movement seemed to stagnate, and Kawhi got overcome with the spirit of Kobe Bryant and took some ill-advised shots from beyond the arc without even looking for a teammate to pass the ball to. There were other bloopers, including a missed dunk from Danny Green, but Kyle Anderson came in and stabilized things a bit. The Spurs, despite not playing that well, outplayed the Lakers for the quarter and led 96-70 after three.

The fourth quarter was extended garbage time, but Spurs fans were able to get extended looks at some of the talented guys on the Spurs roster who rarely get on the court. Dejounte Murray had a good stretch. Despite being the only Spur not to score a point, he was able to run the offense and had 4 assists. Thomas Robinson and Brandon Ingram took advantage of the Spurs lackadaisical defense to show off their athleticism and the Lakers outscored the Spurs 28-23 in the quarter. I’m sure that was something that Pop wasn’t too happy about, but it really didn’t matter as the Spurs won easily 119-98. Even Pop was putting the brakes on the Spurs late in the game.

Lee to Murray to Simm– it’s a case of Alleyoopis Interruptus: Pop stands up and yells for them to put the brakes on pic.twitter.com/uyJnvKmyjn

Much of this game seemed to be pretty slow and didn’t really go anywhere. Kind of like this song.

This game finishes off the Rodeo Road Trip, which was pretty successful for the Silver and Black, as they went 6-2 on the trip and won the last 4 games. The last two games against the Clippers and Lakers gave the Spurs a rare treat—two consecutive road games without having to travel. But that didn’t impress Gregg Popovich, who will be glad to leave the tender trap of Los Angeles, with all of the good food and drink.

The Spurs play again on Wednesday night 7:30 pm at the AT&T Center against the Indiana Pacers who they beat on Valentine’s Day at their place. It should be fun to see Paul George and Myles Turner compete against the good guys at home.