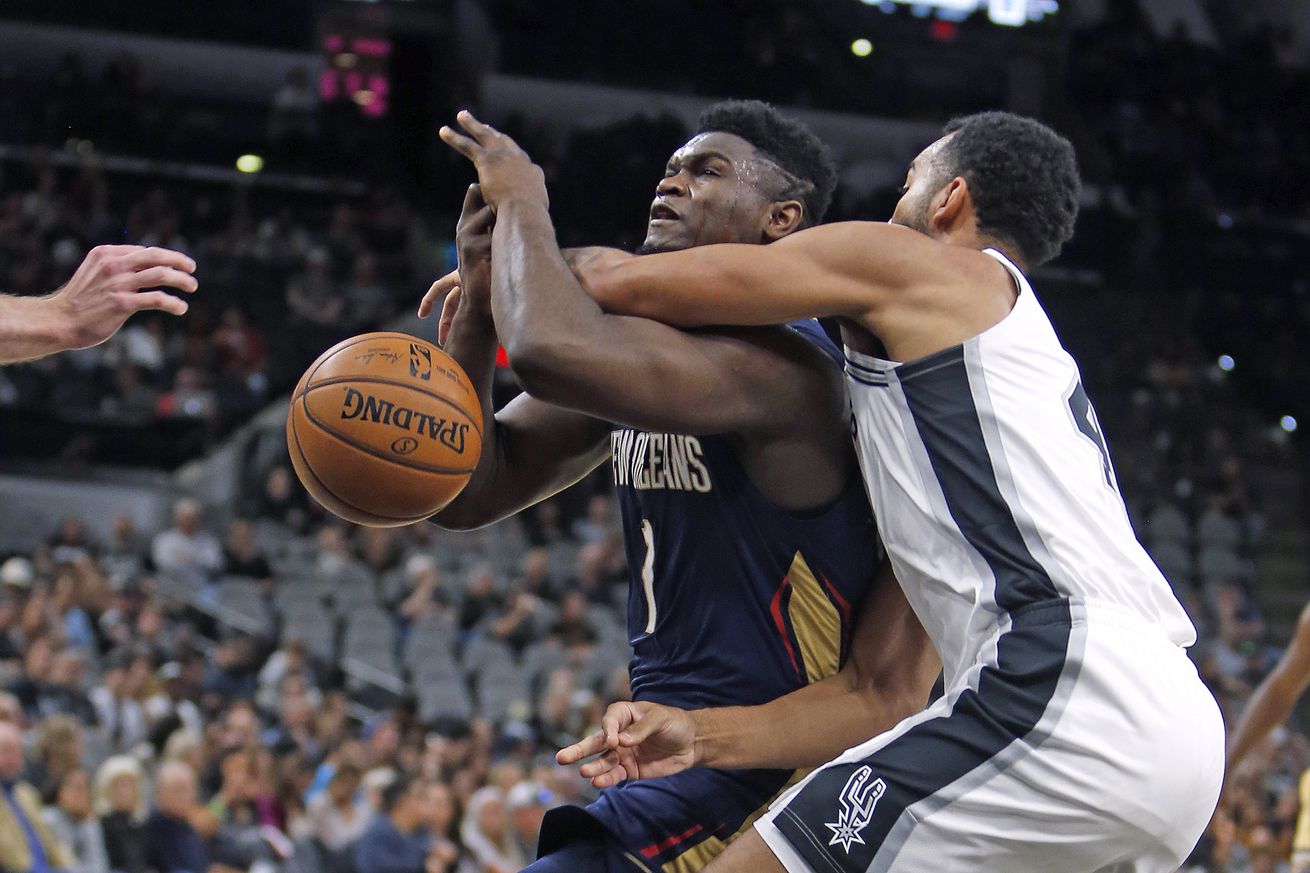 Spurs center Jakob Poeltl couldn’t say at what point in his team’s 123-114 preseason loss to the Pelicans he picked up the two large scratches he sported during his post-game availability. Instead the welts, which went from his collarbone to somewhere beneath his jersey, served as a symbol of the constant contact he’d subjected his body to in 20 minutes of play, mostly with first overall pick Zion Williamson.

At some point this season one of the shared experiences of rival fanbases will be the perpetual unease for Williamson’s next downhill drive, which is like watching Bowser with a star power-up in Mario Kart or, as in Bryn Forbes’ less nerdy terms, “a defensive end that can jump.” It’s an illogical combination of size and body control that makes something inevitable so difficult to stop, and seeing it in person made one wonder if LaMarcus Aldridge’s night off (he and Rudy Gay were both DNP-Rests) was something of a business decision.

“It was tough,” said Poeltl about guarding the Pelicans rookie. “He’s definitely a good player… very athletic, very strong. He’s gonna keep attacking the rim. I think it’s gonna get easier once we see him a little bit more, scouting him a bit more, but he’s definitely a good player…. He has a good feel for the game, as well. He’s finding his teammates, he’s attacking strong. You don’t see it everyday.”

Poeltl, to his credit, did an admirable job using his height advantage to contain Williamson — especially in the 1st quarter, which the Spurs won 27 to 16. On one possession, Zion took a power dribble to his left and tried to create some space by leaning into Poeltl with his right shoulder, only for the San Antonio big to recover, block the shot and collect the rebound. Williamson finished with a game-high 22 points and 10 rebounds.

Even in a meaningless game self-preservation felt like an underlying theme, whether it was watching Spurs defenders bounce off Williamson, DeMar DeRozan drop to the floor after taking a shot to the midsection (Pop said he may have had the wind knocked out of him), or simply ruminate on the division rival’s impressive act of rebirth last summer in offloading disgruntled superstar Anthony Davis. It was also something that new Spur DeMarre Carroll touched on in his post-game scrum, both in a literal sense (he stressed the importance of “staying healthy” for himself and for Dejounte Murray) and in how he’s adapted his skillset through 10 years in the NBA.

“[Shooting threes] is something I built over the course [of my career]. I had a bunch of shooters as my coach and teammates. Jeff Hornacek was one when I was in Utah, Kyle Korver really helped when I was in Atlanta. Even in Brooklyn Joe Harris helped me a little bit. So, it’s just trying to better myself. I knew that’s something I needed to improve in order to stick around in this league and that’s what I do.”

Carroll had a nice outing on Sunday in 21 minutes, dropping 13 points on 4-of-8 shooting from the field and showing off that very welcome three-point range by hitting 3 of 4 from beyond the arc. If his fit in San Antonio appears seamless early on, it’s due in part to his appreciably professional approach to playing in the league, as well as his experience with nuclear members of the Popovich coaching and executive tree.

“There’s a lot of things that go into playing Spurs basketball,” he said. “I expected it — being over there with Coach Mike Budenhozler in Atlanta, I got a sample. Even with Sean Marks in Brooklyn. So at the end of the day, it’s a home away from home.”

Carroll’s right about the multitudes that comprise Spurs basketball: role players like him must fundamentally evolve out of a sense of career survival, while featured players like Aldridge and DeRozan function as basketball dinosaurs thriving in San Antonio’s Land Before Time; the team will try to leverage the continuity it’s rolling back while fitting familiar pieces into new roles. It’s the balancing act that Pop will look to perform as he turns the losses in preseason into lessons for the regular season.

“It’s always one on every team,” Carroll said of Forbes. “Always one guy who can shoot, make it look effortless.”