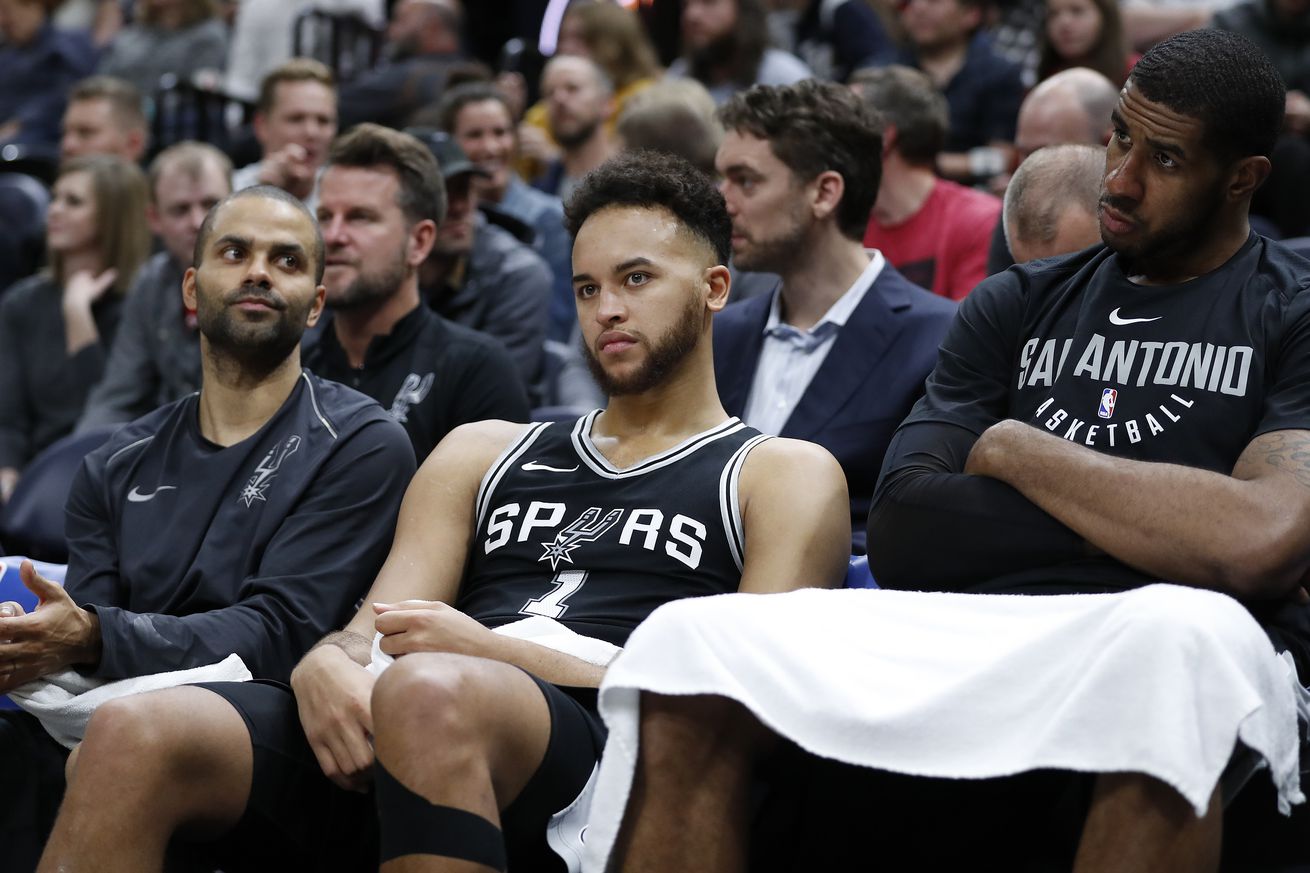 The Spurs road woes continue as the good guys played from behind all night against the Jazz.

Despite tonight being a SEGABABA, there was hope heading into the game that this would be the first game Gregg Popovich had a full roster to work with. Unfortunately that wasn’t the case as Pau Gasol and Danny Green both sat out with sore groins while Manu Ginobili was a DNP-CD after playing 26 minutes in Portland. Also playing their fifth game in seven nights with yet another new starting line-up (Bryn Forbes and Joffrey Lauvergne started in place of Green and Gasol), the Spurs looked tired and couldn’t keep up with the streaky Utah Jazz.

The Jazz were missing Rudy Gobert (knee) and rookie sensation/leading scorer Donovan Mitchell (toe), but it hardly mattered. Rodney Hood was unstoppable, roasting the Spurs from all over the court for 29 points. Four other Jazz players scored in double figures, and while the Spurs had six players score in double figures themselves, the leading scorer was Forbes with just 12 points.

Once again the Spurs seemed to forget they have a considerable size advantage against most teams, and tonight was no different despite no Gobert. For the second night in a row the Spurs struggled to find any kind of offensive rhythm; too many out-of-rhythm jump shots led to a poor first half showing as the Spurs found themselves down 50-38 at the half and once again playing from behind on the road.

They were better coming out of second half, moving the ball well and asserting themselves down low. They started the third quarter on an 11-1 run to get within two, but the Jazz would push the lead back to nine before the Spurs ended the quarter on a 13-6 run to get within two again, 72-70, thanks to three straight threes from Patty Mills and a slow-motion razzle-dazzle lay-up from Kyle Anderson at the buzzer.

For the second straight game, Kyle Anderson ends a quarter with a terrific play. This time he goes coast to coast for the reverse-under-the-basket-buzzer-beater. pic.twitter.com/4sERhxb3vg

However, as had been the case all night, the Jazz had an answer every time the Spurs got close. Utah opened on a 6-0 run to get the lead back to eight, and after Tony Parker got the Spurs back within one, Utah again responded with a 9-0 run. It didn’t help that LaMarcus Aldridge picked up his fifth foul early in the fourth quarter and had to sit for a while, only to foul out with just under three minutes left, and the Jazz would go on to win 100-89.

This was just one of those nights for the Spurs. That’s not uncommon for a tired, short-handed team away from home, but with 10 of their next 14 games coming on the road, the Spurs will have to fix whatever ails them and improve on their 7-9 record away from the AT&T Center if they don’t want to fall any further in the standings.

It’s kind of hard to give it to anyone in this game. Forbes might be the only other candidate with his team-high 12 points on 3-4 from beyond the arc, but Parker’s points came at a much more crucial time: in the fourth quarter with the Spurs nearly pulling even before the Jazz responded again. This was also with Parker playing season-high in minutes, so he gets extra recognition for that.

Kawhi Leonard played in the second half. It was only for a shade over five minutes, but it means his conditioning is improving and Pop feels like he’s healthy enough to play longer. As mentioned on the most recent In the Bonus, the Spurs won’t really take off until Kawhi is playing regular minutes and they aren’t having to adjust approaches by the half, and this was a step in that direction.

This is the second game in a row the Spurs had a made basket taken away on a wrong offensive goaltending call. To make matters worse, the refs took three minutes with 45 seconds left in a game that was already decided to determine if a Hood block of Dejounte Murray was defensive goaltending. They decided it wasn’t, which resulted in a jump ball that the Jazz won. Had they not called it, Rudy Gay was right there for the put back slam.

While neither call affected the outcome of this game, this is a situation the league needs to address. If the refs can review if a shot is worth two or three points at the next dead ball at any point in the game, why limit goal-tending to just the last two minutes and OT? I’d also love for them to find a better answer than a jump ball to a wrong goaltending call, but I can see why that’s difficult since they can’t judge what happens to the ball after the whistle.

The Spurs are headed to Sacramento to finish off a three-game road-trip against Kings on Saturday. Tip-off will be at 9:00 PM CT.