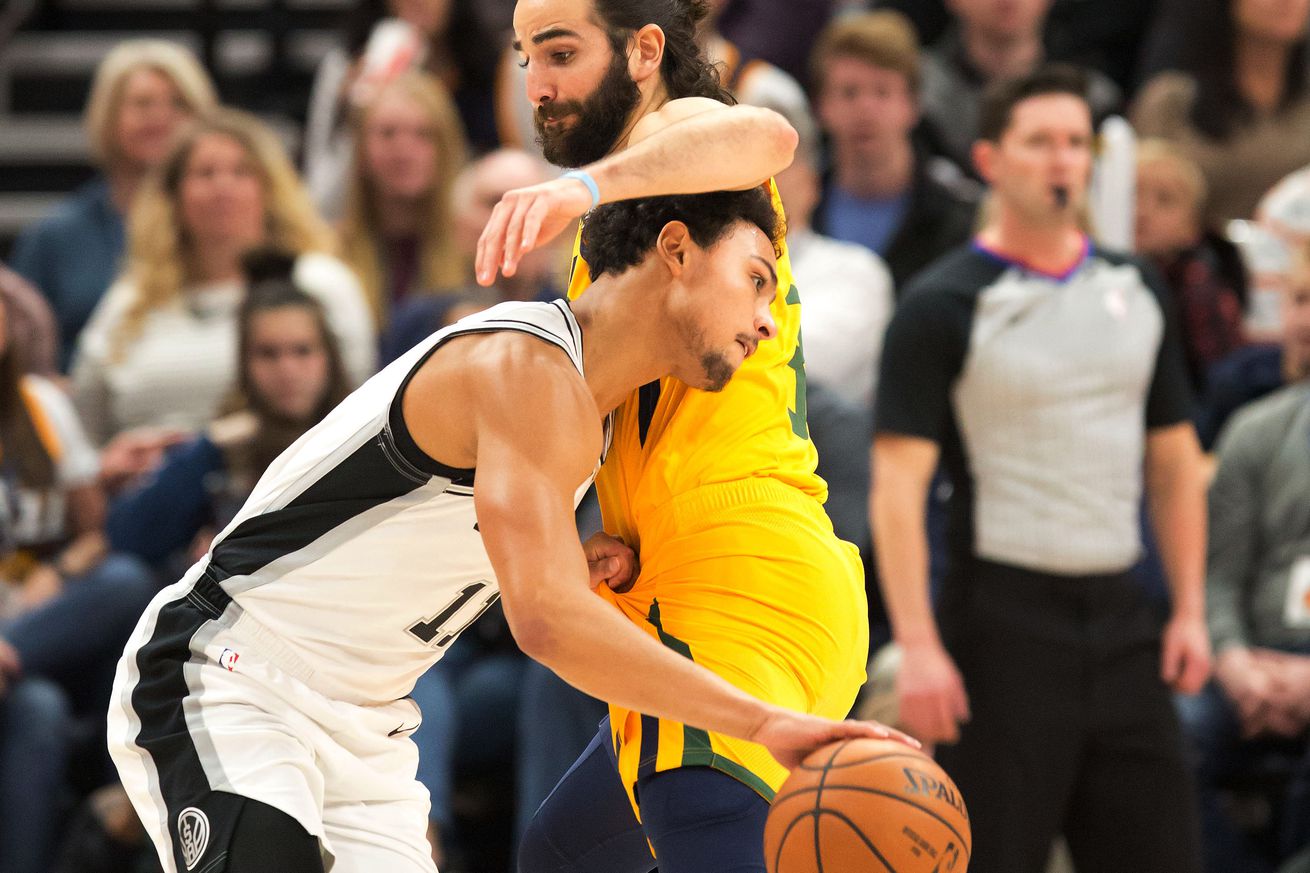 Nobody expected the Spurs to duplicate their blistering offensive performance against the Trail Blazers, but it still was a disappointment as the Spurs couldn’t put together any semblance of competent offense against the Utah Jazz tonight. As bad as that was, the defense was even worse, as the Spurs were slow on rotations and gave Joe Ingles and Donovan Mitchell wide open looks that the took advantage of, hitting more than half of their three point attempts. LaMarcus Aldridge and DeMar DeRozan took most of the second half off in the blowout, and there were a few bright spots for the Spurs as Jakob Poeltl looked good playing against Rudy Gobert and Chimezie Metu had a few nice plays in garbage time.

LaMarcus Aldridge opened up the scoring with a jumper, but Donovan Mitchell hit a triple and the Jazz were in the lead early. Mitchell stayed hot as the Jazz rushed out to an 8-4 lead. After another three from Joe Ingles and a dunk by Favors, the Jazz led 13-6 and Pop needed a timeout. The Jazz defense disrupted the Spurs, but Davis Bertans did his part with a deep triple and a nice cut to the basket to cut into the Jazz lead. Jae Crowder’s crazy three-point banker at the buzzer kept the Spurs at arm’s length, as they led 20-13 just past halfway through the quarter. It got worse, as Ricky Rubio was left open for an open triple. Kyle Korver extended the Utah lead to a baker’s dozen with under 3 minutes left. Patty Mills sacrificed his body by taking a charge on Mitchell, but it was called a block on the Aussie, to his obvious dismay. Donovan Mitchell finished off the scoring for the Jazz as they led 34-20 after the first 12 minutes.

DeRozan started out the second with a jumper, but even though the Spurs were able to pressure them on their possession, they were able to move the ball to Donovan who sunk a three. On their next possession, Korver got free and Belinelli submarined him as he released a corner three, and before you knew it, the Jazz had an 18 point lead two minutes into the quarter. The Spurs went on a quick 6-0 mini-run, but the Jazz fought back, taking advantage of Spurs to go on an 12-0 run of their own to lead 52-28 halfway through the quarter. Finally, the Spurs woke up and hit 9 points in a row to cut the lead to 15, capped by a steal from Rudy Gay for a Patty Mills fast break layup over Ricky Rubio’s outstretched fingers. As great as that was, the Jazz still had a 15 point lead. The Spurs played with a little more poise on offense, but the Jazz could get whatever they wanted on offense as they 63-47 at the half.

DeRozan used his size to get shots over Mitchell but the Spurs continued to give up the ball and they couldn’t use their advantage to cut into the deficit, in fact the Jazz extended their lead to 21 as Rudy Gobert dunked the ball over Bertans to lead 76-55 four minutes into the third. The Jazz were on fire from beyond the arc and the Spurs were a step slow on defense as the game began to get out of hand midway through the quarter, with the Jazz hitting almost every three point shot they looked at. Jakob Poeltl was the lone bright spot as he got free on the pick and roll for pretty scoring plays and even drew a charge on Gobert. But with the Jazz leading by 27 with 15 minutes left in the game, it was becoming very early garbage time. Chimezie Metu showed why the Spurs drafted him with a pretty jumper over Derrick Favors, but there wasn’t much else to see as the Jazz led 104-77 with a quarter to play.

Kyle Korver opened up the final quarter with target practice, hitting a deep three. LaMarcus and DeMar were on the bench, and they weren’t coming back, so the game belonged to the bench guys. Metu was making the most of his minutes, with an alley-oop dunk assisted by Quincy Pondexter leading to a Quin Snyder timeout, even though they led by 31. Georges Niang and Raul Neto had some good plays as the Jazz closed out the game on a strong note, winning 139-105.

Chicago is a band whose sound was heavily influenced by Jazz, and this song is about beginnings, which is something that Spurs fans can relate to this year. (H/T: andyprough)

The Spurs travel to Los Angeles for a matchup against LeBron James and the Lakers, who are currently the second-best basketball team that plays in Staples Center. It’s a late start, 9:30 PM CT, and it’s on ESPN, so get those DVRs ready. The Spurs play the Lakers again in San Antonio on Friday, and then the Jazz again on Sunday, so maybe they can figure it out by the weekend.