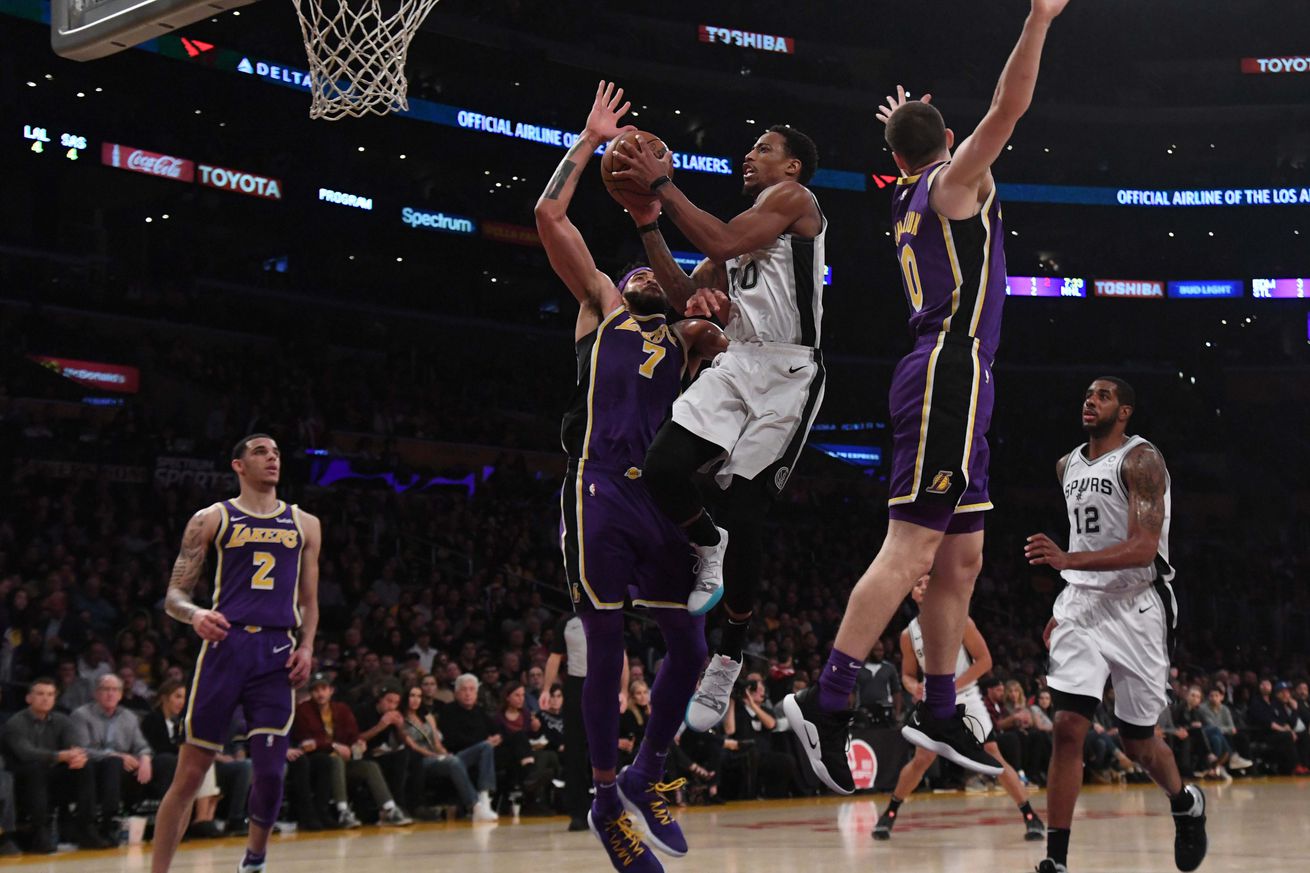 The Spurs simply refuse to meet expectations. After an encouraging 6-2 start, the team has gone just 5-12 since. They’ve lost to the Suns, who have the worst record in the league, and nearly knocked off the Bucks, one of the league’s best, on the second night of a back-to-back.

In a similar scenario – one night after playing the Jazz on the road – the Spurs found their focus and motivation, and almost took the season series from a surging Lakers team in Los Angeles.

It took a monster fourth quarter from LeBron James to seize control of the game, and at the end, the Spurs just didn’t quite have the legs to withstand his onslaught.

It didn’t start off well. With Dante Cunningham back in the starting line-up to guard LeBron, it looked like the offense was going to struggle. Fortunately, the defense was much more engaged right from the tip, and San Antonio was only down a couple when the offense started to come alive, but it did so with individual excellence, not team basketball.

The team’s starting five – Bryn Forbes, DeMar DeRozan, Dante, Rudy Gay and LaMarcus Aldridge – played 34 possessions together and recorded a grand total of one assist in that time.

The rest of the team continued their ball-moving ways, and staggering the team’s best players helped gave DeMar, Rudy, and LaMarcus their own opportunities to carry the load.

It was the first time all season all three scored over 20 points. Rudy, in particular, had an incredible night, putting up 31 points, the most he’s scored since February 1, 2016. Though it was a shame to waste that type of effort, the Spurs should strongly consider a similar rotation moving forward.

There’s still some room for improvement there, though, because the Lakers put together runs at the end of three of the four quarters, finishing the first and fourth particularly well. Some of that comes down to simple makes and misses. The Spurs, for instance, missed three good looks from the three-point line in the last two and a half minutes of the opening frame that would have helped offset the Lakers 9-0 run over that time.

The Lakers were able to close the gap at the end of the third for a different reason: Rudy had to take a break. He had completely owned the quarter, scoring 16 points and adding 6 rebounds and an assist over 9:08 of action. The Lakers put together a quick 8-2 run within 90 seconds after he sat down, nearly drawing the game even once again before the Spurs were able to right the ship.

The fourth, in contrast, belonged to LeBron, who put up 20 points in the quarter and seemed to be in complete control of the game down the stretch. The Spurs played better defense than they have in weeks, but sometimes it doesn’t matter how good the defense is with LeBron. He’s going to score anyway.

Up next: vs Lakers on Friday

Now begins the guessing game. Which Spurs team will show up for Friday’s rematch? Will the Spurs compete for 48 minutes and find themselves in a winnable game? Who knows? Tune in to find out.