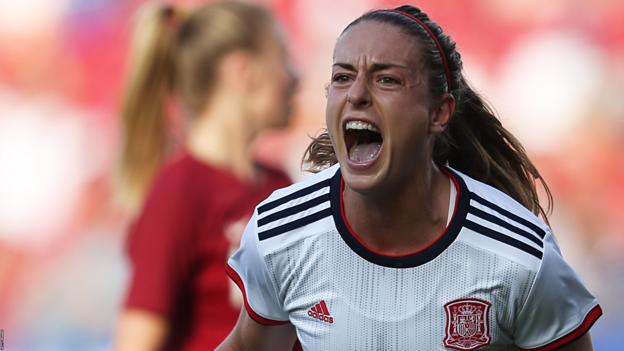 England’s recent struggles continued with a late loss to Spain in their final SheBelieves Cup match in Frisco, Texas.

It was their seventh defeat in 11 games and they have failed to defend their title in the United States.

Alexia Putellas scored the winner in the 83rd minute after she was left unmarked in the box to head home.

Spain had several chances in the second half as keeper Carly Telford denied Ainhoa Moraza and Marta Cardona from close range.

England were the better team before the break but despite chances for Ellen White and Nikita Parris, they failed to create many clear-cut opportunities.

The Lionesses have won just three matches since the World Cup quarter-final last summer and they will not meet up again until a training camp in April.

Phil Neville made eight changes to the side who narrowly beat Japan on Sunday – though some were enforced through injury.

Chelsea striker Bethany England and Birmingham City goalkeeper Hannah Hampton picked up “slight ankle strains” in training on Tuesday, where conditions were believed to have been relatively poor.

Teenager Lauren Hemp also missed out through illness, while captain Steph Houghton was left out of the starting XI to manage her minutes.

The USA were crowned SheBelieves Cup winners following their 3-1 win over Japan – their third victory in the tournament after they beat England and Spain without conceding a goal.

Megan Rapinoe, Christen Press and Lindsey Horan scored for the hosts, while Mana Iwabuchi got one back for Japan in the second half.

Neville has called for more “ruthlessness” from his side and said they are missing that one or two percent that world champions the USA have.

They had chances – Jordan Nobbs was once again busy in midfield, linking up with the front line and slipping White in on several occasions.

White could not quite time her run to keep onside in the first half, before she was beaten to the ball in the six-yard box by keeper Sandra Panos.

Parris was effective on the right too. She had several marauding runs and came close to setting up Duggan early on but her final ball could not find a teammate.

England prodded and poked at Spain’s defence in the first half but didn’t create enough and, if it had not been for Telford’s sharp saves, could have conceded two goals before Putellas’ winner.

In the end, their inability to provide a cutting edge in front of goal proved hugely costly and it will be a concern for Neville that England have scored just one goal in the competition.

Neville said on Monday he would know when to step away from the job after receiving criticism in the last eight months.

The performance in the first half was more encouraging but as the minutes wore on, England looked lost, without answers and struggled to come up with anything which really tested Spain.

Anything other than six points in this tournament would be deemed a disappointment said Neville this week.

England’s performances – and more importantly, their results – have massively underwhelmed in the United States and Neville says questions over whether he remains the right man for the job “should be asked”.

With the Olympics coming up in the summer and England’s only meet up before then being in April’s training camp, this defeat will leave a stinging feeling.

Where do they go from here? Are they in a position to challenge for the home Euros next year? These are the questions Neville will have to answer after the Olympics.

His players need to take accountability too. This team in San Francisco was more than experienced enough to beat a side ranked six places below them, with far fewer resources than the World Cup semi-finalists.

The majority of the England squad perform at a consistently high level with their clubs but Neville’s main problem remains that he has been unable to get the best out of them and that was demonstrated in the United States this month.

England manager Phil Neville: “I’m frustrated and a bit angry. In the last five minutes we showed some urgency for the first time in the second half. That second half was nowhere near good enough.

“We will be judged on results. I don’t think the results have been good enough and I take full responsibility for that.”

On whether he is the right man for the job: “The questions should be asked. I expect better of a team I put on the field. I’ll go away and reflect and I’ll take it from there.”

England captain Steph Houghton: “It’s frustrating. In periods of the game we were on top. We limited their chances and it’s disappointing for them to score from a set-piece. We wanted to end on a win but it wasn’t to be.

“Everyone has been quick to criticise us over last six months, we’re a new team with young players coming through. We’ve been together seven days and we have to keep the standards high. We’ll take some of the positives and look at negatives as well.

“We’re in it together. It’s not about the younger players or the older players it’s about us as a team. We’re really together and we have to be accountable for our performances, we’re just not getting the rub of the green at the moment.

“We have to get back to what we do best and that’s winning games for England.”

“That’s really disappointing from England. We thought they would push on but that never came.

“We never looked like scoring. It seemed like Spain put their main players on and were able to play at a higher intensity.

A lot of work needs to be done. There are some top teams above us, and I think we need to take a long hard look at ourselves and where we’re going. What happens if our key players aren’t in form? That’s what we need to be looking look at.”