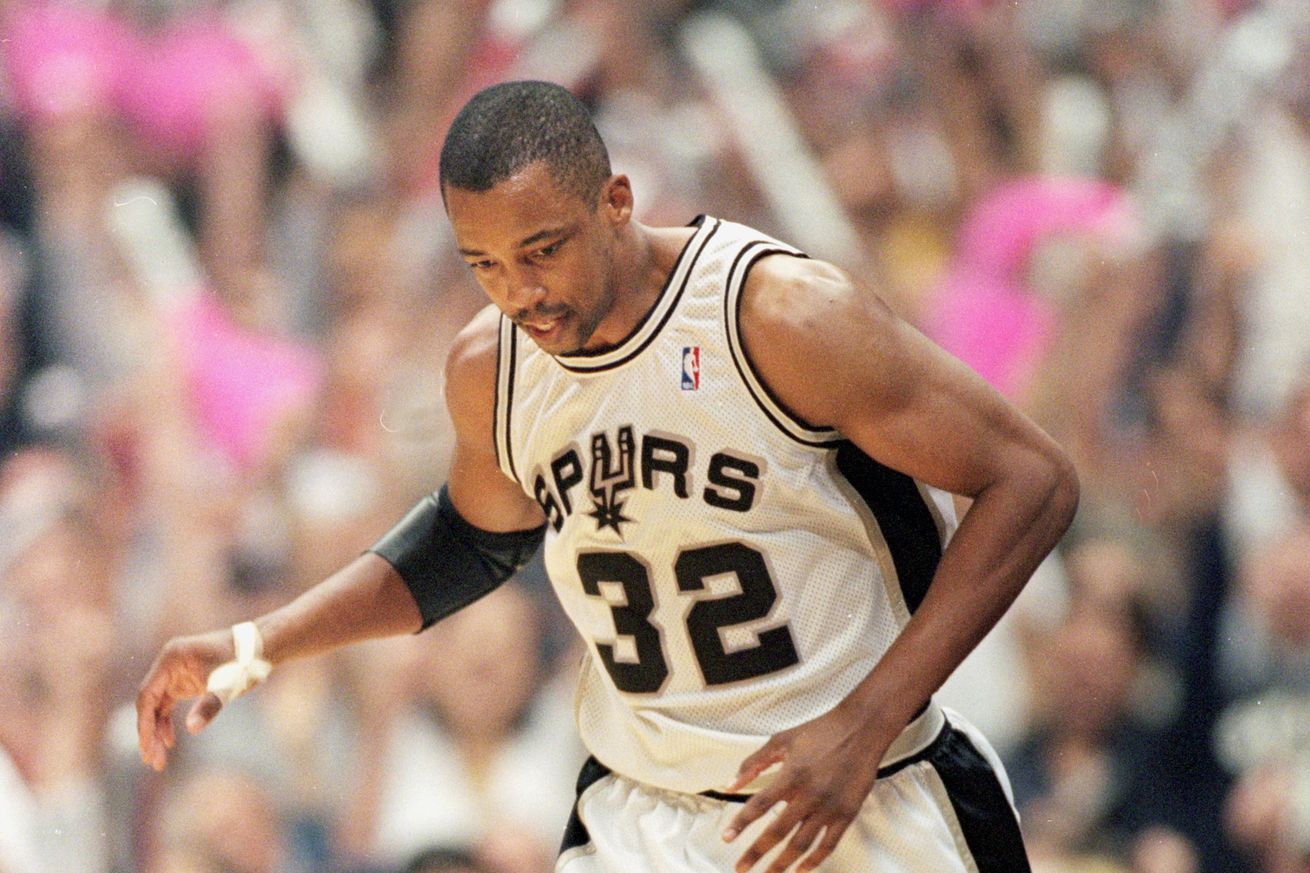 Few players have loved San Antonio more than the one who literally sacrificed an organ to bring a championship.

We are back with most Spursiest moves and skills of all time. Simply put these are the grittiest, most overlooked, and most singularly unflashy moves/skills in the San Antonio Canon. If you haven’t already, go back and check out our previous entries:

Today we are looking at a Spur whose underrated playing career ended long ago, but he still remains with the Spurs to this day because he can’t be torn away from the team, city and fans he loves most. Next up:

It is, however, not a phrase that one might readily associate with former Spurs player Sean Elliott, possessor of a .465/.375/.800 career shooting split, onetime breaker of Lew Alcindor’s career Pac-10 career scoring record and the tallier of more than 10,000 NBA points. After all, Elliott played Robin to David Robinson’s Batman throughout most of the 90’s, racking up as many All-Star appearances as Manu Ginobili (that’s a rant for another time), and a 20.0 ppg season in the process, so how exactly is that term supposed to fit the man?

If you’re asking that question, it’s probably because your understanding of the player we’re talking about is rooted largely in a Wikipedia summary and a Basketball Reference list of statistics, and as helpful as they might be, neither of those resources are really suited to properly explain the subtle phenomenon that was Sean Elliott. I myself was at a loss when it came to Elliott in my first years watching the Spurs. I simply couldn’t see what all the fuss was about. “He’s sooo boring!” I would complain, much to the chagrin of my grandmother (now an octogenarian, and still the very definition of a Spurs lifer), who would patiently reply, “Well you must not be watching very closely, he can be very exciting. But more importantly, he’s a very good teammate.”

A very good teammate indeed. In retrospect it’s not hard to understand why a ten-year-old would have difficulty appreciating the sheer versatility of a player like Elliott, who could score from any area of the court with relative ease, but rarely forced a shot outside the flow of the offense. More than anything, it was the relative diffidence that I couldn’t comprehend, the willingness to play sidekick. But what I and so many others failed to grasp was the thing that Sean Elliott has always seemed to understand: that San Antonio was the place that brought out the best in him, both as a player, and as a man.

What I didn’t know at the time, was that back in 1993, the Spurs powers-that-were had decided to concoct the kind of shake-up trade that the current iteration is loath to make. Concerned about Elliott’s kidney issues, and hoping to successfully pair David Robinson with the (talented) head-case that was Dennis Rodman (honestly, WHO thought that was good idea?), they shipped him to a ‘Bad Boys’ Detroit Pistons team and city that couldn’t have been more temperamentally unsuited for the player they were receiving. Elliott arrived in Detroit to find both a team and a fan-base seething (still to this day) over the loss of one of their beloved players, which not unsurprisingly led to the worst season since his rookie year, both environmentally and statistically.

“I was a relatively young basketball fan at the time, but Sean Elliott is one of the first times I remember a fan base hating one of their own players.” -Sean Corp (Detroit Bad Boys – SB Nation)

But, as fate would have it, a failed trade from Detroit to Houston and a year-long Rodman fiasco in San Antonio led to the trade that brought Elliott back to San Antonio, leading to one of the best seasons of his career, a team resurgence, and a narrow miss at making the NBA Finals. The subtext couldn’t have been clearer: The Spurs needed Elliott like Elliott needed the Spurs.

And so things continued as before, until the 1997 season, when a combination of bad luck and injuries led to the number one pick in that year’s draft, and one of the most talented big-men in recent history. Suddenly thrust from his former prominence into a more complementary role, Elliott could have taken it personally. Instead, he not only accepted the change of role, but embraced both it and the young jort-clad power forward, becoming one of his closest teammates in an on and off-court camaraderie that continues to this day. If it was Avery who taught Tim Duncan leadership, and Robinson who taught him humility, I don’t think it would be a stretch to insinuate that it was Sean who taught him how to be a great teammate.

And it’s in that moment that Sean Elliott’s true worth becomes most apparent. Like it or not, being a great teammate is a valuable skill, and even in San Antonio few players have matched Elliott in this regard; a man so genuine in his interactions and affections that he’s beloved by Spurs who never even had the chance to play with him. An individual who suffered through a multitude of injuries, regime changes, a heartbreaking trade (that nearly led to an early retirement) and a plethora of big-game losses only to endure it all and come out on the other side in hitting one of the biggest shots in San Antonio history. A small forward who, in the wake of significant team indecision and a career filled with playing in the shadow of more prominent teammates, rather than demanding a trade and publicly maligning the franchise, quite literally ran one of his vital organs into the ground in the pursuit of a championship banner for his teammates, his franchise, and his city. Pardon the expression, but it doesn’t get more metal than that.

Even now, after so many years of Elliott’s color commentary for the Spurs broadcast team, it’s easy to forget that he willingly stepped down from more prominent roles as an analyst for “The NBA on NBC” and as a commentator for ESPN in order to become an announcer for the Spurs in the first place. I guess old habits die hard. Or perhaps it’s just another example of Sean understanding what makes him happy better than the rest of us, and it just so happens that it’s still the players, the people, and the city of San Antonio. But then again, that’s just Sean Elliott: All heart, All Spurs, All The Time.