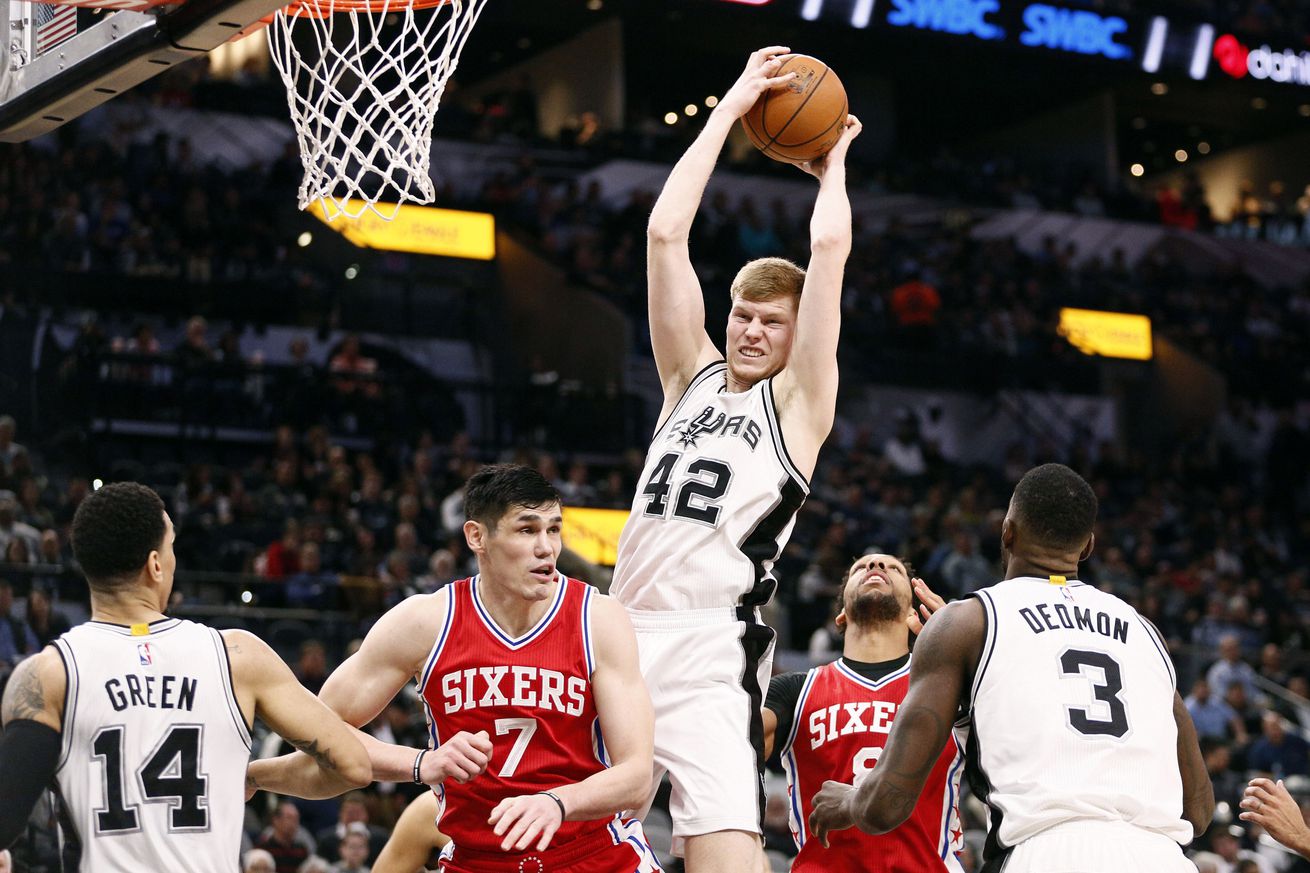 After a sloppy first half and lambasting from Pop, the Spurs took care of business in the second half against Philly.

The Spurs took on the Philadelphia 76ers for the first time this season with both teams missing their starting big men. The Spurs were without LaMarcus Aldridge (sore knee) and Pau Gasol (hand), and the Sixers were missing Joel Embiid (rest) and Nerlens Noel (illness). In a change from previous games, the Spurs were sloppy in the first half but came back stronger in the third quarter and put away a young but rising Philly squad.

Both teams started a little slow, with the Spurs missing several point-blank shots in the paint. With 6:43 left in the first quarter, the Spurs had hit only 5-of-16 shots but led 13-7 thanks to eight early points from Davis Bertans. The Spurs nostly relied on 10 second-chance points to maintain a slim lead of 24-21 at the end of the quarter despite shooting just 28.6% from the field.

Patty Mills opened the second quarter with his second straight three, but the Spurs continued to be extremely sloppy with the ball. After the starters returned, Kawhi Leonard got going and led the Spurs on a quick 8-0 run before an open three by Dario Saric led the 76ers on a 14-2 run of their own to take a 44-40 lead with 3:31 left. Bertans and Leonard responded with buckets to briefly retake the lead, but more lazy defense led to a complete line change by Pop. The Spurs shooting woes continued, and Philly led 53-48 at the end half led by 16 points from Ersan Ilyasova. Leonard had 12 points.

The Spurs still weren’t out of the locker room with three minutes left before the second half began, presumably because they were getting lambasted by Pop. The message that they needed to defend better didn’t get across, and Pop called timeout again just over two min into the third quarter and the 76ers having extended the lead to 60-53. This time the Spurs responded in the form of a 15-1 run to retake the lead, 66-61, with 5:11 left. The overall effort was much better on both sides, and the Spurs led 79-73 with 13 assists in the quarter heading into the final frame.

The offense remained strong to start the fourth quarter with the Spurs constantly seeking to attack the paint. Jonathon Simmons especially was all over the place on both ends. A Dewayne Dedmon alley-oop from Tony Parker with 7:16 left gave the Spurs their largest lead of the game, 91-79. A driving lay-up from Kyle Anderson stretched the lead to 15 with just under four minutes left, and Pop decided to start emptying the bench. The Spurs won 102-86 with seven players in double figures, led by 19 from Leonard.

Check back later for more on this one. The Spurs return to action on Saturday for their final home game before the Rodeo Road Trip again the Denver Nuggets.