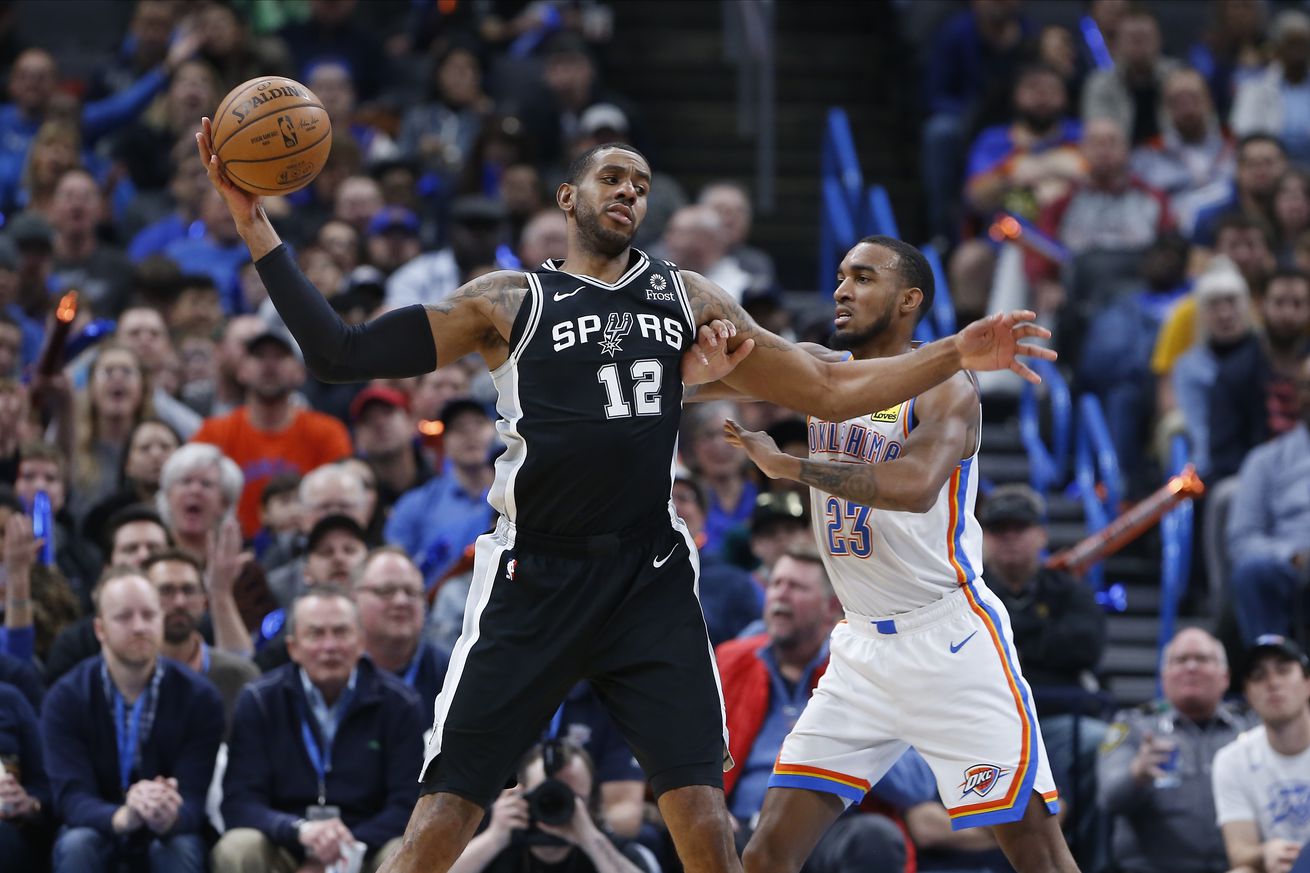 San Antonio puts their recent late-game woes away for at least one contest.

The San Antonio Spurs finally got their first win of the Rodeo Road trip as they held on to a lead down the stretch with the help of a suddenly assertive Dejounte Murray, against a Oklahoma City team that refused to say die. The Spurs look to stay in the win column with their next game against the Jazz, but must wait for the conclusion of the All-Star break to follow this performance up.

The game started out with a lot of bumping in the post in the opening frame, as each team looked to assert their will down low. San Antonio ran out some smaller leads with the help of their guards, but the Thunder reeled each one back with the aging yet unshakable Chris Paul at the helm. Dejounte Murray picked up a pair of fouls early, but Derrick White was there to pick up the slack, and he held the Spurs’ effort together with timely contributions on both sides of the court. In the meantime (and partly as a result of White’s efforts) Oklahoma City’s shooters went cold and they began fouling in their frustration. Some crisp ball movement late in the frame led to a more balanced scoring profile from the Spurs than they’ve had in the past few games, and by the end of the quarter the silver and black had managed to claw out a double digit lead as a result of an 11-0 run.

The second quarter looked to offer more of the same as the Spurs worked to increase their lead, but the Thunder began to convert on their opportunities (from three in particular) as San Antonio continued to be ice-cold from long distance (1-10 at that point) and the Oklahoma City defense locked in. Fortunately, the Spurs’ players collected themselves somewhat, began hitting the occasional three-pointer, and held their opponents to a virtual stalemate in spite of some questionable no-calls as they exited the first half up 49-41.

The stalemate contributed for the first several minutes of the second half, but then San Antonio came down with whatever was ailing the Oklahoma City in the first quarter, and the the Thunder seized their opportunity by going on an 11-0 run of their own to all but close the gap between the two teams. Again the Spurs fought back, but a number of unfortunate turnovers and fouls crippled their ability to pull away from the opposition. San Antonio looked to exit the third nursing in a dead heat or worse, but it was Derrick White to the rescue yet again as he helped the good guys finish the quarter with a narrow lead instead.

The Thunder continued their charge in the early fourth, looking to take the lead back from the Spurs for the first time since the opening minutes of the game, but Rudy Gay and LaMarcus Aldridge staved off the threat and jump-started San Antonio’s offense in the process as the team ran the lead back to eight points by the middle of the frame. The Thunder worked to reel them back again, but San Antonio (and Dejounte Murray) responded with a number of wet jumpers from the mid-range and continued to just hold them at arm’s length.

It was Patty Mills who would lead them to the promised land though, penetrating with prejudice and freezing his defenders with a tricky little array of moves, going as far as drawing a jump ball against the towering Steven Adams, as Dejounte Murray all but finished the Oklahoma City off with an absolutely cut-throat dunk a-la Manu Ginobli. Paul and the Thunder continued to fight, but it was Murray again with a clutch rebound and and some free throws to put the seal on the win. There was a little late drama as the Thunder refused to go quietly into that good night, but the Spurs did enough not to fumble it away and just like that San Antonio is back in the win column. Here’s to hoping that they can finally gain the momentum that they’ve so sorely lacked after this one.

Theme Song of the Evening: