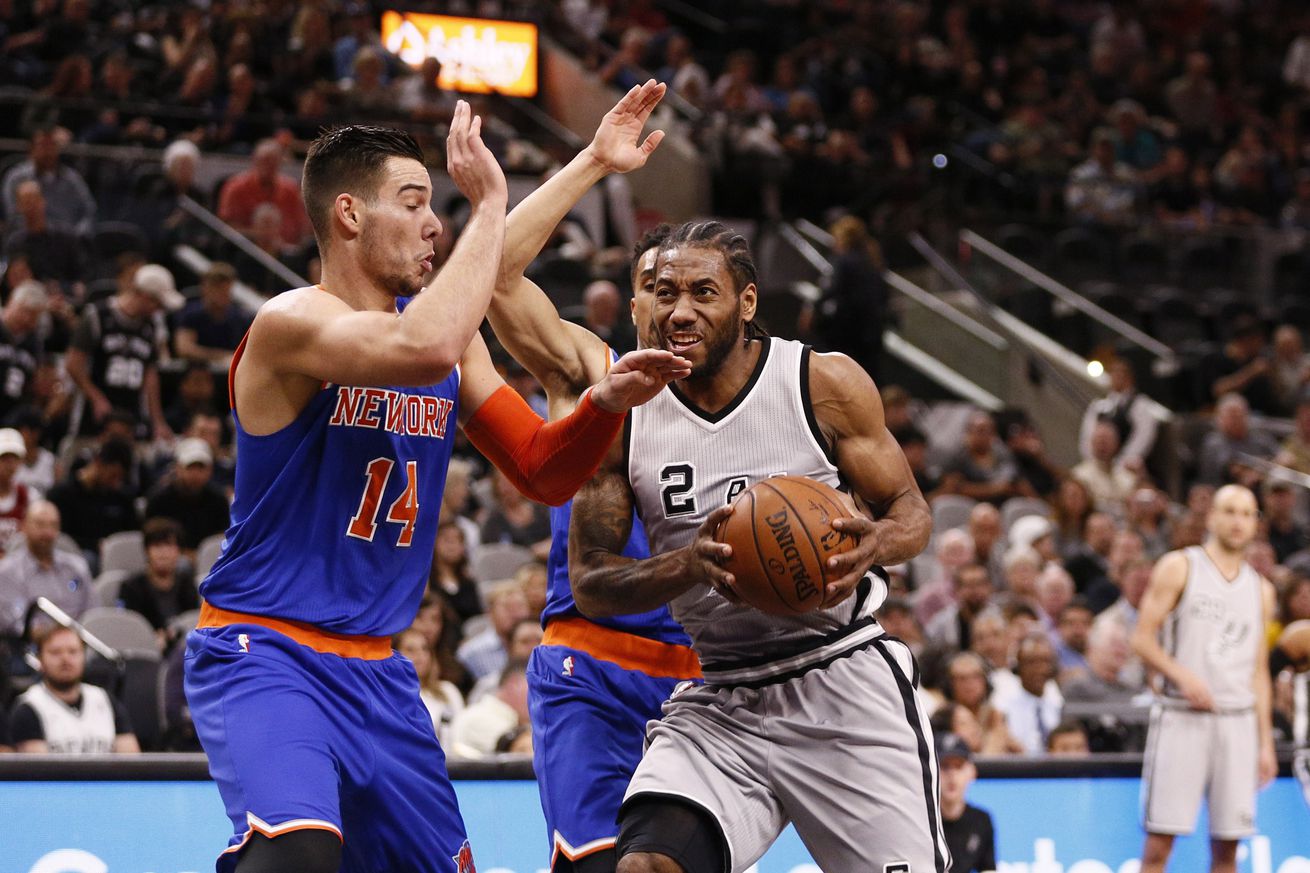 Three quarters of good basketball was enough to beat the slumping Knicks.

Before Thursday, there were two teams left in the league that the Spurs had yet to beat. They wiped one team off that list with a win over the Memphis Grizzlies, and tonight they had a chance to get revenge on the other: the New York Knicks. The Spurs almost spoiled an excellent first half with a stinky third quarter, but they came back to life in the fourth for their fourth-straight win.

LaMarcus Aldridge scored the first five points for the Spurs: a long two and three, both from the top of the key. Jonathon Simmons, who got the start for a resting Danny Green, got a couple of lay-ups of his own, and the Spurs led 15-9 midway through the first quarter. Kawhi Leonard got going, scoring six straight points, followed by a Pau Gasol three. Kristaps Porzingis picked up three fouls in the quarter and had to sit, and the Spurs continued to pile it on for a 33-23 lead at the end of the quarter. Leonard and Aldridge had nine points each, while Lithuanian rookie Mindaugas Kuzminskas, starting in place of Carmelo Anthony (sore knee), was the only bright spot for the Knicks with 13 points on 5-5 from the field.

After shooting 67% in the first quarter, the Spurs inevitably weren’t quite as hot to start the second but continued to defend well. A banked triple by Leonard gave him his 99th straight game in double figures, and New York allowed Slow-Mo Kyle Anderson to drive the length of the floor for a lay-up and a 46-28 lead. After getting into the bonus relatively early, the Knicks got back within 12 from the free-throw line, but the Spurs regrouped after a timeout with 4:48 left. They got the lead to 20 on a Leonard jumper and led 61-43 at the half with three players already in double digits (Leonard: 18, Gasol: 12, Aldridge: 11).

The third quarter started a little sloppy for the Spurs with turnovers and shots rolling off the rim. The Knicks went on an 8-0 run to get within 12, 65-53, almost five minutes into the quarter. As shots continued to jiggle out for the Spurs, the Knicks got within six with two minutes left. Kuzminskas and Willy Hernangomez gave the Spurs’ suddenly discombobulated defense plenty of trouble in the paint and on second-chance points, and what was a 20 point lead dwindled all the way down to just four heading into the final frame, 78-74.

The sloppiness and silly mistakes, like missed hand-offs off of rebounds, continued for the Spurs to start the fourth quarter. The offense finally got going again after a quick timeout mostly by attacking the offensive glass more. Two threes from Patty Mills and one from Leonard got the lead back to twelve, 96-84, just past the six-minute mark. Derrick Rose, who had a good game with 24 points, got two straight buckets out of a timeout, but Mills, Gasol, and Leonard each hit shots to get the lead back to 13 with three minutes left. That would be enough, and the Spurs went on to win 106-98.

The Spurs return to the AT&T Center on Monday to take on the defending-champion Cleveland Cavaliers to kick off a humdinger of a week, with games against the Warriors, Thunder, and Jazz to follow.