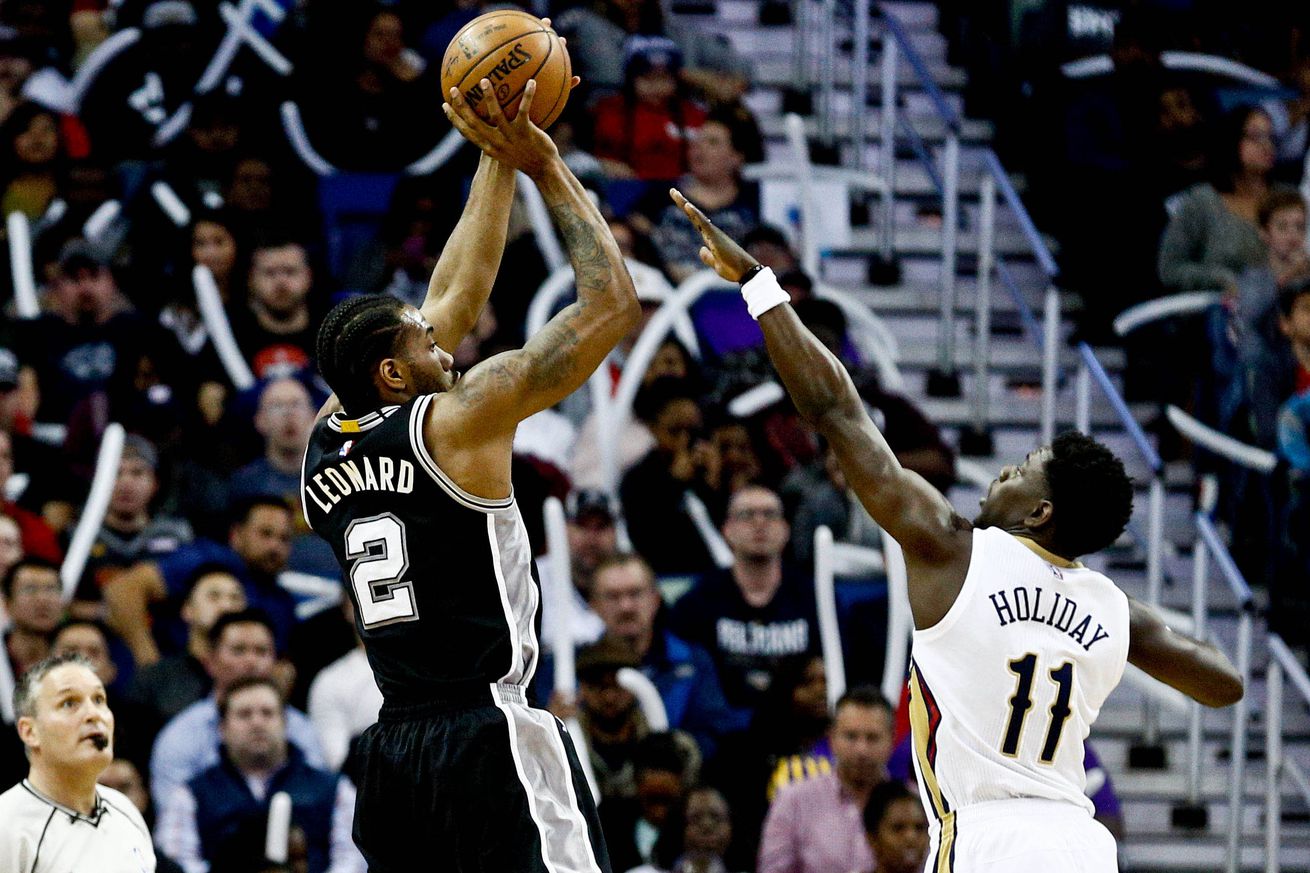 The Spurs won a defensive, OT battle in NOLA for their 6th straight win

The Spurs got their first taste of the new look Pelicans Friday night, with Demarcus Cousins back in the lineup after missing the Pelicans’ last game for technical foul accumulation. Dewayne Dedmon started again, although Kawhi Leonard started the game on Boogie, who scored 37 against the Spurs earlier in the season, the second most given up by the Spurs to any one player this season. Anthony Davis started quick for the home team, poking the ball from Pau and finishing with an alley-oop slam on the other end. Davis finished the first with 10 points, and took a 30-27 lead into the second quarter. Davis also went to the locker room in between quarters, injuring his left hand on the backboard on the last shot of the quarter, leaving him questionable to return. Kawhi was, of course, a bright spot in the first, leading all scorers with 14.

The Pelicans stretched their lead to 8 in the second, due in part to missed opportunities for the Spurs. Jonathon Simmons missed a layup of a steal and an easy dunk, which only served to highlight the miscues by the Spurs. Davis came back mid-second quarter and the Spurs ended the quarter leading 49-48. Kawhi had an extremely effecient first half, leading all scorers with 20 points on only 12 shots and no turnovers.

The Spurs tightened up the defense in the third quarter, keeping New Orleans only 18 points, but only able to score 18 themselves, taking a slim 67-66 lead into the 4th. Demarcus Cousins had 9 points in the quarter, leading the Pelicans with 17 after 3. Kawhi had only 4 in the quarter, shooting 1-5, but still led all scorers with 24. Jrue Holiday also had a nice 3rd quarter, ending with 15 points for the home team.

Aldridge did a good job on Davis, for the majority of the night, keeping him to 15 points in the first 3 quarters, but that all fell apart in the fourth, where Davis went off for 10 points to finish with 25. Dedmon fouled out with just over 7 minutes to go in the 4th, leaving Gasol and Aldridge to handle the two young, athletic stars without a break. The Spurs finished the night only 15-25 from the stripe. Holiday got past Gasol for a floater that put New Orleans up 4 with just under a minute left, and Kawhi got to the line and split the two shots, but made up for it with a steal+slam to bring the Spurs back within one with 31 seconds left. Pau went to the line with 6.6 left and split to tie the game at 89, and Davis got the rebound, giving the home team a chance to win with 5.4 left. Holiday missed the fade-away over Aldridge to allow us some free ball in the Big Easy.

Jrue Holiday hit a huge three to open up the extra period, and then got a steal off Patty Mills and fed Davis for the slam to give NOLA a 5 point lead. And then, after missing 13 straight threes, Pau and Patty connected to give the Spurs a two point lead, which they never relenquished, despite a decent look by Cousins at the buzzer, the Spurs won in Spursy fashion, 101-98.

Kawhi was brilliant once again, leading all players with 31, while also having 3 HUGE steals. Davis led the Pelicans with 29 and Cousins had 19, with Holiday killing the Spurs with 26, but it wasnt enough tonight. Aldridge had 21 and 14 for the good guys.

San Antonio heads back home to take on the Timberwolves tomorrow night at 8.