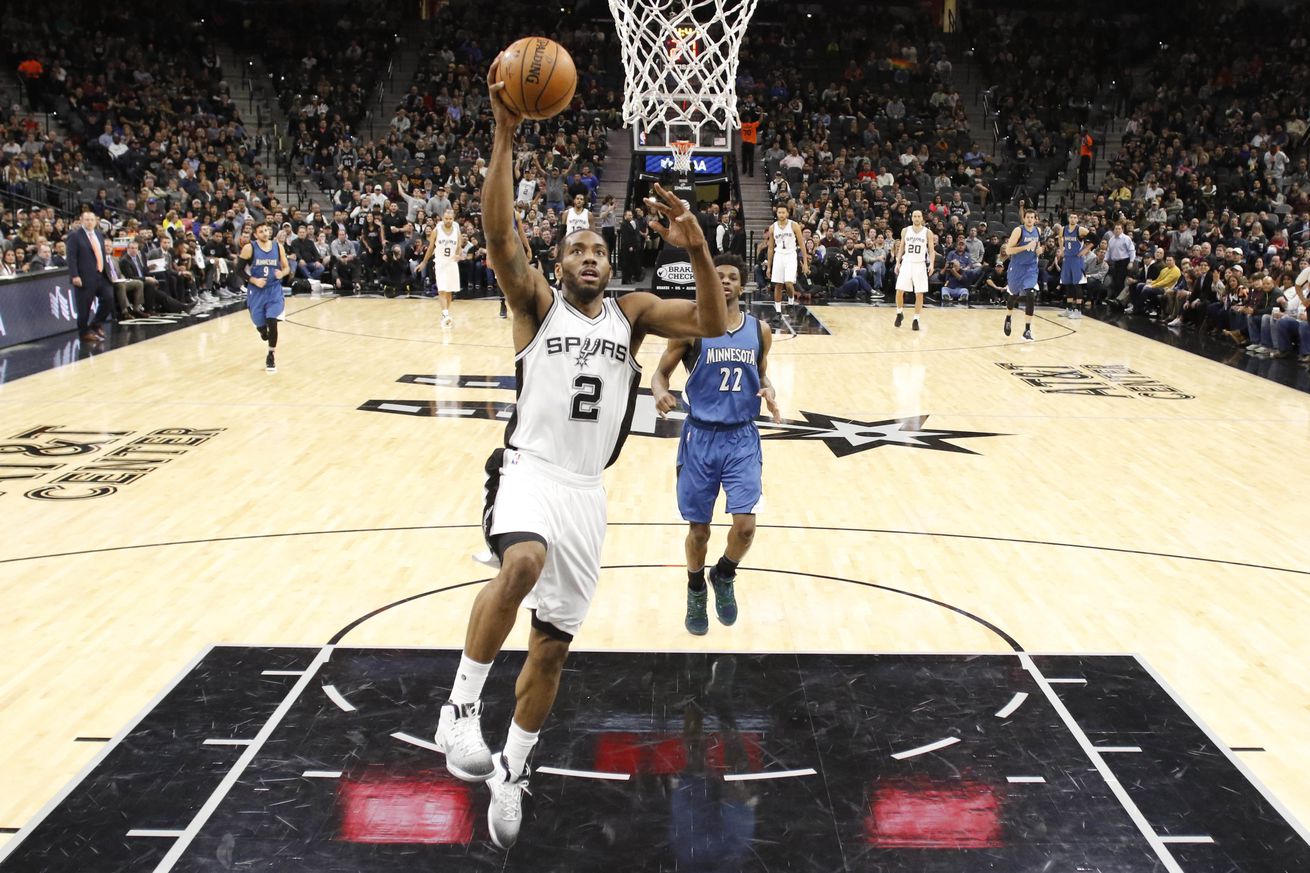 Spurs beat the Timberwolves in a wild shootout from the free throw line.

The Spurs returned home to the comfy, low-altitude confines of the AT&T Center hoping to redeem their loss in Mexico City. After an extremely slow (but high-scoring) first half that featured 52 total free throws, the Spurs ran away in the second half behind strong shooting from Kawhi Leonard, LaMarcus Aldridge and the bench.

The Spurs started the game with much more energy than they had in Mexico City, creating plenty of good looks for themselves in the opening minutes, but they couldn’t get much to fall. Perhaps in an effort to energize his players, Pop picked up a technical that put the Spurs down 18-13 after arguing for loose-ball foul on the Wolves. The bench responded with Manu Ginobili and Patty Mills both hitting two threes. The first quarter ended with the game tied 30-30 after Bryn Forbes fouled Nenmanja Bjelica on a last-second three.

The Wolves opened the quarter on a 7-1 run before the Spurs’ offense got going again. They regained the lead at 40-39 but just couldn’t keep the Pups off the line amidst some extremely tight officiating. The Spurs finally entered the bonus with just under four minutes left in the half and got a few calls themselves, but it wasn’t enough to completely overcome what was as high as an 8-point deficit as the onslaught at the line continued. The Wolves led 71-67 at the half largely on the back of 30 FT’s (21 in the quarter), dwarfing the Spurs also-high 22 attempts. Leonard and Karl-Anthony Towns led all scorers with 17 points apiece.

The Spurs were actually allowed to defend to start the third quarter and quickly tied things back up at 73-73, but all those free throws had the Wolves in a good shooting rhythm. They responded with a 14-6 run, leading by as many six multiple times. The Spurs responded with 7-0 run of their own, capped by a four-point play by Leonard to gain a 92-90 lead at the end of a third quarter that seemed to fly by without so many free throws.

The Spurs scored the first eight points to start the fourth quarter to stretch the run to 15-0 and took a 98-90 lead before the Pups scored again. A running dunk in transition by Leonard gave the Spurs a 103-92 lead with 7:36 left, but the refs’ happy-whistles returned, with the Wolves got in the bonus early again. They eventually cut the Spurs lead to 112-105 with four minutes left but could get no closer, and the Spurs won 122-114. Leonard scored 34 points for his fourth 30+ game in a row.

Check back later for more on this one. The Spurs return to action on Thursday to take on the Denver Nuggets at home.