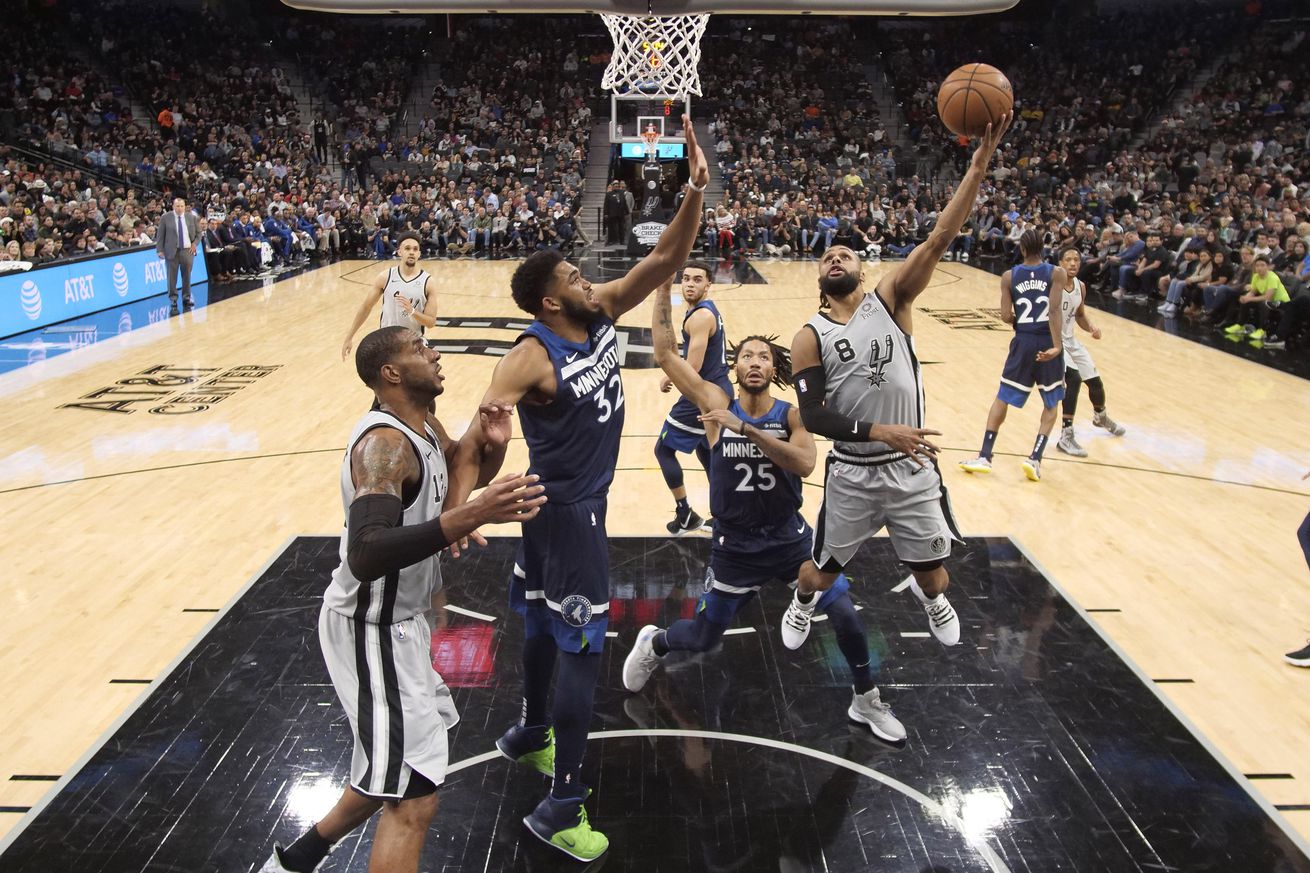 Spurs reserves put the game away with hot shooting from Bertans, Belinelli as the Spurs routed the Timberwolves.

The Spurs have been on a hot streak lately, and tonight it was the bench players who put away the Minnesota Timberwolves with hot shooting from Marco Belinelli and Davis Bertans sealing the game in the second half as LaMarcus Aldridge and DeMar DeRozan sat on the bench resting for the second half. Derrick White had a solid game on defense, taking on taller players on switches and holding his own as often as not. Robert Covington was solid for the Timberwolves, hitting outside shots and playing defense, but they were missing their starting point guard, Jeff Teague, and with Derrick Rose missing the second half with an injury, the Wolves couldn’t do much on offense as the Spurs won easily.

After both teams missed open shots to open the game, the Spurs scored the first points on a Derrick White alley-oop dunk assisted by Rudy Gay. A Rudy Gay triple gave the Spurs a 5-0 lead, until the Wolves finally scored on a Karl-Anthony Towns layup. Robert Covington’s triple and and Taj Gibson’s jumper in the lane that was emphatically rejected by Gay [goaltending] gave the Wolves their first lead at 11-10. The Spurs came back with a 7-0 run to take a six point lead. The last few moments of the quarter were helter-skelter, but that’s Marco Belinelli’s bailiwick as he took an irrational shot and made it as the Spurs closed out the quarter on a strong note and led 29-21 after one quarter.

Covington picked up his third foul as the second quarter started, and Bryn Forbes hit a triple to give the Spurs their first double digit lead of the game. Marco’s triple quickly extended the lead to 14, but a quick turnover from a bad Mills pass gave Tyus Jones an easy layup, leading to a quick Gregg Popovich timeout. Marco Belinelli went supernova as he hit three open three-point shots and the Spurs led 47-26 early in the quarter. No one on the Wolves could do much, except for Dario Saric, who found himself matched up on the smaller Derrick White and tried to take advantage. The Spurs swelled the lead to 26 late in the quarter, but poor execution and turnovers let the Wolves climb back in and cut the lead to under 20 and the Spur led 62-44 at the halftime break.

LaMarcus picked up a quick foul at the start of the third quarter for his fourth, as did Rudy Gay shortly after that, and Pop was forced to take them both out. The head scratching calls continued as Davis Bertans picked up another strange foul early. But the Spurs powered through it as Bryn Forbes and Bertans hit shots to give the Spurs a 69-45 lead. With the starting bigs out, Jakob Poeltl got to the basket and took advantage. Towns and Andrew Wiggins did their best to keep the Wolves in it, and they cut the lead back to 18 halfway through the quarter. After DeMar got grabbed and didn’t get the foul call, he hacked Wiggins and got called for a tech, which let the Wolves cut the lead back to 17. The Wolves cut the lead down to 14 on a Taj Gibson step-through layup, and I was starting to feel a little Bulls deja vu, as the Spurs’ lead was reduced to 14. The weird calls continued as Karl Anthony-Towns hooked DeMar and somehow it was called a foul on DeRozan, giving KAT two undeserved free throws. The Spurs looked a little tired to finish the quarter, but LaMarcus hit a shot clock beater three to keep the Silver and Black in the lead, 87-71 after three quarters. Despite looking out of sorts for most of the third, they only gave up 2 points of their lead.

The Spurs moved the ball around to start the fourth leading to a Bryn Forbes three to start off the scoring. The Spurs hit outside shots with Marco and Davis as they swelled the lead to 24 early. Covington’s defense was the focal point for the Wolves, as the only thing the Spurs did wrong was giving up the ball, giving the Wolves fast break opportunities, which made Pop call a timeout, even with a 20 point lead. Derrick White extended the lead back to 25 halfway through the quarter with an and-one in the lane to put the Spurs up 108-83. Garbage time commenced with four minutes left, and Quincy Pondexter got in the action with a layup. Dante Cunningham and Drew Eubanks also put in good effort to close out the action as the Spurs won

In honor of the solstice:

The Spurs travel to Houston to play the Rockets at 7:00 PM on Saturday. They played poorly early in the season, but they started to put it together after shedding Carmelo Anthony, unfortunately for them, they just lost Chris Paul to a hamstring injury and could be in trouble. LaMarcus Aldridge and DeMar DeRozan should be well-rested for the back-to-back, so that should be a plus for the Silver and Black. It could be a good chance for the Spurs to pick up a game in the standings against a contender, or it could be another missed opportunity, let’s all watch and find out.