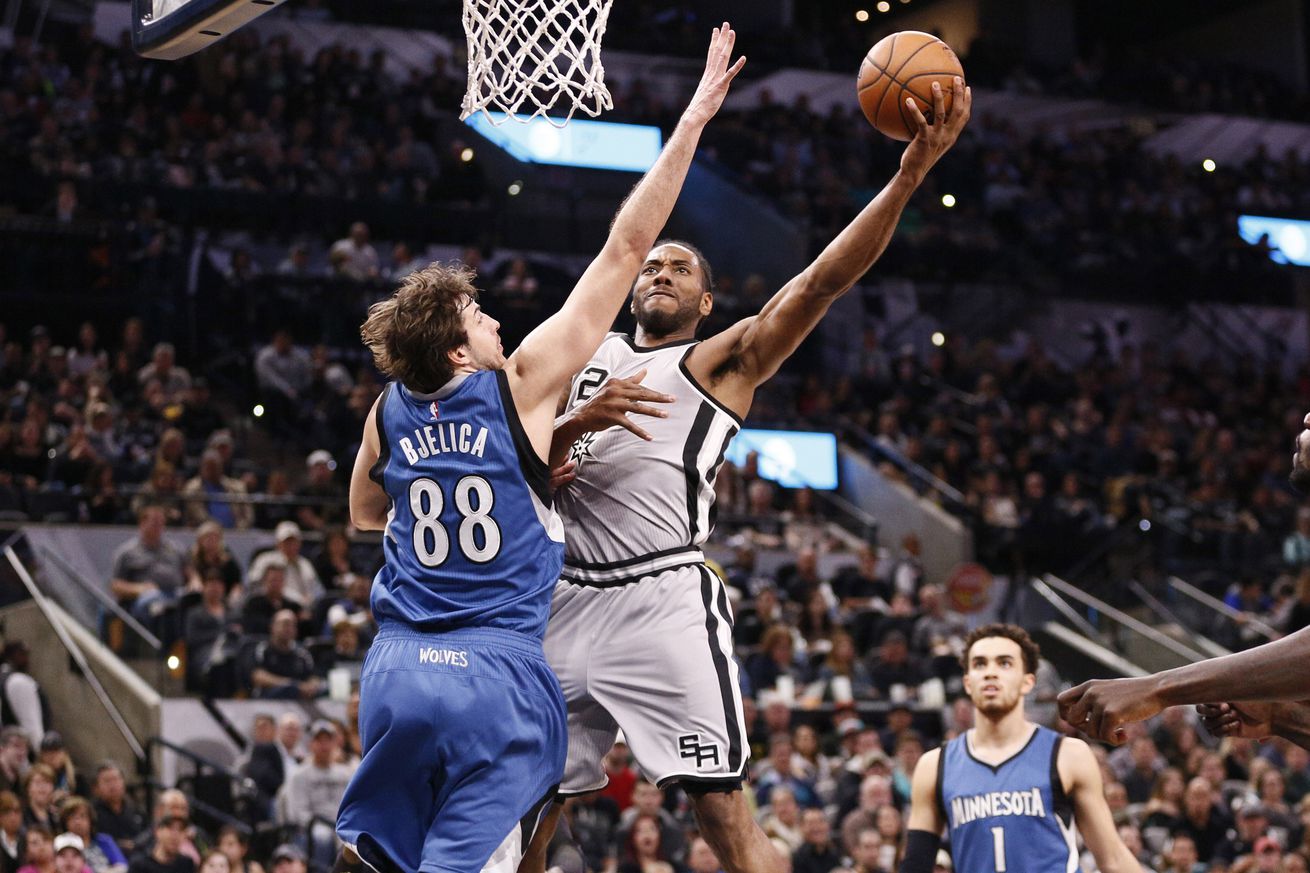 The Spurs shook off a slow first half and won their second straight overtime game.

After a sluggish half, the Spurs found some energy and beat the Minnesota Timberwolves 97-90 in overtime. Kawhi Leonard continued to dominate, posting a final line of 34 points, 10 rebounds, 5 assists, and 6 steals. The Spurs allowed just 35 points in the second half and overtime combined.

The Spurs very much looked like a team who played a physical overtime game less than 24 hours ago to open the game. It took almost three full minutes for the Spurs to get on the scoreboard with a corner three by Tony Parker. From there it continued to be tough sledding on offense for the Spurs. Parker missed all four of his free throw attempts in the quarter, and the team as a whole shot just 16.7% (1-6) from the line and 33% from the floor. The only silver lining was a decent defensive showing by the Spurs, including a nice transition strip of Gorgui Dieng by Jonathon Simmons. The Spurs faced a 26-14 deficit at the end of the period.

Notable first quarter stat: Minnesota beat the Spurs up on the boards, holding an 18-8 rebounding advantage through one quarter.

The pace of the game improved some early in the second quarter, but both teams were still very sloppy. Pau Gasol got a nice basket down low and got fouled, but as has been the trend lately, missed the free throw. The combo of Towns and Nemanja Bjelica gave the Spurs problems, pushing the Wolves lead as high as 16. A clearly frustrated Aldridge viciously slammed one home off an offensive rebound and seconds later hit an off balance jumper plus a foul. That sequence gave the Spurs a momentary jolt, and it was nice to see Aldridge stay aggressive through the rest of the quarter. But Towns was too tough, and the Spurs trailed 55-43 at the half.

Notable second quarter stat: Another quarter, another bad stat. The Spurs allowed the Timberwolves to shoot 56.5% (13-23) in the second quarter. Towns shot 6-7.

The Spurs came out of the locker room with a lot more energy. Dedmon was the driving force behind a Spurs run to cut the lead to 7, scoring with his left hand three times, twice off of offensive rebounds. The Spurs continued to scratch and claw through the period, and while the offense was a far cry from what we’re accustomed to seeing, the defense was locked in. Kawhi pulled off his signature steal and slam, which is becoming as iconic as a Tim Duncan bank shot, a Manu Ginobili Euro-step, or a Tony Parker teardrop floater. A deep, buzzer beating three by Bjelica left the Spurs in a 70-62 hole heading to the final quarter.

Notable third quarter stat: the inverse of the second quarter, as the Spurs held the Wolves to 33% shooting in the third.

Coach Pop went to Dejounte Murray to replace Patty Mills in the lineup early in the fourth, spelling the end of the night for Parker. Murray made his presence felt with a sky-high floater, and was an impressive +6 during his 4 minutes of play. The Spurs defense was fully in sync, swarming every Timberwolves ball handler and playing physically inside. Leonard once again showed why he is an MVP candidate, scoring 14 points in the final quarter, mostly on aggressive moves in the paint. The Spurs finally took their first lead of the game with 2:45 to go on a Kawhi baby hook shoot. The teams then traded buckets before Kawhi contested and forced a miss on a Wiggins jumper. The Spurs had the ball with 18 seconds to play and the score tied. Pop went with an isolation play for Kawhi, but he was unable to get a shot off before the buzzer sounded.

Notable fourth quarter stat: the Spurs’ swarming defense forced the Timberwolves into 3 shot clock violation in the final period and held them to points overall.

All of the sudden the offenses for both teams came alive in overtime. Gasol tipped in an Aldridge miss and nailed a three from the top of the key. Rubio hit a three and an off balance jumper which gave him a triple double for the game (11 points, 12 rebounds, 10 assists). Leonard once again took over, hitting a jumper and getting two free throws after picking Wiggins’ pocket for a steal. Tough defense by the Spurs sealed the 97-90 win.

Up next for the Spurs: the Houston Rockets visit the AT&T Center on Monday. The Spurs will look to create some more separation between themselves and the Rockets, who are currently in third place in the West, 5 games behind the Spurs.