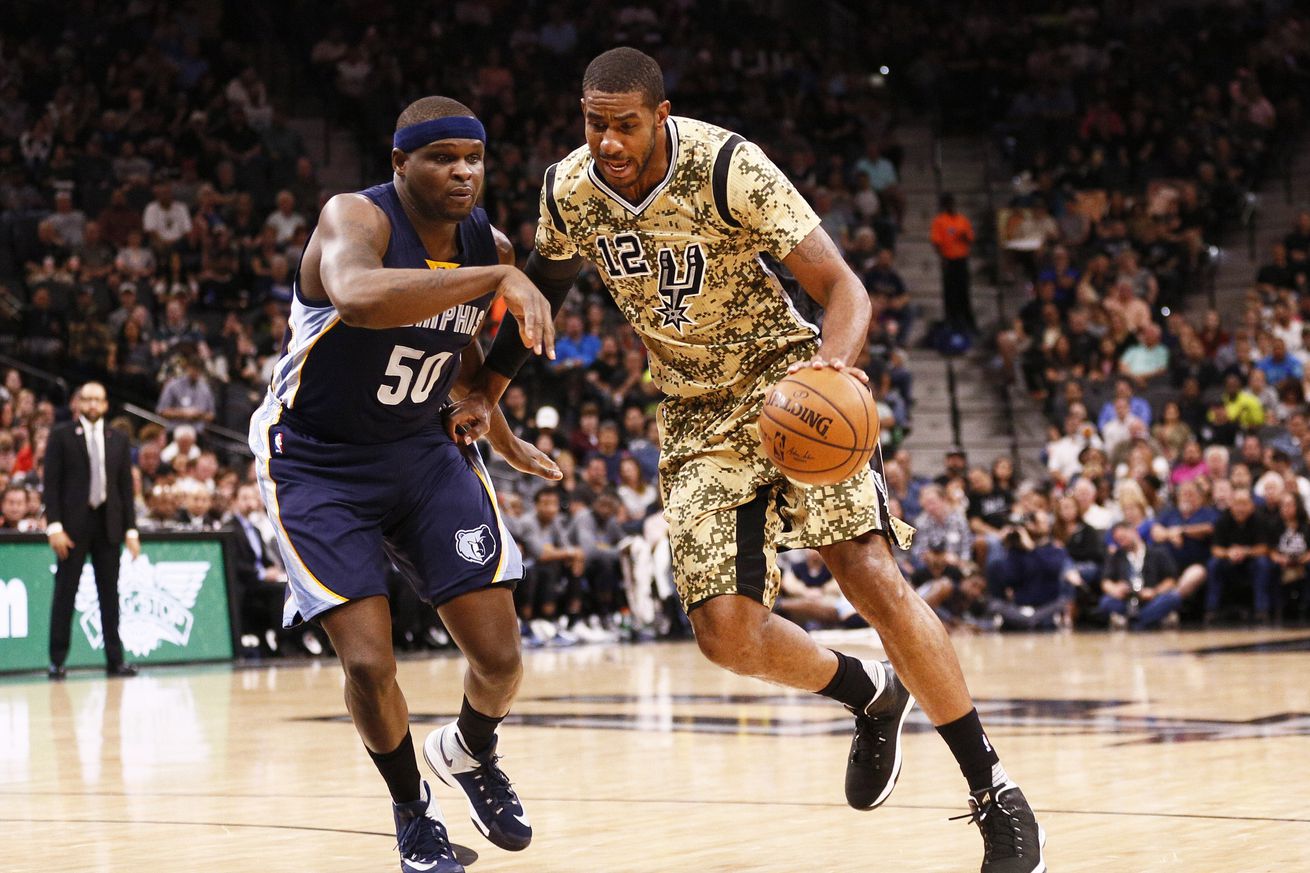 After a strong first half, the Spurs got a playoff-like victory against Memphis.

After losing their two games in Memphis this season, including just last Saturday, the Grizzlies entered the AT&T Center as the only West team the Spurs hadn’t beaten this season. The game went more like you would expect it to, with the Spurs holding the Grizzlies in check on defense while grinding their way to victory behind another excellent night from a revamped LaMarcus Aldridge.

Dewayne Dedmon got an open dunk on the first play af the game, but after a wide open Vince Carter three, Pop called timeout just 1:10 into the game. The Spurs responded with an 11-2 run and much more aggressive defense to take a 13-5 lead midway through the quarter. Aldridge again looked sharp, scoring six straight points on all different shots at one point. Marc Gasol got going a bit after Dedmon had to sit with two early fouls. Memphis tied things back up at 21 apiece, but the Spurs outscored them 6-1 in the final minute to take a 27-22 lead at the end of the quarter.

Manu Ginobili opened the second quarter with a three, and after Mike Conley got his team back within two, the Spurs went on an 13-0 run, including 6 points from Patty Mills and four from Tony Parker, to take a 45-30 lead with 6:07 left in the half. The Grizzlies got better for a little while after a timeout and got things within ten with just over two minutes left. The final minute was sloppy as both teams were in too much of a hurry. Pop earned a technical with 17 sec left after he wanted foul for Kawhi Leonard getting tripped in transition by Tony Allen (and probably in several other instances), and the Spurs led 51-42 at the half. Aldridge led all scorers with 11 points, and the Spurs had 16 assists to just three turnovers in the half.

Both teams came out aggressive to start the second half, and things even got a little chippy as the physicality picked up. Each team played hard defense, but the Spurs still led by eight, 63-55, midway through the quarter. The Spurs started having a little trouble on the boards and with turnovers as Memphis continued to chip into the lead, getting as close as three before Leonard got a lay-up just before the buzzer, and the Spurs led 74-69 heading into the final frame.

Memphis scored the first five points of the fourth quarter to tie things up before an 11-0 run, led by two David Lee lay-ups, got the Spurs back up to double digits, 85-74. The Grizzlies stopped double-teaming Leonard on defense, and he took advantage by abusing the smaller Allen in the midrange. A pretty 2-on-1 sequence between Parker and Mills off a Leonard steal led to a three-point play by Mills to get the lead back to double digits before Conley answered with one of his own. Memphis kept it close from the free throw line, getting as close as five left before a Parker three with 26 sec left. Troy Daniels answered with a three of his own, but it was not enough as the Spurs went on to win 97-90.

The Spurs record improves to 55-16. The Spurs return to the AT&T Center on Saturday to take on the other team who beat them during the Rodeo Road Trip: the directionless New York Knicks.