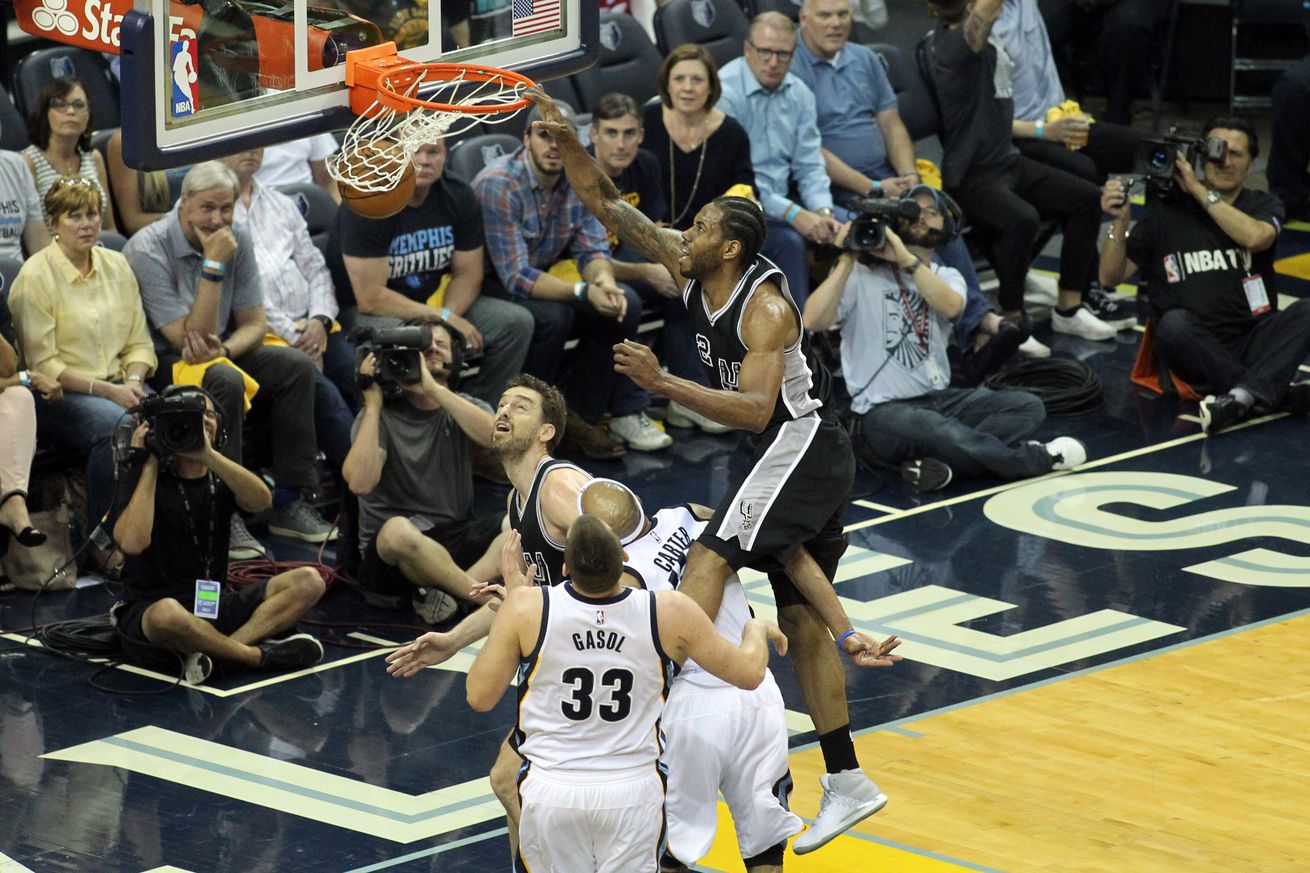 The Spurs traveled to Memphis having protected their home court in the first two games of the series. This game would prove to be much different than the first two, as the Spurs failed to get their offense going and Memphis pounded the ball in the paint to pull away in the second half on their way to a 105-94 win. Kawhi Leonard led the Spurs with 18 points in 30 minutes, and LaMarcus Aldridge chipped in a double double with 16 points and 11 rebounds. Memphis’ classic “grit and grind” trio of Mike Conley, Zach Randolph, and Marc Gasol scored a combined 66 points.

The Grizzlies changed things up for Game 3, inserting Ennis and Randolph into the starting lineup. They were part of the group that helped carve a 26 point deficit down to 4 in Game 2, so coach David Fizdale — $30,000 lighter in the wallet after being fined for his rant about the Game 2 officiating crew and searching for answers — decided to ride with them.

From the tip, the FedEx Forum, aka the “Grindhouse,” was raucous. Aldridge came out aggressive, first hitting a tough fadeaway jumper and then drawing three free throws after being hacked by Randolph on a corner attempt. Fizdale seemed to be getting his money’s worth soon after, as the Spurs racked up 4 quick fouls, including a pair on Dedmon, which sent him to the bench earlier than usual. Midway through the period, Kawhi got Marc Gasol switched onto him. Leonard crossed over, drove down the middle of the lane and delivered a poster dunk around Gasol and over Vince Carter. Kawhi picked up his second foul about a minute later, and Danny Green was tagged for two in the quarter as well. Still, the Spurs were the more aggressive team on offense, especially in the paint. Not many shots were falling, but the Spurs were +4 from the free throw line in the quarter. Despite shooting just 35% from the floor, San Antonio finished the quarter tied 21-21.

One more time for the people in the back… pic.twitter.com/uGBWqNxswv

The pace to start the second quarter quickened considerably. Randolph, in particular, wreaked havoc on the Spurs defense, scoring 11 points on 5-5 shooting in the first 6 minutes of the quarter. Besides a bad turnover coming out of a timeout, Kyle Anderson once again provided some solid minutes, even successfully guarding Marc Gasol on a switch. Kawhi more than held his own, knocking in a pair of triples, a pair of free throws, and nailing a jumper after sending Wayne Selden to the floor with a dizzying spin move. Danny Green hit two floaters and a layup (!!!) and somehow attempted only one three pointer during the half. Not much else was doing for the Spurs offense, though, and Marc Gasol picked up where Randolph left off scoring 6 points late in the half.

Notable second quarter stat: 0. The Spurs failed to force a single turnover in the second quarter, and didn’t commit a single foul until Patty Mills used their foul to give with 10 seconds left in the half. It was a very clean quarter, for better and worse.

The second half did not start well for San Antonio. First, Dedmon was unable to pass the ball in bounds, turning it over and allowing Randolph to capitalize with a post bucket. The next Spurs possession also ended in a turnover, as Parker stepped out of bounds on the sideline. Memphis again took advantage, with Marc Gasol drilling a wide open three from the top of the key. This prompted a Gregg Popovich timeout just 52 seconds into the quarter and with the Spurs facing their biggest deficit, 9 points. After the timeout, a lineup of Patty Mills, Jonathon Simmons, Kyle Anderson, David Lee, and Pau Gasol entered the game, with all 5 starters heading to the bench to face Pop’s ire. Lee struggled mightily on defense, getting beat multiple times for and-one buckets. Memphis eventually pushed their lead to 18 as the Spurs searched for answers inside. Almost nothing went right for the Spurs the rest of the quarter, and the scoreboard reflected that: Memphis led 81-63 heading to the final period.

Notable third quarter stat: O, again, only this time it’s the number of combined points and assists Tony Parker had through three quarters.

(I always try to find a highlight play for each quarter, and this is the best I could do for this third quarter. Sorry, guys.)

We see you Kyle! pic.twitter.com/mfRw3UkRCI

Leonard opened the final quarter with a dunk, but the excitement was short-lived as Memphis continued to abuse the Spurs in the lane. Coach Pop sensed that the Spurs just might not have the answer tonight and subbed in Simmons, Davis Bertans, Dejounte Murray, Anderson, and Lee. Simmons was able to nail a couple threes, but it wasn’t enough to put the game back in contention as Memphis’ starters continued to score against the San Antonio reserves. Rookies Bertans and Murray got some playoff seasoning late, and that can only help them going forward. Otherwise there weren’t a lot of bright spots for the Spurs, and the final quarter was a formality as the game ended 105-94.

Kawhi starts the fourth quarter with a throw down!

LET’S DO THIS. #GoSpursGo pic.twitter.com/jQjU8NF7FE

Up next for the Spurs: San Antonio will try to get their rhythm back in the Grindhouse Saturday night for Game 4.