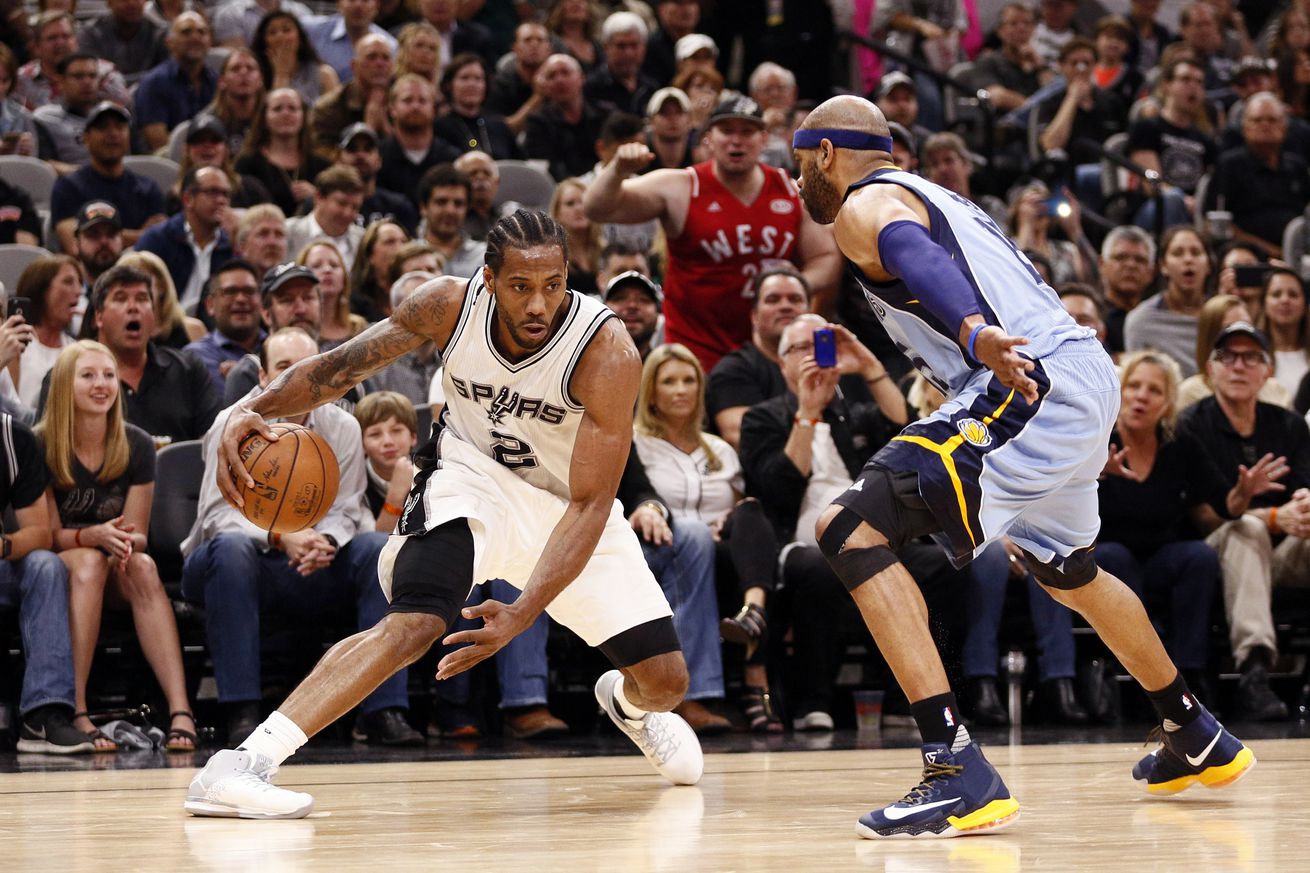 After San Antonio built a lead as high as 26 in the first half, Memphis slowly chipped away to bring it within four early in the final period. Wide-Open 3s by Pau Gasol and Tony Parker finally put Memphis away for Game 2, as the Spurs escaped with a huge win.

Tony got going early, with a vintage elbow shot, then a vintage floater. He continued his aggressive play, consistently going right at Mike Conley. Danny Green hit a 3 to give the Spurs a 20-12 lead. Conley had another good 1st Q, ending it with 8 points, but Kawhi Leonard ended the first with 10, Including a beautiful turnaround jumper and 4-4 from the line to lead all scorers. San Antonio held the Grizz to 6/25 shooting and ended the first leading 29-16.

Tony hit two consecutive threes early in the second, and went to the bench grinning when Memphis called time. It’s good to see him having fun and playing well when we need him the most, and it’s obvious he’s happy about it too. Those 3s gave Tony 10 points and the Spurs a 17 point lead. Vince Carter picked up a tech trying to get into the head of Kyle Anderson, and Anderson showed great poise by not talking back. The Spurs’ swarming defense made it such a chore for Memphis to even get a shot off, and they ended the half 15/45 from the field. Marc Gasol was kept in check, unlike Game 1, ending the half with 3 points on 1/8 shooting. Memphis was awful from 3, even more-so than usual for them, shooting just 2/13 in the half, missing 10 straight during a particularly painful stretch in the second. Kawhi led all scorers with 18 in the first half, and Mike Conley led the Grizz with 14. SA led at the break 56-37.

Memphis slowly started to chip away at the lead, getting it as low as 11 before Pop called time, thanks to some missed shots by the Spurs and great defense by the visitors. Pau had a great 3rd quarter, hitting a 3 then driving hard to the lane on Zach Randolph for the tough lay-in. Speaking of, Z-Bo had a great 3rd, scoring 6 of his 18 and being generally disruptive on defense. For Memphis, the 3rd quarter was a complete 180 in almost every regard…4 steals, 8/15 from the field, and outscoring the Spurs 28-19. But, Spurs gonna Spur, and they still took a 10 point lead into the final frame, 75-65. Kawhi scored 9 in the quarter to bring his total to 27, and Conley continued to lead Memphis with 19. this was Memphis’ first won quarter since Game 1, Q 1.

Conley hit the first shot of the 4th, a three to get the Spurs lead to 8, single digits for the first time since late in the first. Marc Gasol then hit a turnaround on Lamarcus Aldridge plus the freebie, and all of a sudden, the Grizz are on an 11-0 run to bring them within 4. Travels by Tony and Kyle Anderson on consecutive possessions helped the Grizz in their comeback. Kawhi finally stopped the bleeding with the Spurs’ first points of the 4th with 8:28 left. And then, Tony hit another corner three and the whole city of San Antonio breathed a sigh of relief. After Pau hit a 3 from the top of the key, the Memphis spirit finally seemed broken, at least for Game 2. Kawhi got a new playoff career high in points with an extremely efficient 37 on only 14 shots, aided by his 19/19 from the stripe, contributing to the Spurs shooting 31-32 from the line, including 18 straight to end the game. Mike Conley led Memphis with 24 points in the losing effort.