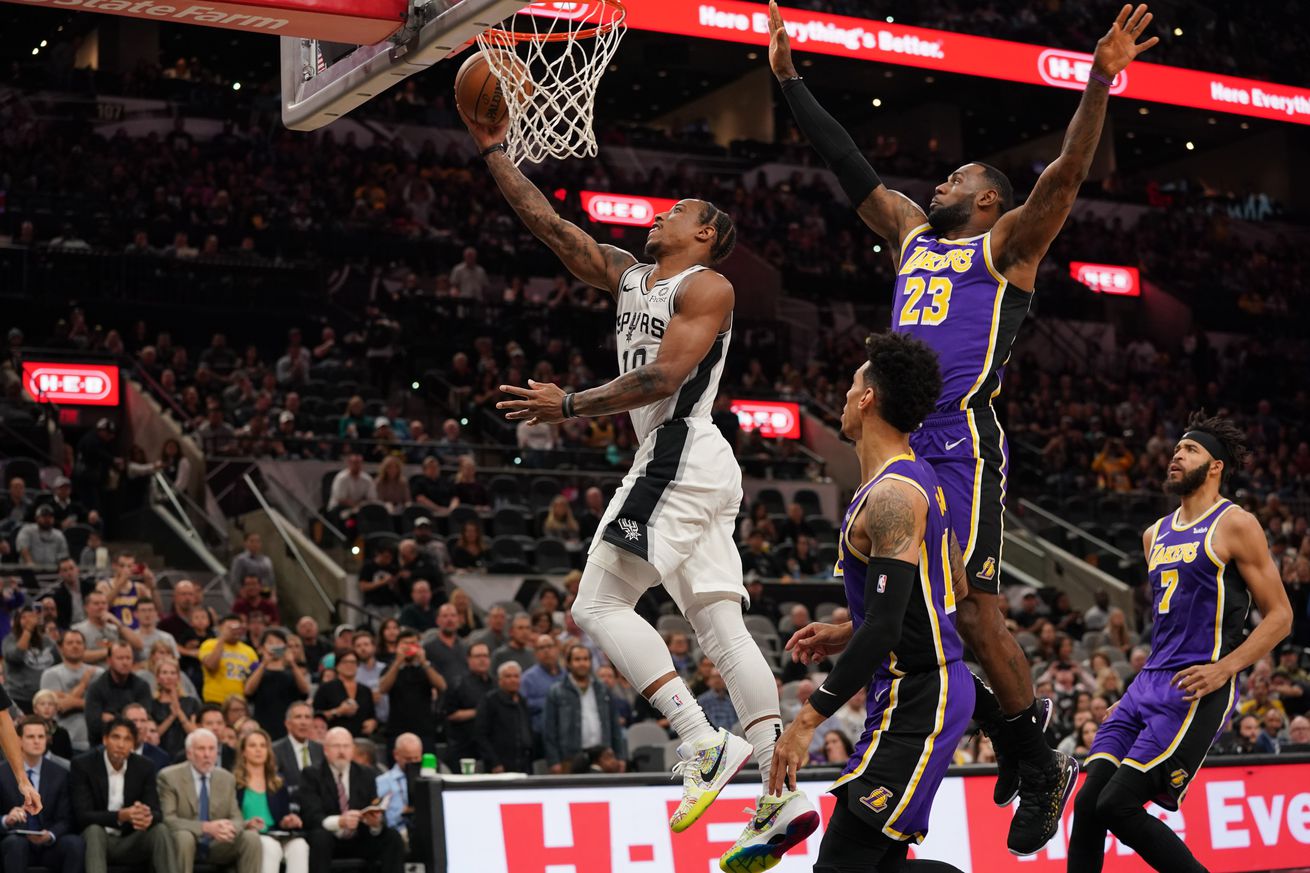 The Spurs can’t complete the comeback as the Lakers hand the Spurs their first home loss.

Dejounte Murray led a furious comeback for the Spurs in the fourth quarter to tie up the game late, but Kentavious Caldwell-Pope and Dwight Howard provided an unexpected scoring punch for the visitors to put it away as the Spurs just couldn’t hit their shots late. It was a solid effort for the Silver and Black, but defensive lapses let the Lakers take the win. The Spurs played their best defensive performance of the year for much of the game, but they weren’t consistent enough to earn a win against Anthony Davis, LeBron James and the talented Lakers.

The game started a bit slowly, DeMar DeRozan stole the tip and went to the basket, but his shot was blocked by LeBron James, although it looked like a goaltend to me. Bryn Forbes scored the first points on a triple, and a Trey Lyles dunk gave the Spur a quick 5-0 lead. The Lakers got back with a Danny Green triple and Avery Bradley’s basket to tie it up. The Lakers built up a 5 point lead before the subs came in for the Spur halfway through the quarter. The Spurs went on a late quarter run with their defense forcing Laker turnovers and missed shots, to trail 25-26 after one.

Dejounte Murray’s high banking layup gave the Spurs the lead at the start of the second quarter, soon to be extended by a deep Rudy Gay three-point shot. The Lakers used their size and strength advantage to regain the lead with a Dwight Howard putback of a LeBron James miss to lead 32-31. Anthony Davis got hot, and the Lakers had a dominant quarter, leading 56-43 with a Kyle Kuzma half court banker at the buzzer delivering the coup de grace.

Avery Bradley started off the second half to extend the Lakers lead to 15, and the Spurs shooting woes continued, as Davis was able to get the hoop easily and put the Spurs down by 19. The Spurs finally started to show signs of life, by forcing turnovers and DeMar getting to the basket to fuel a 6-0 run midway through the quarter. The good guys found their intensity on both ends of the court, and with Derrick White’s floater with 3:33 left in the third, the Spurs only trailed by six, 71-65. Finally, Rudy Gay returned Kuzma’s favor by hitting a buzzer beater three at the end of the third for the Silver and Black, and the Lakers led 77-72 after three. The Spurs outscored the Lakers 29-21 in the third.

The play started off pretty even for both teams, but a hard foul by Dwight Howard sent Derrick White careening into the court with 10 minutes left, but somehow it was only called a common foul. It looked pretty dirty to me, and Derrick went to the locker room shortly after taking and hitting his free throws. Howard went on a bit of a tear after that, hanging on the rim and taunting with impunity. The Spurs weren’t done, and with a Dejounte Murray steal and breakaway dunk, the deficit was cut to four, and then to two with a halfcourt basket from Murray with half of the final quarter still to play. Murray wasn’t done, and he tied it up at 90. Unfortunately for the good guys, Kentavious Caldwell-Pope went on a run of his own, and put the Lakers up 95-90 in the wink of an eye. The Spurs had opportunities to extend the game, but the shots didn’t drop and they could not pull out the win. Great effort, but it was not as good as it needed to be to overcome a talented Lakers squad playing at their peak.

For the Lakers fan’s perspective, head over to Silver Screen and Roll.

The Spurs are 4-2 on the season, and are tied with four teams for fourth place in the west. The Spurs travel to Atlanta on Tuesday to face Trae Young and the Hawks at 6:30 PM.