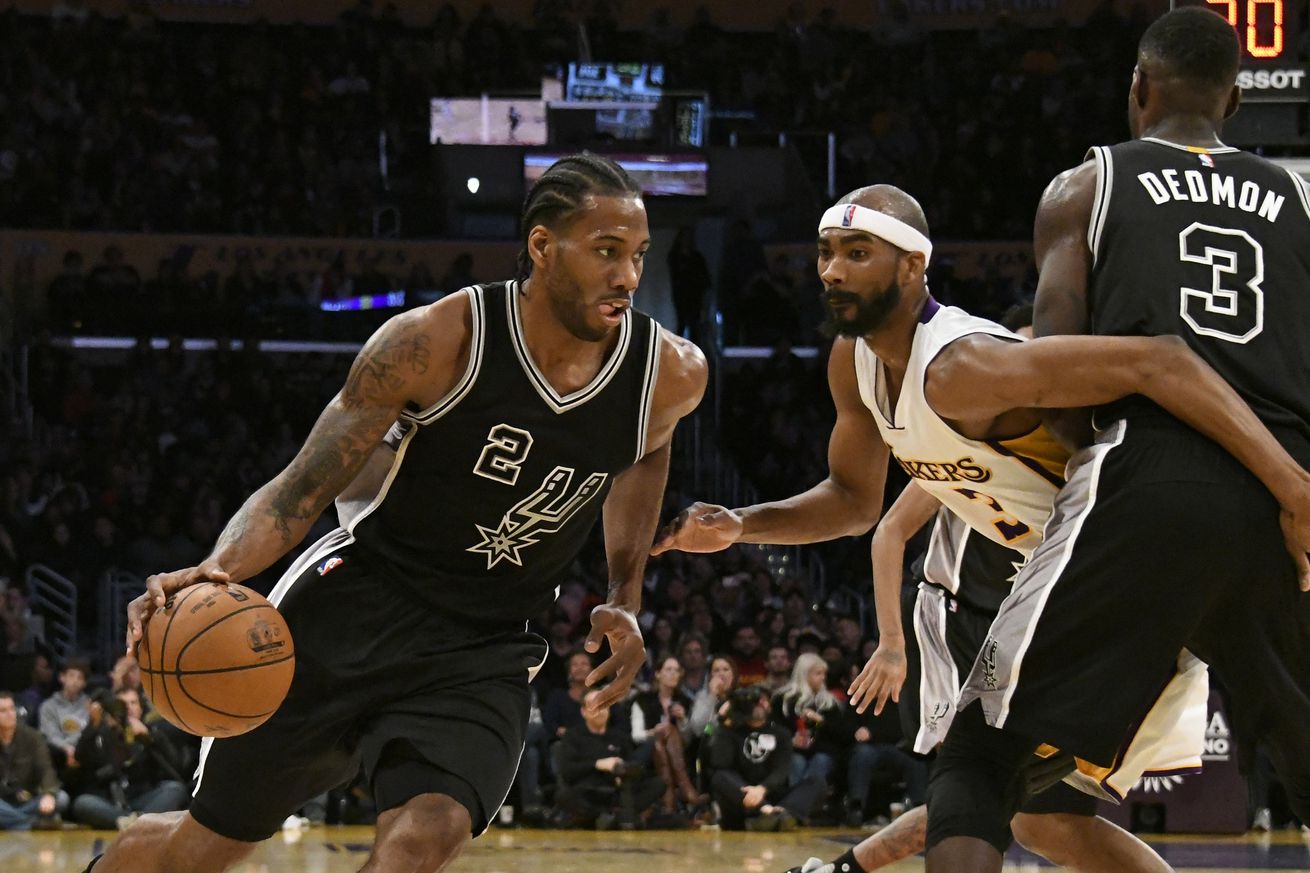 The Spurs finish the Rodeo Road Trip with a throttling of the tanking Lakers.

The old saying by now is you don’t want to face Kawhi Leonard when he’s mad. Coming off a subpar performance in Friday’s win against the Clippers, that saying remained true as he helped lead the Spurs to a one-sided blowout of the young LA Lakers in a Sunday matinee to end the 2017 Rodeo Road Trip.

The Spurs opened the game with an alley-oop dunk from Tony Parker to Dewayne Dedmon. After the Lakers briefly took a 5-4 lead, the Spurs went on a 9-2 run and never looked back. A driving Dedmon dunk off a line-drive pass from Manu Ginobili stretched the lead to double digits for the first time at 22-12. Pau Gasol put on a show for his old team with two quick threes and a block off the bench, but the story of the quarter was Leonard, who came out red hot and hit an array of shots on his way to 16 points on 6-8 attempts. The Spurs led 36-20 at the end of the first.

The Lakers opened the second quarter with four quick points from San Antonio-native Jordan Clarkson, leading to an early timeout from Pop. Ginobili responded with a three, and the Spurs were back to dominating. Another Dedmon slam on a putback and Parker jumper gave the Spurs their largest lead at 47-28 with seven minutes left in the half. At one point the Spurs were shooting almost 64%, and inevitabllay that fell off a bit, but they continued to play good defense and finished the half up 61-41 on a LaMarcus Aldridge buzzer-beater. Everyone who played scored in the first half, and the Spurs had 20 assists on 26 made FG’s.

Pop again called an early timeout two minutes into the third quarter after Nick Young got away for a transition dunk. A four-point play by Young got the Lakers within 17 at 67-50, but that was as close as they would get. The Spurs responded with a quick 6-0 run to stretch the lead to 23 on a Danny Green transition dunk. The lead remained in that range until a Manu three stretched it to 26 with just over a minute left in the quarter, and the Spurs headed into the final frame up 96-70.

The Spurs opened the fourth quarter with yet another Dedmon alley-oop, this one from Patty Mills, and Dejounte Murray entered for his first chance at double-digit playing time in over a month. Things got a little sloppy as the Lakers got within 22, but Pop still felt comfortable emptying his bench with just under eight minutes left. Murray showed off some of his skills with four nifty assists, and the Spurs cruised to a 119-98 win to finish the Rodeo Road Trip 6-2.

Check back later for more on this one. The Spurs return to San Antonio to take on the Indiana Pacers on Wednesday at 7:30pm.