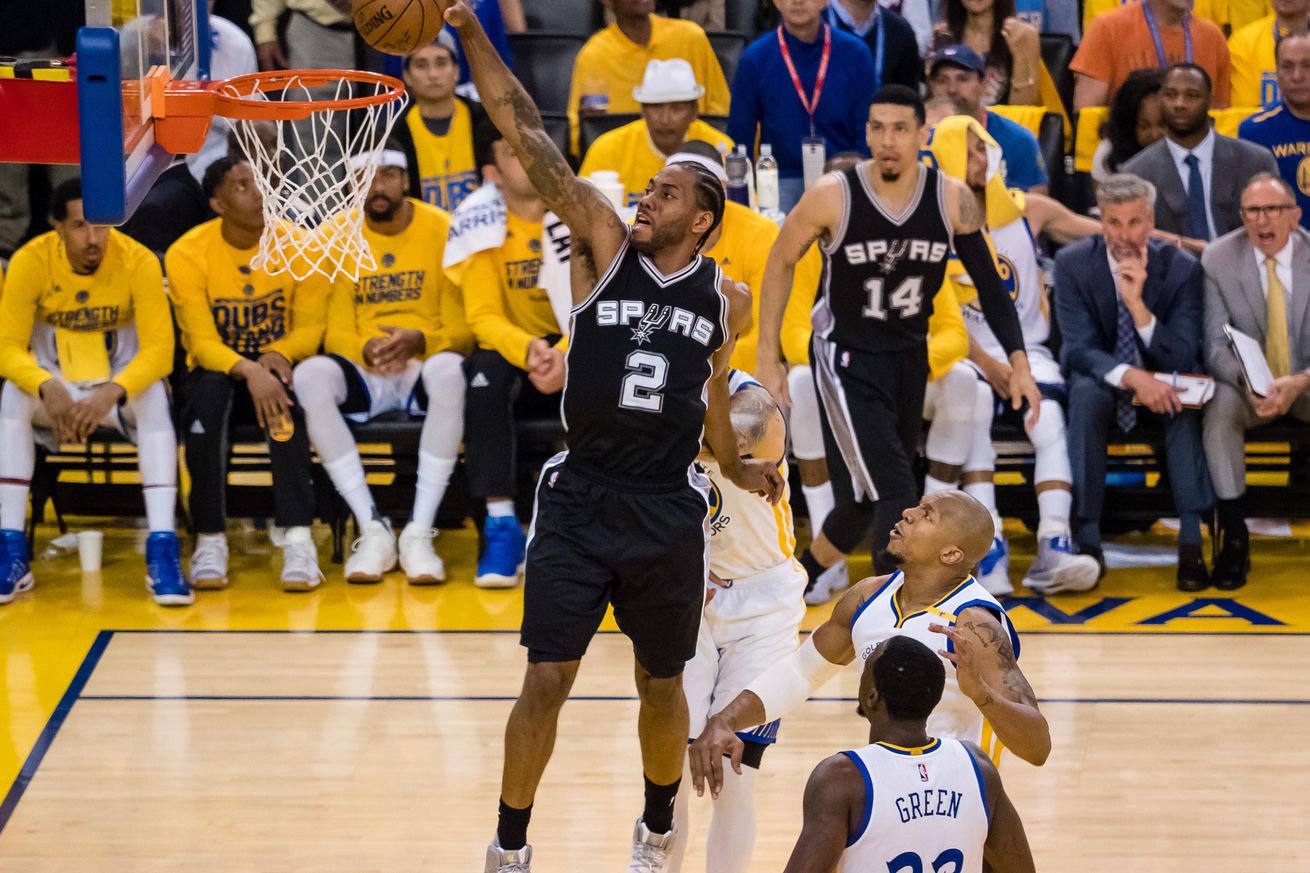 The Spurs started as well as possible but couldn’t hold off the Warriors after losing Leonard in the second half.

The Spurs started Game 1 of the Western Conferene Finals looking like it was still Game 6 vs. the Rockets. They thoroughly dismantled the Warriors in the first half and looked well on their way to holding off any second half run that might be coming before their worst nightmare came true: Kawhi Leonard retweaked his ankle twice in the third quarter, the second time with the Spurs up 23 and in control of the game.

The Spurs unraveled after that, and without their best defender and scorer they couldn’t stave off the Warriors despite holding on to the lead for most of the second half. It was a valiant effort by the undermanned underdogs but leaves a lot of questions not only about what could have been, but also what happens now, with or without Leonard.

Kawhi Leonard’s ankle looked fine from the start, as he hit a driving pull-up jumper on the Spurs first make and later a high-flying dunk. The Spurs got out to a quick 5-0 lead before the Warriors responded with an 8-0 run. LaMarcus Aldridge used his size inside to get the Spurs back on top and had 11 points in the quarter. In a good offensive rhythm and in control of the pace, the Spurs went on a slow, methodical 25-8 run of to take a 30-16 lead at the end of the first quarter. The Warriors looked rusty and out of sorts, while the Spurs defense and ball movement was fantastic.

The bench was a little sloppy to start the second quarter on offense but continued to defend well. Manu Ginobili hit first three-point attempt of the game, and Leonard followed with baseline drive to give the Spurs an 18 point lead. After a Warriors timeout, Manu scored another four straight points on a freethrow and an and-one off a steal. The Spurs got the lead as high as 25 at 46-21 before the Warriors went on a 11-0 run, spearheaded by a wrong offensive goal-tendeding call on the Spurs and capped by David Lee throwing the ball away on an inbounds for a Steph Curry three. Leonard responded by getting aggressive on the glass and driving to the rim. The Spurs managed to slow the pace back down for the remainder of the quarter and led 62-42 off a Danny Green three to end the half. Leonard and Aldridge led the Spurs with 19 and 17 points, respectively.

The Warriors scored four quick points to start the third quarter and in all started with a 7-2 run Leonard speared to retweak his ankle after a hitting a three, and Pop quickly subbed him out for Jonathon Simmons. Curry hit a three in transition, and Pop angrily called a timeout with the Spurs still up 75-55 but staring to show cracks on defense. Leonard returned but quickly went down again after Zaza Pachulia stuck his foot under him as he landed on a jump shot, and he exited for the remainder of the game. The Spurs were all out of sorts after losing their best defender and playmaker, and the Warriors went on an 18-0 run after Leonard’s exit to to get back within four, 78-74, before Aldridge finally broke the ice with a jumper. The Spurs recovered just enough to keep up and led 90-81 off a Kyle Anderson putback at the third quarter buzzer.

Simmons opened the fourth quarter with a jumper to get the lead back to double digits before Ian Clark responded with a three. The Spurs went back to controlling the pace and managing the ball well but still struggled to score. Two straight buckets by Durant got the Warriors back within four with 7:20 left, forcing a Pop timeout. Without Leonard, Durant feasted on the Spurs smaller defenders and gave the Warriors their first lead since early in the first quarter, 101-100, with 4 minutes left.

The Spurs regained the lead on an Aldridge jumper off a steal. Two Simmons freethrows got the Spurs lead back up to three, before the Warriors scored 8 straight for their largest lead of the game of five with 0:38 left. Ginobili responded with dunk, and Patty Mills stole the inbounds pass and hit two free throws to get the Spurs back within one with 0:32 left. Curry hit a two-pointer and Aldridge missed the three. Mills got fouled on offensive rebound but down three with 0.5 sec left. He hit the first freethrow, but the Spurs couldn’t get the tip in on the purposeful miss, and the Warriors won 113-111.

Check back later for more on this one. Game 2 will be on ESPN and tips off on Tuesday, 8:00PM back at Oracle Arena.