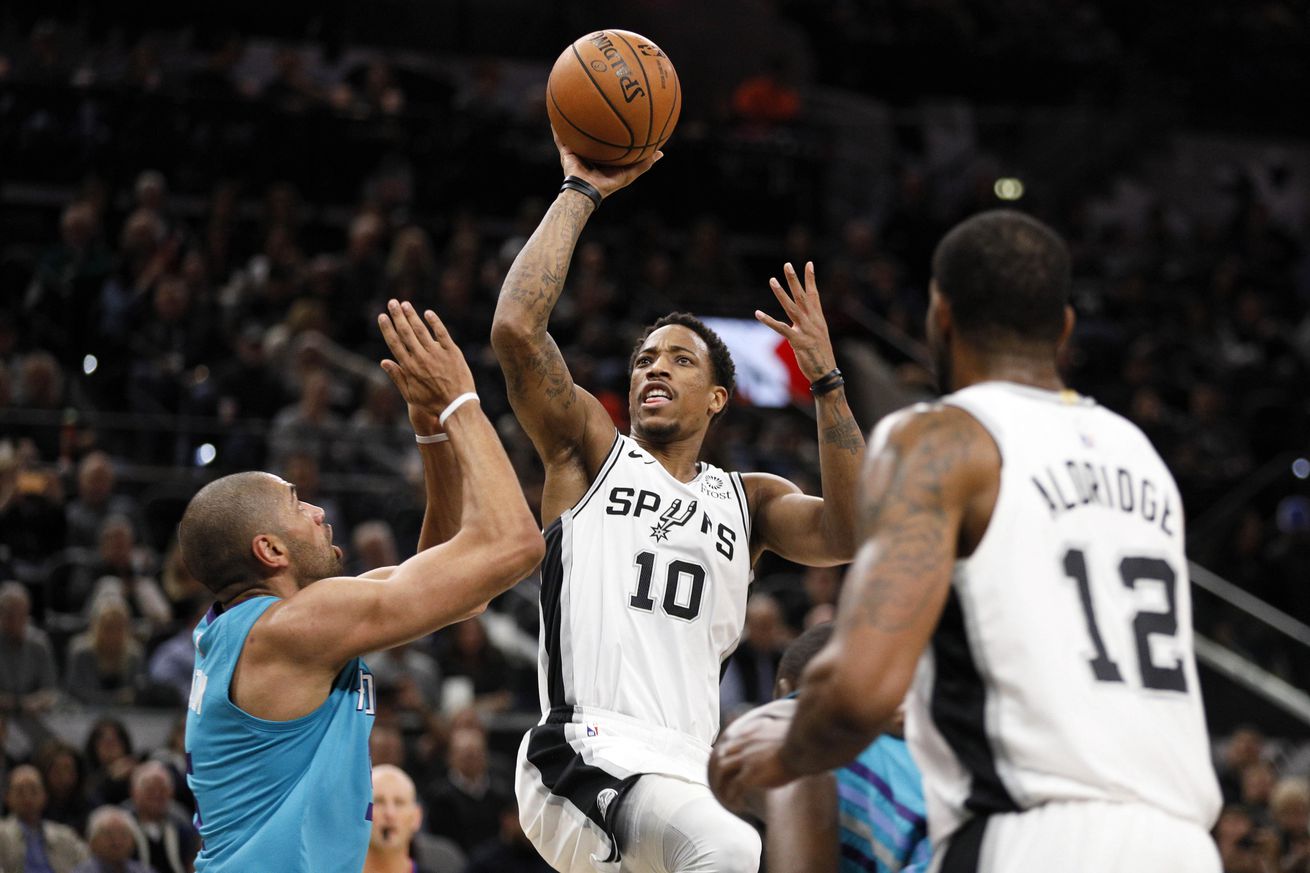 Much like the I-35 drive from San Antonio to Dallas, the Spurs started slow, kicked it into gear throughout the majority of the middle portion, only to slow back down in the final moments. Regardless of the ride that got them there, the Spurs reached their goal, defeating the pesky Mavericks 105-101 on the road. The Spurs hold 6th seed in the Western Conference at 26-20, and are now 8-14 on the road. The Mavericks drop to 20-24 on the season and 16-6 at home.

Though the Spurs’ starters have been getting off to slow starts lately, I had been attributing the slow starts to not having Rudy Gay in the starting lineup. Prior to tonight’s game, the starting lineup of White, DeRozan, Forbes, Gay, and Aldridge had a +6.2 net rating in the first quarter. With that in mind, it was shocking to see the Mavericks race out to an 23-4 lead to start this one. I guess it shouldn’t have been shocking considering they played like a team looking to get blown out. Here’s my getting-blown-out-on-the-road checklist:

A couple of those are enough to lose on the road, but the Spurs were guilty of all of them tonight. Once the reserves entered the game, the Spurs at least started to play with some semblance of energy. The bench unit hit a few three pointers to crawl back into the game, but were unable to maintain the momentum throughout the rest of the quarter. After all was said and done, the Spurs found themselves down 20-35 heading into the second quarter.

Patty Mills started looking like Kawhi Leonard in the second quarter, stealing the ball twice using his massive wingspan and gigantic hands. Ok, the first part of that sentence was true. Well, kinda, but not really. The first steal resulted in a Mills layup instead of a thunderous dunk. The second steal ended in an Aldridge offensive foul – his third foul of the half – because Mills was unable to outrun his chasers in open space. Instead of trimming the lead down to 11, the Mavericks were able to push the lead to 15, and Aldridge had to sit the rest of the half. I’m giving Mills a hard time, but he played with incredible energy tonight, as he does most nights.

Marco had several opportunities to get the Spurs within a single digit deficit in the second quarter, but was unable to get it going. Marco may have rushed a few possessions, but it’s hard to blame him given how the night had gone up to that point. The Spurs still ended up winning the second quarter, and found themselves down 45-56 heading into the second half. The bench unit was once again the main reason the Spurs were within shouting distance.

The same starting lineup that went down 4-18 in the first half went on a 6-0 run in the second half. Here’s my analysis of the turnaround: the Spurs stopped doing those things they were doing in the first half that lead to blowouts on the road. Unfortunately, Aldridge was taken out of the game early in this one, getting his fourth foul three minutes into the third quarter. At least two, and possibly three, of his fouls were bogus.

Shortly after, Rudy Gay and Wesley Matthews ran into each other’s knees; always a scary thing to see on the court. Both players were able to continue playing though. We really need Rudy Gay healthy and on the court. When healthy, Gay was playing exceptional basketball and the Spurs were looking like a contender. Without him, the Spurs were looking vulnerable as they do not have a viable backup at his position. Rudy Gay Missed a series of open looks in the paint in the first half. He was clearly rusty after not playing for five games, but he continued working hard, and some of those shots started to fall in the second half. He finished the game with 14 points on 11 shots. Not bad for a rusty Rudy.

There’s a silver lining for everything. With Aldridge benched early, the rest of the third quarter became exhibit A of Jakob Poeltl’s usefulness on the court. The Mavs continued to try to pull away from the Spurs, but Poeltl’s work on the offensive glass resulted in seven second-chance points during this span, keeping the game within reach. The Spurs pulled within two with just seconds to go in the third quarter, but Belinelli sagged way off Finney-Smith, and he was awarded with a wide open three pointer as the shot clock expired. As a result, the Spurs entered the fourth quarter down five.

The Spurs went on a 7-0 run to start the fourth to give them their first lead of the game at 82-80. The next few minutes of action was a mind-numbing back-and-forth affair, with both teams firing from deep at will. With the game tied at 90, DeRozan took over, for better or worse. He hit two jumpers – a sight for sore eyes – then broke down the defense, leading to an Aldridge layup. The Mavs called a timeout with the Spurs up 6 with 5:30 minutes to go in the game. At that point the Spurs went cold, with both Aldridge and DeRozan missing shots that could have sealed the deal for the Spurs. Tied at 96 a piece, the Spurs remembered what got them back into the game in the first place, and DeRozan found stone cold killer Davis Bertans for an open three pointer. The Mavericks fought hard, but were unable to come back from that point, and the Spurs won a tough one on the road.