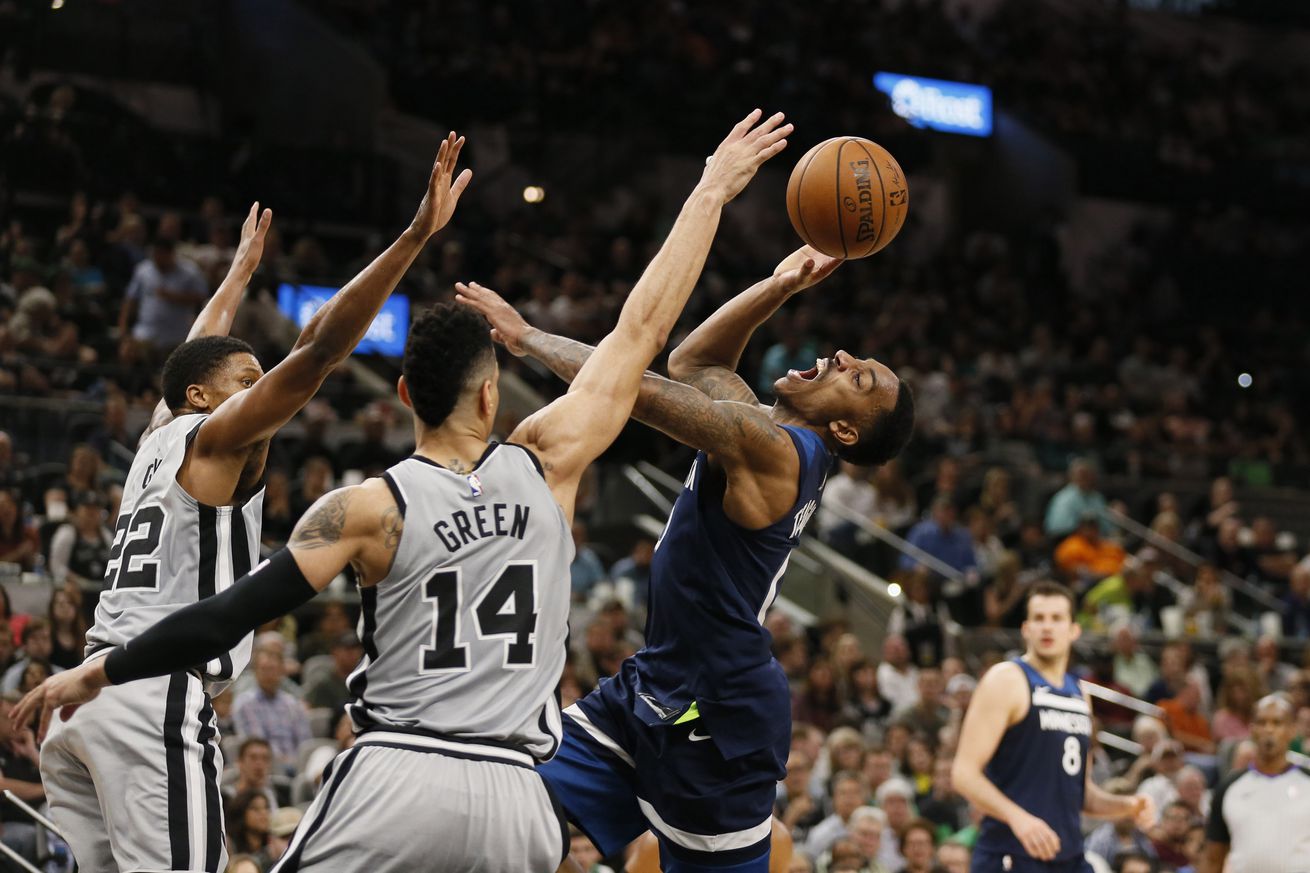 Spurs continue their march to secure their playoff position with a win.

Missing their star – Jimmy Butler – the Minnesota Timberwolves came into the AT&T Center on Saturday night in 5th place. The San Antonio Spurs were missing their superstar – Kawhi Leonard – and in 8th place. The Spurs knew that beating the T-Pups meant that they would pass them in the standings due to owning the tiebreaker (series record 2-1 with tonight’s win). Head coach Gregg Popovich went with a repeat starting lineup with Dejounte Murray, Patty Mills, Danny Green, Kyle Anderson, and LaMarcus Aldridge against the Timberwolves’ Nemanja Bjelica, Taj Gibson, Karl-Anthony Towns, Andrew Wiggins, Jeff Teague. With the AT&T Center rocking the Drop Kick Murphys for St. Patrick’s Day, the Spurs set to work to sham-ROCK the Wolves.

The Spurs got the tip, but their first possession ended with a turnover, a possible sign of the path this quarter would take. But then Danny Green hit a corner three. KAT responded with a big dunk. The first half of the quarter was rough, with the Silver and Black defense letting the Wolves get their offense going while the Spurs offense was dismal – in the first 6 minutes of the quarter, the Spurs were shooting 18.2%. Aldridge was aggressive in the post, but he just wasn’t hitting anything (going 0-5 early on).

It looked like the Spurs offensive engine was trying to rev up after a Green tip-in dunk off an LMA miss, but the Wolves continued to keep the lead just out of reach. Pop substituted his bench, inserting his three Hall of Famers – Tony Parker, Manu Ginobili, and Pau Gasol. That’s when the offense started to click as the Spurs went on an 8-0 run at the end of the quarter. The quarter did see a Derrick Rose sighting at 1:32 left in the quarter, just when the Spurs started to roll. By the end of the first round, the Spurs’ field goal percentage was up to 33%, but the Wolves were shooting 47%.

The 2nd quarter started where the 1st ended with the bench keeping up the pressure, fighting for defensive rebounds, and hitting buckets. A Rudy Gay layup got the Spurs the lead at 27-26 and then Parker hit his patented teardrop to increase the lead by another 2. Just like that, the FGA was up to 40%. The defense looked tighter, the offense was aggressive, and more importantly, the shots were falling. One area causing problems was the high screen and roll Minnesota was running. The Wolves kept catching Spurs guards in those, leaving them stuck on a big, usually leading to a T-wolves score. But LMA kept fighting under the basket, attacking KAT, especially on the perimeter, and suddenly he was hitting shots. That’s when Aldridge took off. He got 18 points in the quarter, staying forceful. In one possession LMA was triple teamed, gave his defenders two pumpfakes, before hitting the shot and getting an and-1.

LA scored 18 points in the 2nd quarter, his second-highest scoring quarter as a Spur #GoSpursGo pic.twitter.com/WayJXag8kJ

By the end of the quarter, the Spurs were shooting 54%.

The second half didn’t pick up where the first half left off. The Spurs defense was too loose and their offense seemed stuck, with guys dribbling the ball on the perimeter for too long during possessions. The good guys appeared to forget how they got the lead. The Timberwolves kept chipping away at the lead, and by mid-quarter the lead was down to 7. The Spurs continued to fight for defensive rebounds and got some blocks (even though a couple didn’t count due to fouls), but it was the veteran play of Parker, Gasol, and Manu Ginobili that helped keep them in the lead. At 4:54 left in the quarter, Ginobili charged into the paint and got a soft layup, which was followed by a vintage Parker spin move around Tyus Jones for another bucket. LMA continued in beast mode under the basket for offensive rebounds, to give the Spurs second chance points. In the last couple of minutes of the game, Manu was #StillManu with a Grandpa Juice dunk and by sacrificing his body to get a charge on Jones.

Manu with the dunk

Give him 10 points in the game #GoSpursGo pic.twitter.com/IsMdv4tlun

The quarter started to look like repeats of previous losses with the Wolves outscoring the Spurs in the early minutes, especially with Towns getting hot from outside to decrease the lead to 6 points. But then Rudy Gay came in to help LMA, and he fought for rebounds and had a big man dunk to bring the lead back to 10.

See the exciting conclusion to this one on @FOXSportsSW and #FOXSportsGO! pic.twitter.com/w7uDT2CPoK

Derrick Rose remained persistent and was hitting shots. But several huge Spurs rebounds and blocks led directly to scores, including a savage LMA dunk and a Tarheel Triple. And then the lead was back to 13, where it remained or increased for the rest of the game. The Silver and Black kept battling and limited the opportunities for the Wolves to get back into the game, something that has been an issue before.

See the exciting conclusion to this one on @FOXSportsSW and #FOXSportsGO! pic.twitter.com/w7uDT2CPoK

The Spurs continue their homestand and quest for the playoffs on Monday versus a three all-star down Warriors at 8:30 p.m.