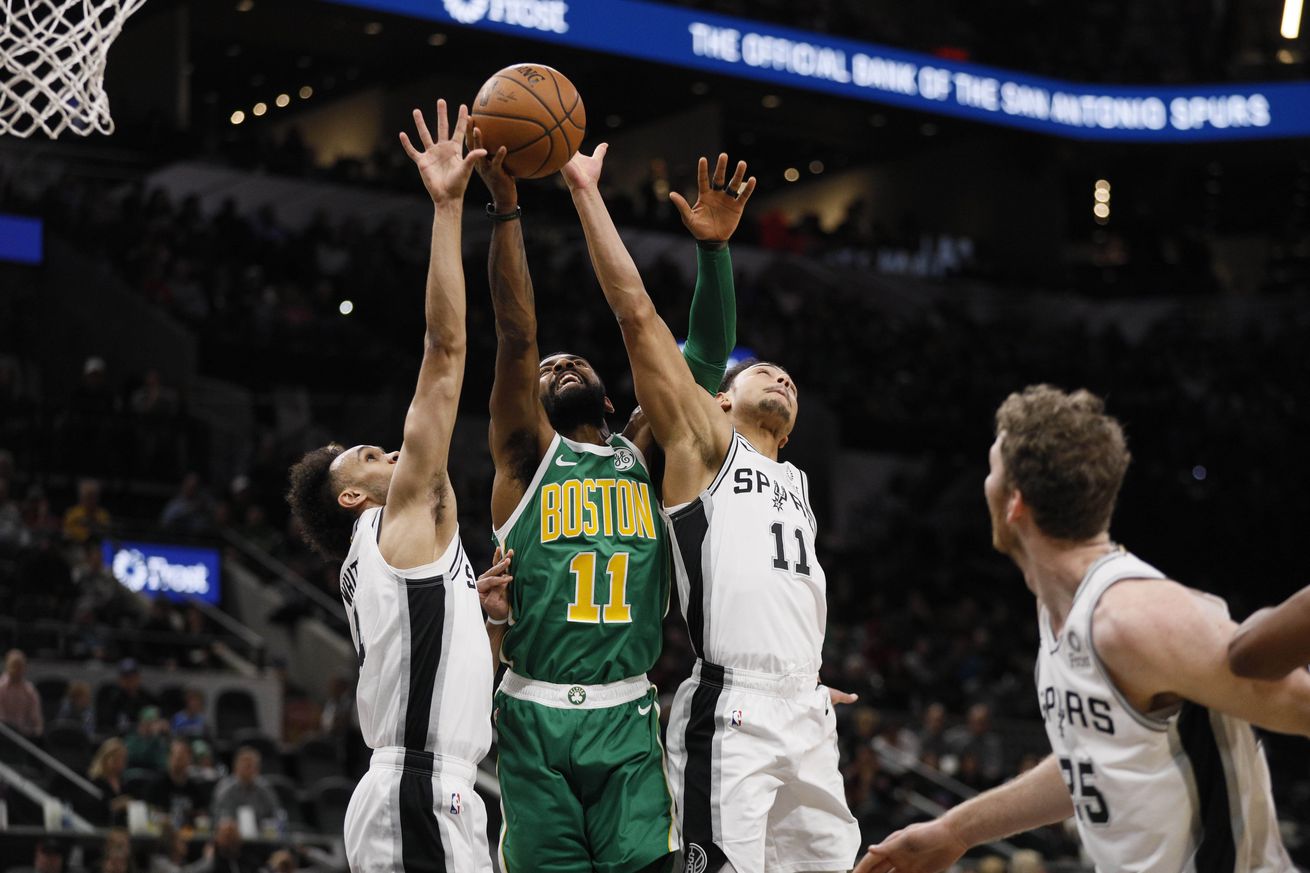 The Silver and Black started the party slowly, but started rockin’ it in the second half.

It’s New Year’s Eve and most people are writing resolutions or going to gatherings with family and friends. The Spurs started the party in San Antonio by beating the Boston Celtics.

The Spurs improved defense was markedly missing as the Silver and Black seemed slow on switches and defenders stayed too far off three point shooters. The Celtics got 6 of 17 from beyond the arc. As mentioned in the preview, Kyrie Irving and company can hit 3 pointers. Bryn Forbes, Derrick White, and Davis Bertans gave those shooters too much space and they took advantage. Patty Mills was struggling to find his shot, but defensively, he was harassing Irving enough to force him to give up the ball. On one occasion, Irving passed to Marcus Smart who was being guarded well by Forbes and Smart threw a bad pass ending up in Marco Belinelli’s hands. Belinelli passed to an open Bertans for a wide open three. Irving was held to 5 points in the half, but his teammates were hitting just about everything.

The positives were that LaMarcus Aldridge was making shots and had 15 points in the first half and Derrick White was continuing his “white” hot play (sorry, I had to). LMA and White’s play was especially important since DeMar DeRozan only had 4 points.

White was sustaining his high level, coming out at the start of the second half with 5 quick points – a smooth, multiple fake up and under 2 pointer and a swish 3. But Irving came out trying to make up for his cold first half and scored 5 points within a couple of possessions. At 5:42 of the 3rd, Spurs were up 69 to 67. The interior offense of the Spurs was awake and the defense was getting tighter – White had a sweet block on an Irving post up shot. The Celtics defense in the paint was crumbling and their shots stopped falling. At 2:56 in the 3rd, Patty Mills finally found his range, hitting a sweet three and his first points. The Spurs had opened up a large double digit lead that the Celtics started to close to single digits toward the end of the quarter until Belinelli and Mills hit threes. The Spurs scored 46 points in the 3rd (equal to their total in the first half). But Terry Rozier was getting warmed up and scored 9 of his 15 in the 3rd. Then Bertans and LMA helped to seal the deal.

The Spurs are off for a couple of days, which is good. It gives the good guys a chance to prepare for their next game on Thursday, January 3 against Kawhi Leonard and the Raptors at 7 p.m.