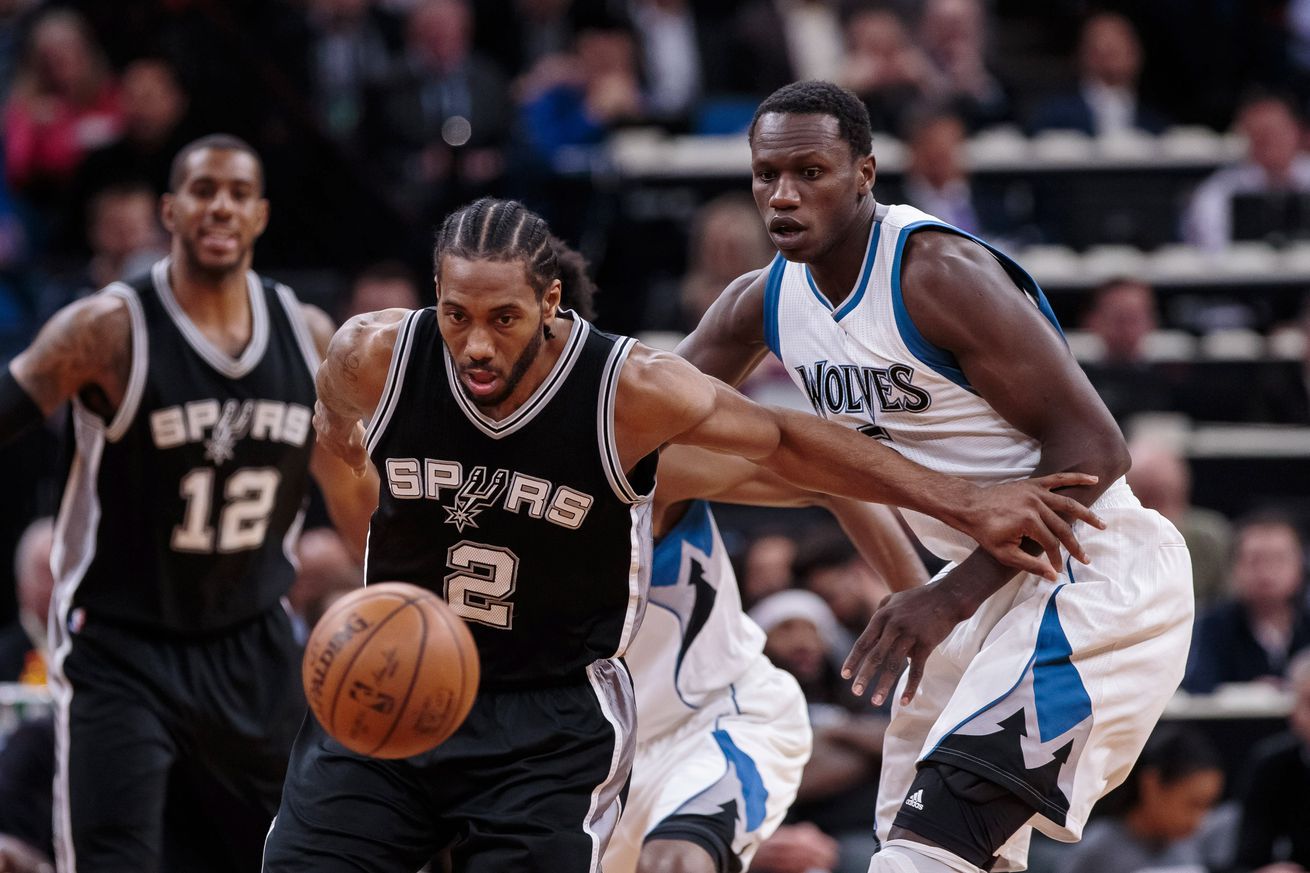 After a tongue-lashing at halftime, the Spurs came out strong in the second half for their second straight win.

The Spurs faced off against a young Minnesota Timberwolves club that is brimming with young talent but for all intents and purposes is out of the playoff race. The game followed both teams’ typical M.O. for the season, with the Wolves starting strong but unable to maintain a halftime lead, and the Spurs starting slow but coming out strong in the second half for the win.

Both teams started the game aggressive but unable to get much to fall. By the 7:30 mark the teams were shooting a combined 6-16 from the field with the Wolves up 9-7. From there the Spurs offense began to loosen up. After a couple of bricks from outside, LaMarcus Aldridge started attacking the paint with positive results. He was 6-9 from the field in the quarter, with five of those makes coming in the paint. The Spurs outscored Minnesota 12-0 on second chance points and led 25-23 at the end of the quarter. Aldridge led all scorers with 12 points while no other Spur hit more than one field goal.

The second quarter was sloppy for the Spurs. Shabazz Muhammad scored 10 straight points off of five straight turnovers, and Pop called timeout with 6:00 left and the Spurs suddenly down 40-30, with their only five points coming in the quarter from Pau Gasol. Manu Ginobili finally stopped the bleeding with a driving lay-up and floater, promoting a timeout from Coach Thibs. Four points by the Wolves, including a wide-open dunk by Muhammad, led to a Spurs 20 sec timeout with 3:15 left. Muhammad continued to torch the Spurs to the tune of 16 points in the quarter, and only a Jonathon Simmons buzzer-beating three prevented the deficit from being double digits at the half. Instead, it was “only” 51-42 despite nine turnovers.

The Spurs came out of the locker room with barely a minute left before the second half started, meaning they likely got a tongue-lashing from Pop, and it showed with an immediate increase in aggression and better ball movement. Kawhi Leonard, who had an extremely quiet first half with only two points, got a classic steal-and-slam, and that jump-started him and the team as a whole. It was Minnesota’s turn for a turnover fest, and the Spurs were back in front 60-58 with 5:18 left in the quarter. After getting zero free throws in the first half, their aggression earned them 16 in the quarter. There were several opportunities down the stretch to expand their lead further, but the Spurs still led 73-67 heading into the final frame.

Both teams started the fourth quarter on fire with Karl-Anthony Towns roasting the Spurs down low and several Spurs scoring in all manners. Both teams traded highlight reel dunks with an Andrew Wiggins dunk over Gasol and a put-back slam off a rebound by Simmons. It was still a close game with 3:23 left and the Spurs only up 92-88, partially thanks to the Wolves being in the bonus early. Minnesota scored five straight points to retake the lead on a questionable three-point play. Leonard hit a turnaround jumper over Wiggins with 0:54 left to regain a 94-93 lead for the Spurs. The Spurs got the stop on defense, and Gasol made both free throws with 0:35 left. Leonard stole the ball on the next possession and made his free throws, and the Spurs won 100-93, led by 26 points from Aldridge and 22 from Leonard.

The Spurs improve to 54-16 and remain 2.5 games back from the Warriors and the first seed. The Spurs return to the AT&T Center for seven of their next eight games at home, starting with the Memphis Grizzlies on Thursday.