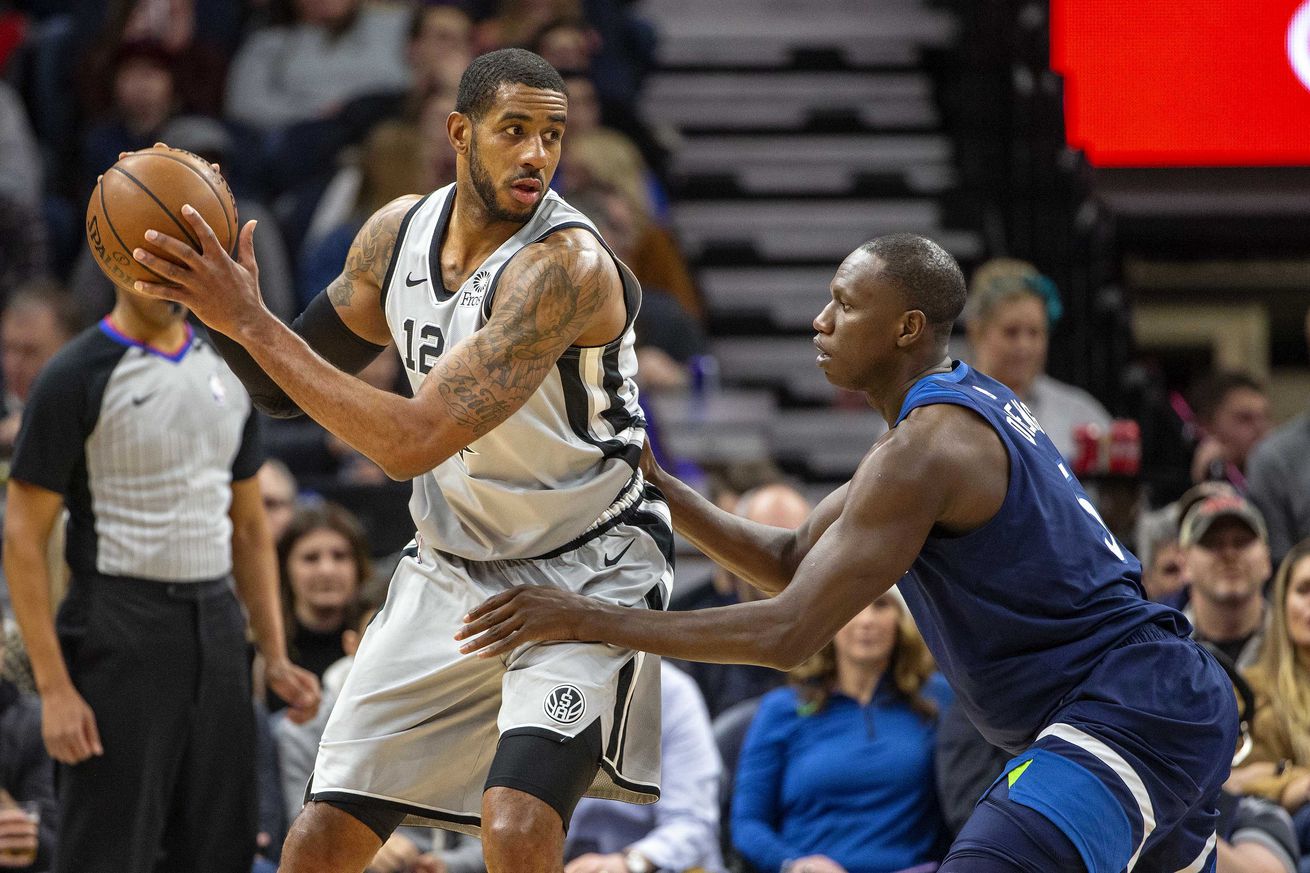 On Wednesday night, San Antonio methodically made its way back from down 23-4 to win 116-113 behind 25 from LaMarcus Aldridge, 22 from Rudy Gay and 19 from Marco Belinelli on a night when DeMar DeRozan didn’t play (left ankle). The Timberwolves kept it tight throughout, but the Spurs defense tightened when it matter and Davis Bertans made sure that Derrick Rose couldn’t kit a desperation three to tie at the final buzzer.

Minnesota came in smarting from a 42-point loss to Jimmy Butler and the 76ers. Pau Gasol instead of DeRozan and both teams came out cold from the field – combining to miss seven shots in a row and each missing four of their first five shots. Rudy Gay figured prominently on the first few possessions on a pull-up jumper and a pass leading to a Pau Gasol basket. However, Josh Okogie’s fast break dunk off of a Jeff Teague outlet led to a quick Pop timeout.

Andrew Wiggins chipped in seven of the Wolves’ first 10 points. Gorgui Dieng and Marco Belinelli (patented left-fading) exchanged 3 pointers midway through the quarter. Belinelli added to his personal 5-0 run with a lay-in off of a Gay inbounds. Dieng and Karl-Anthony Towns picked up their second fouls in a short span, leading to Taj Gibson playing center. In a sequence highlighting the tempo of the game, a chase-down Davis Bertans block of a 3 pointer fell fortuitously to Taj Gibson for a putback layup for yet another lead change.

Derrick Rose asserted himself later in the quarter with several drives and free throws. It was a back-and-forth period that involved 14 lead changes and seven ties total with no lead bigger than four points.

Gibson started the period strongly with six points (via post-up, tip-in, and jumper) and several offensive rebounds to extend the Wolves lead to seven. Bryn Forbes scored his first points on his 100th 3-pointer of the season to cut the lead to three. In the best Spurs sequence of the quarter, a fast break initiated by Belinelli to Patty Mills in the frontcourt led to a Bertans lay-up to slice the lead to four.

The Spurs went into the bonus halfway through the quarter after Dario Saric’s second foul and used free throw opportunities to offset spotty outside shooting and took back the lead briefly. Towns, with Jakob Poeltl guarding him, went into the post for a pair of made shots to take the lead back for the Wolves.

Late in the period, a Gay offensive rebound and kickout to Patty Mills for a three pointer gave the Spurs their biggest lead at 58-53. However, Towns (14 points all in the second) drew a dubious third foul on Poeltl with 0.6 seconds left and tied the game in a half that also had 19 lead changes. LaMarcus Aldridge started the game shooting 2-11 from the field.

Towns scored five points in a row – only to pick up his third and fourth fouls two minutes in. Gay responded with two jumpers to regain the lead for the Spurs. The Wolves responded with a 14-1 run. In a failed attempt to switch with Gasol on the perimeter, Forbes fouled Josh Okogie on a closeout to give him three free throws and push the Wolves ahead 70-67. Okogie added a 3 from the opposite corner to boot. Gay scored the team’s first bucket in 4+ minutes to trim the lead to eight.

The Spurs pushed back with a 9-2 run with several Aldridge and Gay scores capped by an acrobatic putback by Dante Cunningham. For the quarter, Dieng accumulated his fifth foul with Towns getting his fourth, while Gibson had three. There were two rare defensive three second calls on both teams, as well.

Mills’ seventh assist to Cunninham put the Spurs up by three. However, Rose closed out Minnesota’s period with six points of his own. To this point, there were 25 lead changes and 16 ties between the two highly competitive teams.

Bertans’ 3rd three pointer put the Spurs up yet again by one. The Spurs defended well off of two Wolves offensive rebounds to force a shot clock violation. A Rudy Gay 5-0 run put the Spurs back up by one, which also resulted in Towns’ fifth foul on an and-1.

Mills paired an assist for a Poeltl layup and charge taken on Teague with Aldridge’s putback to supply the Spurs with their largest lead of the night (103-96). Teague strung together three Spurs fouls in succession after receiving a technical. Both teams exceeded 30 free throws on 50+ foul calls, and the Wolves seemed to take full advantage of those chances to keep things close.

A kickout from Aldridge to White resulted in an open three to make it 108-101. The Spurs missed an opportunity to extend the lead to nine on offensive goal-tending and the Wolves responded with a pair of baskets by Towns and Wiggins. Towns picked up his sixth foul against Aldridge on high-low action with Gay and LMA added a turnaround baseline jumper to make it 112-107. Rose added six points – around a Gay baseline jumper – on increasingly more difficult shots to pull the Wolves within 114-113.

A controversial review on a Gay/Saric loose ball situation gave the Spurs the ball back with 5.8 seconds left. Two Belinelli free throws pushed the Spurs up by three. Minnesota’s last opportunity came down to a tightly contested fadeaway three by Rose that fell short.

The Spurs improved to 9-14 on the road and return home to face Lou Williams, BOBAN MARJANOVIC, and the Los Angeles Clippers on Sunday at 6:00 PM CDT. Let’s all catch our collective breaths and have a great evening!