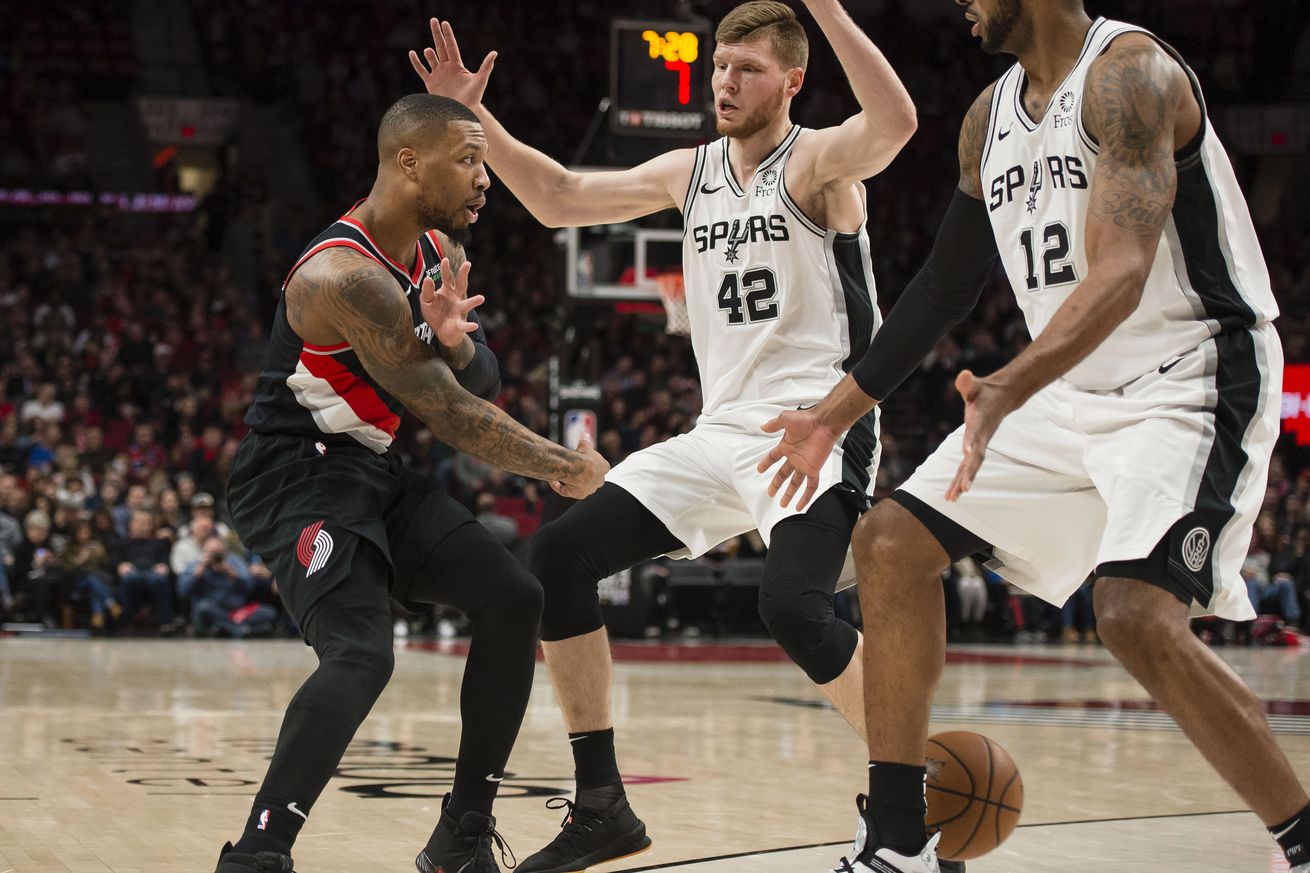 The Spurs faced a team tonight that took the game away from them with superior effort and smarter play. Rudy Gay made a game of it in the third quarter with a magnificent scoring run to help the Spurs tie up the game, but the Silver and Black could not match Portland’s intensity as they pulled away in the fourth by diving for loose balls and hitting clutch shots. CJ McCollum and Damian Lillard took over the game, and they also got great contributions from Jusef Nurkic and Jake Layman. DeMar DeRozan had a big night scoring, but his 5 turnovers were a key factor in the loss.

The Spurs started off fast with a Bryn Forbes triple and a pair of LaMarcus Aldridge jumpers. Damian Lillard and the Blazers were able to keep it close as the Spurs led 23-21 with 4 minutes left in the first with Nurkic doing damage in the paint and feeding Layman for finishes at the rim. Spurs turnovers were costly, but a strong finish to the quarter with a Patty Mills three, and an and-one from Aldridge had the Spurs ahead by six, until C.J. McCollum’s buzzer beater triple cut that in half to set the first quarter at 34-31, Spurs.

The Blazers were shooting the lights out to start the second quarter with Rodney Hood getting into the action with 9 quick points. Jakob Poeltl made an impact for the Silver and Black with getting to loose balls and taking over the paint. Late in the quarter, the Spurs slumped a bit, and the Blazers built a 13 point lead converting Spurs turnovers into Portland points on a 21-6 scoring run. An ill-advised foul on Al-Farouq Aminu by Davis Bertans gave Portland the last three points of the quarter as they led 70-57 at the half.

The Portland dominance continued as the third quarter began, and after a thunderous dunk by Mo Harkless was followed by a wide open triple from McCollum, Gregg Popovich called an early timeout with his team down 78-59. The Spurs blindly stumble though the game until finally, Rudy took over and went on an 8-0 scoring run to cut the lead to 13 halfway through the third. A Portland timeout couldn’t cool him off as Gay cut the lead to single digits, hitting one clutch shot after another. His run was finally stopped by Popovich, who subbed Dante Cunningham in for him late in the quarter. The Spurs finally tied it up with 2 minutes left in the quarter on a DeMar DeRozan banker. Damian Lillard outscored the Spurs 8-2 in the last two minutes, and the Blazers led 96-90 after 3 quarters.

Forbes hit a shot to start off the final quarter for the Silver and Black. After LaMarcus could not make a putback, the Blazers got a run out for a deep McCollum three to extend the lead. The Spurs dived for loose balls, but the Blazers were just a little quicker and maybe a big more lucky as they got to the loose balls first and turned them into easy points, once again leading by double digits with 7 minutes left in the game. The teams played pretty evenly until Pop put in the white flag unit with Drew Eubanks and Chimezie Metu with 2 minutes left as the Spurs lost 127-118.

Road trips are stressful. You need to relax.

The Spurs are now 32-24 and in 6th place in the west. They have lost their last three games and are 0-3 on this year’s Rodeo Road Trip. The Rodeo Road trip continues with an afternoon game against the Jazz at 4:00 on Saturday.