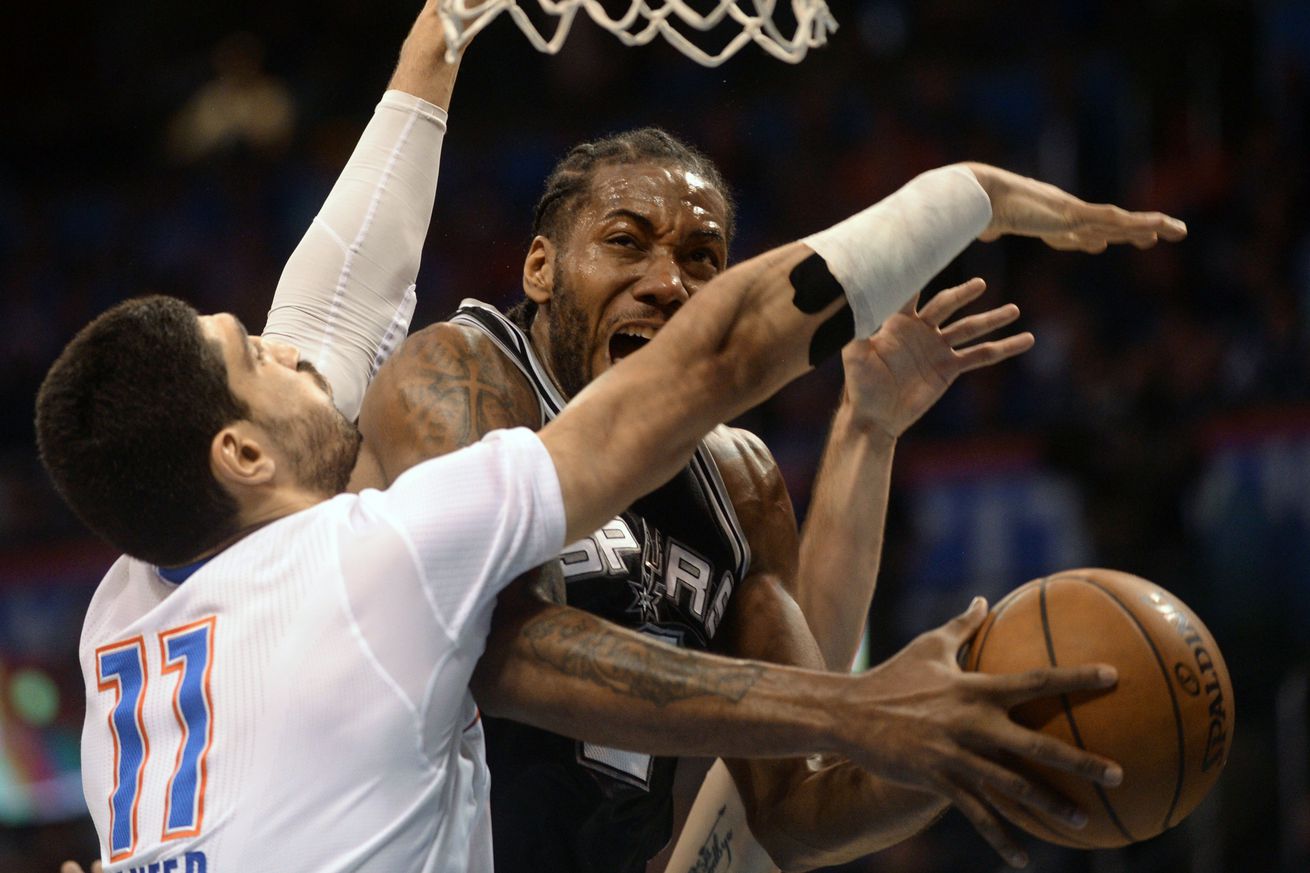 The short-handed Spurs ran out of comeback magic in a loss to the Thunder.

The Spurs took on the Oklahoma City Thunder on the second night of a back-to-back without Manu Ginobili (rest), Tony Parker (back spasms), and Kyle Anderson (leg): arguably their three best ball-handlers. Their presence was clearly missed as the offense failed to ever get in any kind of a rhythm, and the Spurs lost in their first game since before the All-Star break, ending their nine-game winning streak.

Dejounte Murray got the start in Parker’s place and immediately crossed up Russell Westbrook for a lay-up. Both Kawhi Leonard and LaMarcus Aldridge appeared fresh early after taking last night off, scoring six apiece to give the Spurs a 14-10 lead five minutes in. The Thunder responded with a 9-0 run, leading to a Spurs timeout with 4:15 left. After getting down by as much as seven, Pau Gasol scored nine points to keep things close, and in a pleasant change from recent trends, the Spurs ended the first quarter only down by one, 28-29.

However, the Spurs failed to take advantage of Westbrook being on the bench and started the second quarter sloppy and cold, missing eight of their first nine shots and committing five turnovers as the Thunder raced out to a 44-32 lead with 5:50 left. The Spurs started shooting better after that but still had trouble on defense, allowing OKC to shoot 51% from the field. Both teams traded buckets down the stretch, and the Spurs entered the half down 56-49. Gasol led the Spurs with 16 points while Leonard had a relatively quiet 14 points.

Pop immediately called a timeout to start the third quarter after a bad pass by Danny Green led to a transition lay-up for Andre Roberson. As the Thunder rebuilt a double-digit lead, Green showed a rare bit of emotion and shoved Steven Adams after he was shoved in the back and elbowed in the neck, resulting in a double-technical for both. Green immediately responded with a four-point play after Adams fouled him on a three, but that would be about the last positive moment for the Spurs. Pop nearly blew a gasket himself after a Victor Oladipo three-point play that likely would have been a shot-clock violation had it started on time. Davis Bertans came in and hit a three and provided some decent defense, but the Spurs never got closer than seven after that and entered the final frame down 82-71.

OKC’s bench continued to abuse the Spurs to start the fourth quarter, quickly getting up by 14. It was more of the same from there, with the Spurs looking gassed after last night’s huge comeback. This looked like a game that Pop was willing to throw away and prepare for the next if it got too out of hand. That’s exactly what happened, and the Thunder won easily by a misleading score of 102-92.

Kawhi Leonard took a shot to the head but the team says he’s fine.

The Spurs return to San Antonio to take on the league-leading Golden State Warriors in a another nationally televised tip-off on Saturday at 7:30pm.