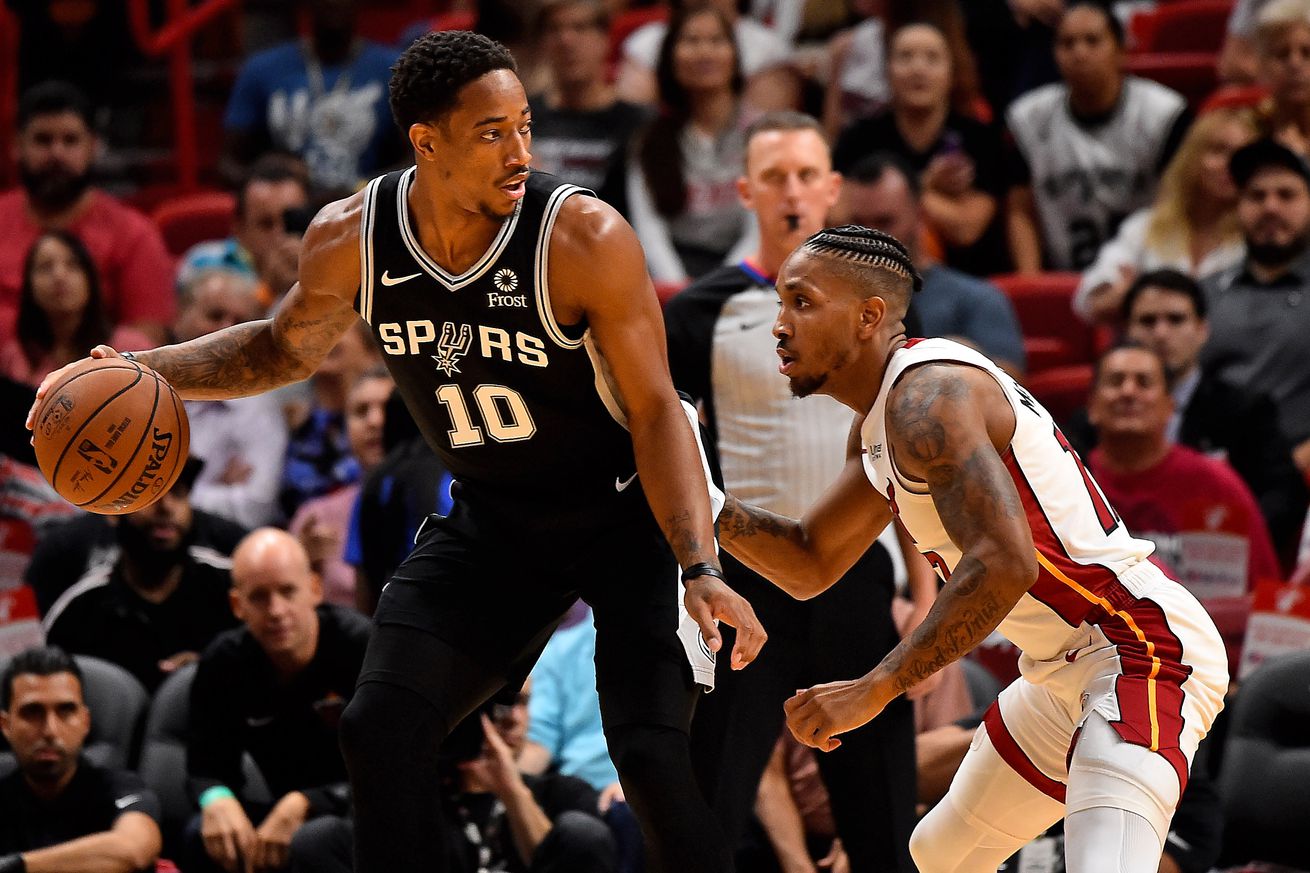 America turned back the clock one hour last weekend, and the American Airlines Arena in Miami turned theirs off entirely. The game started a little late due to technical difficulties with the clock in the arena, and the Spurs couldn’t get in rhythm on either end. They made a run late in the fourth only to end up dropping a road game against the Heat.

Sliding in place of Rudy Gay, who was out with an injury, was Derrick White who looked quick and mostly comfortable on the court. Unfortunately the team overall did not look comfortable because the Heat’s interior defense denied the Spurs early and often. After yielding 13 unanswered points, an unhappy Gregg Popovich pulled all five starters and inserted Patty Mills, Marco Belinelli, Davis Bertans, Quincy Pondexter, and Jakob Poeltl. The first quarter ended with the Spurs clawing back to a respectable 20-26 deficit.

Both teams blocked several shots with Aldridge and White each having one of their own to keep Miami from adding to their lead in the second quarter. Notably, Hassan Whiteside terrorized the Spurs to the tune of 7 blocks in the first half. Patty Mills’s shooting and Bertans’s four point play helped close the gap. Although the good guys started very slow, San Antonio closed out the half down only eight.

After the break, San Antonio started the second half without White as Popovich wanted to take advantage of Mills’ hot first half scoring, asking him to shoulder the offensive responsibilities. The Spurs found it difficult to carve into the lead (San Antonio shot only 29% from the field), and the Heat’s defense kept it that way. The third period closed with the Spurs down 11.

The fourth quarter started no different as the Heat just kept out-hustling the Spurs at either end. Bertans’s shooting kept the Spurs just on the edge of a significant run to try and cut into a double-digit lead. Back-to-back déjà vu quarterback passes from DeRozan to Bryn Forbes finally cut the lead to single digits. In the end, San Antonio lost this one as they missed Rudy Gay’s scoring and Pau Gasol’s size down low.

Whiteside had his best game of the season racking up 29 points, 20 rebounds, and one block away from a triple-double. While the Spurs had help at point guard, it was obvious that they missed both Gay and Gasol in a game where any scoring on their side might have flipped the score in the end. As a result, San Antonio suffers its first two-game losing streak this season.

The boys in Silver and Black return home on Saturday to face a Houston Rockets team (4-5 before their game against the Oklahoma City Thunder on Thursday) still finding traction in an underwhelming season so far.