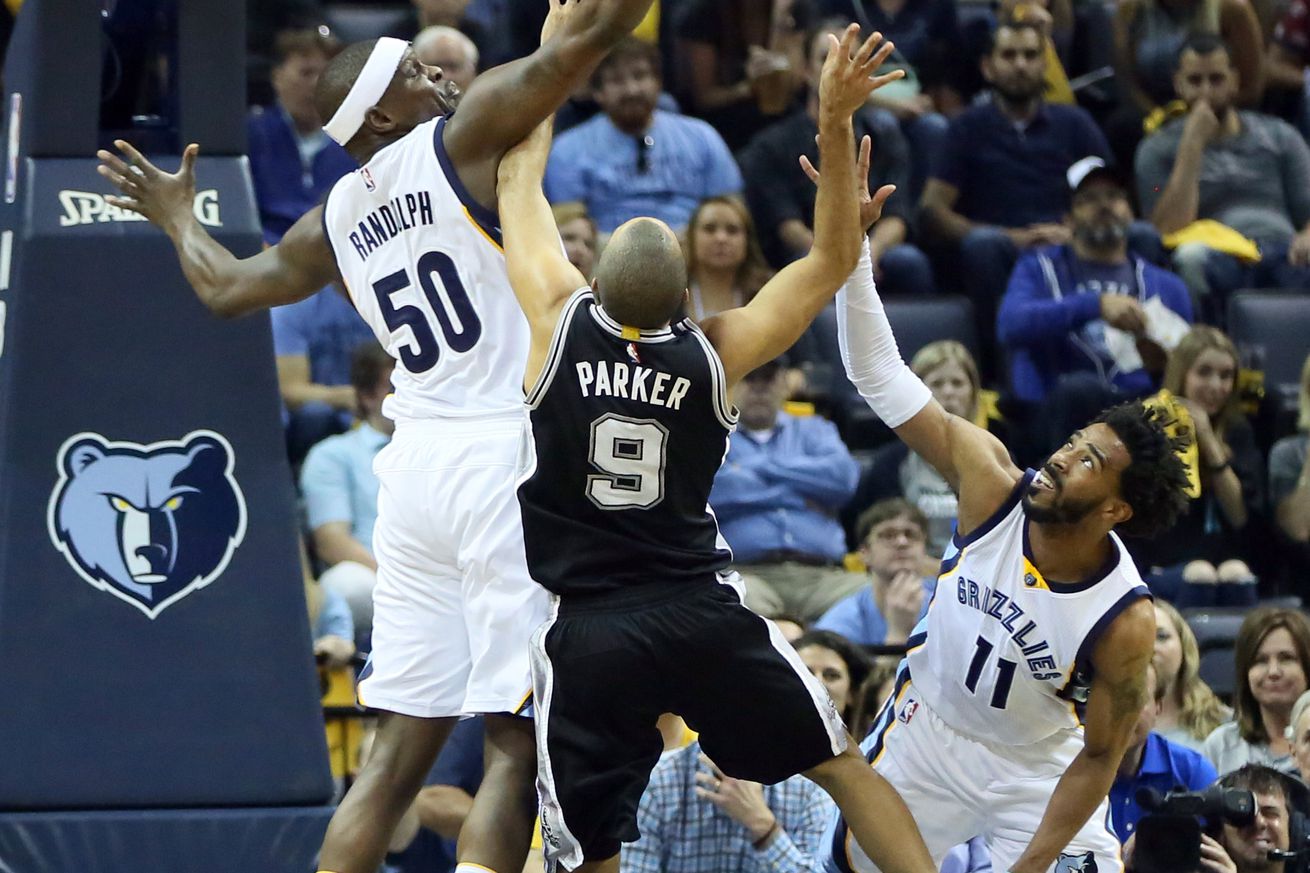 The Grizzlies were a tough opponent for the Spurs, but the Silver and Black closed them out on the road behind strong performances from Tony Parker and Kawhi Leonard

The Grizzlies gave the Spurs all they could handle for about 45 minutes of tonight’s game, but Tony Parker and Kawhi Leonard made key plays down the stretch as they closed out the Grizzlies on the road to win their first round series in six games.

The first quarter started off looking good for the Silver and Black as they rushed out to an 8-2 lead behind playoff Tony Parker’s scoring. But Vince Carter brought them back with clutch shots. The Grizzlies got unexpected contributions from their bench with Andrew Harrison providing a pair of triples. The Spurs seemed to be outplaying the Grizzlies as the quarter wore on, but a bad turnover with 8 seconds left gave Mike Conley the opportunity to bring Memphis back to within a basket, with the Spurs leading 24-22 after one.

The Grizz started off the second half quickly, scoring a quick pair of baskets, getting to their largest lead, 54-45. LaMarcus Aldridge had some great looks at the basket, and they just didn’t fall. After an Ennis three, the Grizzlies led by 10 and Pop needed a time out for the Silver and Black. The teams traded baskets for a while, but finally Danny Green hit a three point shot to cut the deficit to 5 halfway through the quarter. The Spurs kept junking up the game, and it was only fitting that LaMarcus was able to help the Spurs regain the lead with 3 minutes left on a putback and one. The Spurs bench players picked up the intensity and a Ginobili 4 point play put the Spurs up 73-69. Once again, Conley hit a late clutch three, and after a series of miscues to end the quarter from both squads, the Spurs led 75-74 with 12 minutes to play.

Kawhi Leonard had to take a rest early in the fourth, and the challenge for the Spurs would be to keep the game under control until he could come back in to finish the game. The Grizzlies were leading by 3 when Kawhi and Tony came back with about 9 minutes left. But some interesting shenanigans where Conley drew a foul where he barely got touched staked the Grizzlies to a 7 point lead. But the Spurs weren’t done, as Kawhi put in a floater while being fouled by Z-Bo to cut the lead to 4. After another Kawhi triple, the Spurs were within a point with about 5 minutes to play. Patty Mills finally regained the lead for the Spurs with a triple to put them up 92-90 with 3 minutes left. The Grizzlies tied it again with a free throws from Marc Gasol, but David Lee and Tony Parker hit clutch shot to put the Spurs up 4 with two minutes left. Vince Carter hit a pair of free throws but Parker answered. The Grizzlies finally missed a shot and had to start fouling with under a minute left. Again, Mike Conley drew a questionable foul call to earn three shots and cut the deficit to three with 28 seconds left. Or so everyone though, until Conley missed the third shot, leading a breakaway layup from Tony Parker. Those turned out to be the points that sealed the game for the Silver and Black as they won 103-96

Reaching back to 1909, when Tim Duncan was a rookie.

The Spurs have a few days off before they start their second round series against the Houston Rockets in the AT&T Center. I’ll update the story when I find out the schedule.