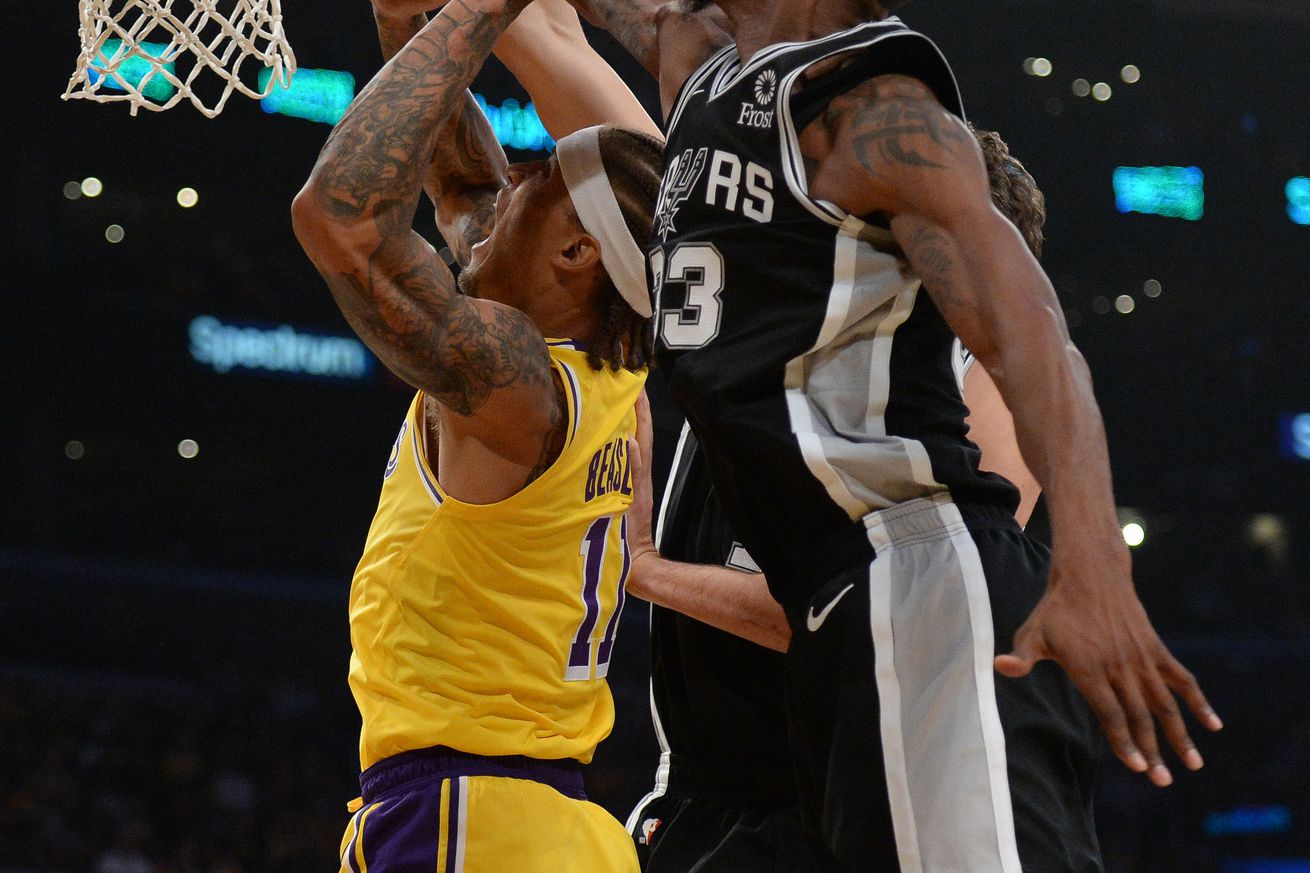 Last minute heroics from Rudy Gay and Patty Mills help the Spurs pull out an exciting overtime win against the Lakers.

The Spurs won their first road game since February 25, and they won it the hard way, barely pulling out a win in overtime with a late scoring run after almost losing it in regulation when the Lakers ran off an 8-0 run to tie the game at the end of regulation. LaMarcus Aldridge scored 37 and DeMar DeRozan scored 32, but it was late baskets from Rudy Gay and Patty Mills that sealed the win for the Silver and Black. Bryn Forbes continued his improvement by hitting clutch shots under pressure over and over and played a big role in the big win.

Lonzo Ball started out the scoring with a deep triple to put the Lakers up by 3, but Demar DeRozan quickly answered with a midrange. The Spurs led 5-3 after a deep shot from Dante Cunningham, and the Spurs raced to an early 24-7 lead with their midrange game, and hot shooting, starting 11-12 from the field. Finally Ball hit a shot to staunch the sucking chest wound of the Lakers defense with 5 minutes left and—then Lakers reeled off 6 points in a minute, leading to a quick Gregg Popovich timeout. That seemed to right the ship, as the bench unit, led by Patty Mills and Marco Belinelli extended the lead while DeRozan and Aldridge were able to get some rest, and the Spurs led 40-26 after a quarter. A couple of late baskets from Kyle Kuzma and Lance Stephenson were the only things keeping it from being a runaway.

The second quarter started with some hot shooting from the Lakers and they cut the lead to single digits with a Josh Hart triple after a Kuzma layup. The Lakers found their intensity and cut the lead to six with a JaVale McGee putback off of a Kuzma miss (or maybe it was a pass) with 8:00 left. But the Spurs quickly pushed the lead back to double digits with a LMA jumper and a steal by Forbes of LeBron James that should have probably been called a foul. Luke Walton thought so too and got called for a tech because he let the referees know about it. The 11 point lead was short-lived, as the Lakers went on a run, taking the ball back at the Spurs when they missed with Javale McGee feeding their energy spike and Kuzma’s the finishes, and the Spurs led by just one point, 51-50 with 5 minutes left. Marco Belinelli put his quick release to work to hit two quick triples to put the Spurs back as the Spurs went on an 11-1 run to regain a semblance of control. But the Lakers’ intensity was unlocked and they kept the heat on as the Spurs led 65-60 at the halftime buzzer. The energized Lakers were starting to look scary, and the Spurs defense was starting to look leaky.

Aldridge started the second half scoring with a midrange jumper, but James answered. Rudy Gay was able to get extend the lead, just outrunning Javale McGee down the court to dunk it before it got blocked. James started to heat up with seven quick points early, but Aldridge answered, using his size to get buckets, drawing a couple of fouls on McGee to get him out of the game. The Lakers kept chipping away at the lead and cut it to just three halfway through the quarter. But LMA took advantage of his mismatch against Ivica Zubac to get easy baskets in the paint. Lance Stephenson and LeBron hit deep shots, but Aldridge kept abusing Zubac. The Lakers kept fighting and cut the lead to one point late with a Stephenson and-one with just under three minutes left, eventually tying it at 96 with a minute left on a deep Josh Hart triple. Only a Davis Bertans triple kept the Spurs from being overtaken, as they led 99-96 after three quarters.

DeRozan opened the final quarter with a smooth turnaround in the paint, but LeBron walked into an open three-point shot on the other end to cut the lead to a pair. When Josh Hart hit a corner three, the Lakers took a 104-103 lead. DeMar feeding the ball to Pau Gasol for a dunk got the Spurs back into the lead, but LeBron hitting a pair of freebies put the Lakers back up. The lead seesawed back and forth until DeRozan and Forbes hit back-to-back threes to put the Spurs up by 5 halfway through the quarter. The dynamic scoring of the Lakers continued, with LeBron running over defenders to get to the basket. But the Spurs delivered in crunch time, with Bryn Forbes hitting a clutch three, and LaMarcus putting back a DeRozan miss to give the Spurs a 128-120 lead with 1:10 left. It seemed like it was safe, but it wasn’t. Javale McGee made a quick basket, and another Kuzma triple cut the lead to 3. After another Spurs miss, and LeBron tied it up with a deep triple with just 2.3 seconds left. The Spurs used a time out to advance the ball. DeRozan had a shot at the buzzer, but it missed, with the teams knotted at 128.

Aldridge opened up the overtime period by drawing a foul on Javale McGee, finally getting him out of the game with his sixth. He hit one of his two foul shots giving the Spurs a one point lead. But the Lakers once again went on a run with LeBron taking over and other players hitting their shots as they rushed to a 134-130 lead with 3:27 left. Forbes hit a shot, but Ball answered. After a Johnathan Williams shot on a LeBron assist, the Lakers lead was six with about 2 minutes left in the extra period. The Spurs came close, but the Lakers came out with a scrum to get a breakaway score for LeBron to extend the lead to six. It still wasn’t over. A quick Bryn Forbes layup and a Rudy Gay triple cut the lead to one with 12 seconds left. They had to foul LeBron, who missed a pair of free throws. On the following possession, Patty Mills hit a midrange to give the Spurs a one point lead with just 6.8 seconds left. LeBron James took the final shot for the Lakers and it bounced off the iron as the clock expired, Spurs win 143-142.

Here’s a guy who the Lakers might want to look into. At 6’8”, he’s got size, and he’s also a seasoned performer, and he looks like he might fit in with the team’s culture. I present to you Big Mike Geier, who is better known these days as Puddles Pity Party.

The Spurs return home to face the Indiana Pacers on Wednesday at 7:30 PM. Victor Oladipo is set to have a breakout year, and they have a talented young roster that should be a lot of fun to watch.